After the 2. SS-Panzer-Division Das Reich had broken out of the area northeast of Avranches towards the southeast on the night of the 28./29.07.1944, it aimed to create a new frontline along the line Percy-Sourdeval. In this time SS-Sturmbannführer Krag built up a blocking line on his own initiative opposite the enemy forces that had penetrated into Gavray. By this he prevented a hostile thrust into the deep flank of the Division.

Krag acted within a clear understanding of the situation, and despite being all on his own with only weak forces at hand he managed to achieve a full defensive success against overwhelming enemy armoured forces. This brave battle fought by SS-Sturmbannführer Krag and his Abteilung enabled his Division and the other units of the LXXXIV. Korps to build a new front.

Krag and his Abteilung destroyed 9 enemy tanks in the Gavray area, along with a great number of armoured and unarmoured vehicles. They also inflicted bloody personnel losses upon the foe.

Krag is a brave and exemplary leader. On the grounds of his initiative and brave personal actions I hold him as worthy to be awarded the Knights Cross of the Iron Cross.

On the 02.01.1945 Krag and his Aufklärungs-Abteilung managed to intercept a strong enemy breakthrough east of Malempre (supported by 22 tanks) in their blocking position near Belle Haie. The Abteilung inflicted heavy losses on the foe, and during this display of ferocious combat they prevented the enemy from advancing to the crossroads at Baraque de Fraiture (a location of great importance for the continuation of the fighting in the area). Krag would go on to withstand a further strong enemy thrust on the 04.01.1945, again inflicting heavy losses despite having open flanks on both sides. In this engagement he launched a bold counterthrust with 8 Pionieren that succeeded in eliminating an enemy penetration and ensuring that the friendly blocking position remained firmly in our control by the evening of the day.

Through these actions conducted in the positions before the crossroads at Baraque de Fraiture, completed in spite of a danger of encirclement and a minimal number of men and weapons, Krag enabled the withdrawal of friendly elements to both the left and right. His accomplishments also gave the leadership an opportunity to undertake the urgently necessary repositioning of friendly forces, compelled the enemy to regroup and prevented a potential enemy breakthrough towards the southeast. 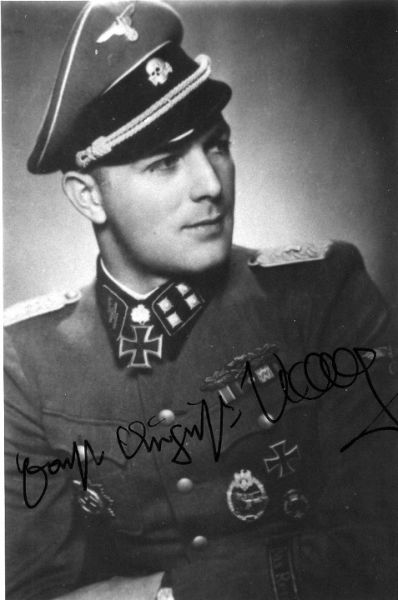