Hugo Laubereau was born January 20th, 1904, as the son to Leutnant Arthur Paul Laubereau and Bertha Laubereau born Obach. April 1st, 1924, he joined the Reichsheer, 19.(Bayerisches) Infanterie-Regiment in Munich. April 1st, 1928, he was transferred to 20.(Bayerisches) infanterie-Regiment in the rank of Leutnant, he was promoted to Oberleutnant on February 1st , 1932. Janury 4th, 1934, Hugo Laubereau was posted to the Kriegsschule in Munich as Aufsichtsoffizier.
August 31st, 1935 he was married to Charlotte Opbacher with whom he was to have four children, 1 son and 3 daughters.
November 1st, 1938, he was promoted to Hauptmann. October 1st, 1937 he was transferred to Infanterie-Regiment 62 in Landshut, where he was named Regiments-Adjutant on November 1st, 1938.
From September 1st, 1939 onwards Hugo Laubereau took part in the invasion of Poland. April 1st, 1940 he was posted as Führer III. / Infanterie-Regiment 62 in which capacity he was transferred to the Western Front and took part in the fighting there. He was hospitalized between May 22nd 1940 and 31st , 1941. January 1941 he was promoted to Major. From June 1st , 1941 until the end of January 1942, he was Taktiklehrer and Inspektions-Chef with the Lehrgruppe III of the Infanterieschule. Here he was promoted to Oberstleutnant on April 1st, 1942. From July 10th, 1942 until the end of January 1943 , he was posted as Lehroffizier with the Deutsches Heeres-mission in Rumania, subsequently he was transferred to the deputy Generalkommando VII.Armeekorps as IIa. From mid-June 1943, he served as Kommandeur Grenadier-Regiment 61 on the Eastern Front where he was wounded twice. October 21st, 1943 he was injured for the fourth time and his left leg had to amputated; he remained in hospital until June 21st, 1945. In the meantime he was promoted to Oberst on December 1st, 1943.
From June 1945 to May 1947, Hugo Laubereau worked in his wifes Schreib- und Übersetzungsburo. Between May 1947 and November 1951 he studied economics and graduated having passed a state examination on November 21st, 1951. Until September 1955 he was employed in a concrete factory. September 5th he rejoined the military in Dienststelle Blank and was posted to the Bundesministerium für Verteidigung in the rank of Oberst. From Janaury 20th, 1956 until March 31st, 1957 Hugo Laubereau served as Leiter der Annahmezentrale in Cologne and subsequently was named Leiter der Annahme Wehrbereich VI. December 1st , 1958 he was appointed Kommandeur des Territorialen Verteidigungsstabes VI B in Regensburg. He retired October 1st , 1962.
Hugo Laubereau passed away in Regensburg November 18th, 1997. 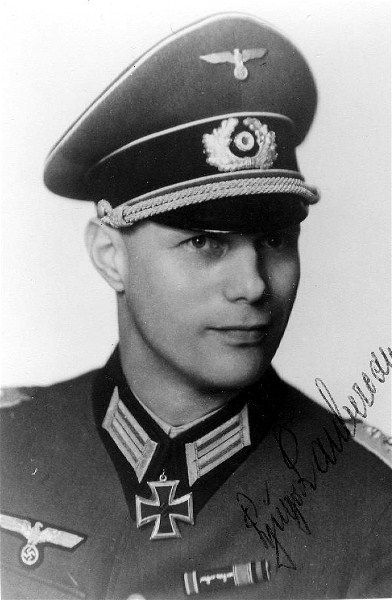