Citation:
"On Nov. 26, 1944, during the attack on the town of Kirchberg, Pvt. MacLellan accompanied the 2nd Battalion, 115th Infantry, as a wireman for the forward observer artillery party. During the initial phase of the attack, communication lines were severed on numerous occasions by enemy fire; nevertheless, Pvt. MacLellan succeeded in repairing the lines without delay. On nearing the objective, the battalion came under an intense artillery barrage, pinning elements of the infantry to the ground and disrupting communications again. Amid this enemy fire, Pvt. MacLellan, alone and with complete disregard for his own safety, retraced 200 yards of telephone wire,checking and repairing the lines. Just as Pvt. MacLellan had re-esatblished communication, he was mortally wounded by enemy fire, but his heroic actions had enabled the forward observer to direct deadly artillery fire upon the enemy positions."
29th Division General Orders 192.
In the 29th Divisional General Orders 192 is mentioned that the action took place on 26th November 1944. All other records of the 29th Infantry Division and After Battle Reports, show that the battle for Kirchberg took place on 28th November 1944 and not on 26th November. Presumably the General Orders state a wrong date. 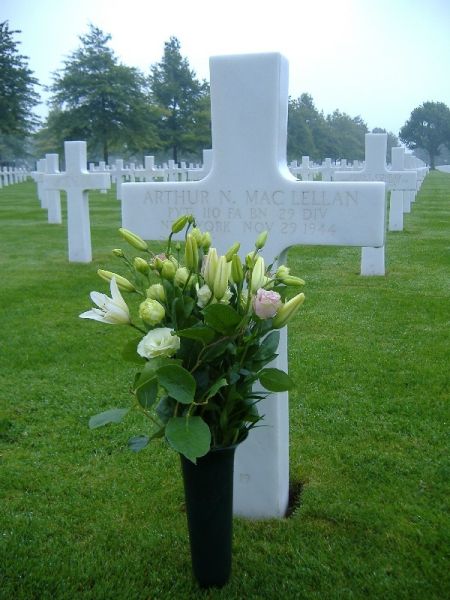