Albert Van Wersch joined the Belgian army on 24 September 1936 and was posted to the 3rd Regiment of the Aéronautique Militaire Belge. He joined III/2/Aé on 10 June 1937 and was to be formed as Reservist Observer-Air Gunner. He entered the Military Flying School in September 1937 and graduated as pilot a year later. Posted to 7/IV/1 Aé he participate with this unit in the 18 day campaign of May 1940 in which over 6000 Belgian soldiers died. During this campaign while executing a search and reconaissance mission above the enemy lines, his aircraft, a Fairey Fox VI, was hit by ground fire. Flying at low altitude and 10 miles from friendly lines he managed to bring his damaged aircraft back into friendly territory and force landed safely. On May 15, 1940, he retreated to France with his unit. The capitulation of France saw him returning to Belgium on August 10th, 1940. He evaded from Belgium in May 1942 and stayed in France until July 1942, the day he crossed the Spanish border and arrived at Gibraltar, 24 October 1942. He embarked on 12 November 1942 to Great Britain where he enlisted the RAFVR and was send to 5 PAFU (Pilots Advanced Flying Unit), Ternhill in February 1943, being retrained on Anson and Master. Send to 57 OTU (Operational Training Unit), Eshott, he made his first flight on Spitfire on 28 March 1943. Posted in as Sergeant to 350 (Belgian) Squadron on 1 June 1943 at Ouston. His first operational mission was performed on 26 July 1943 flying a Spitfire Mk Vb. On March 10, 1945, after 139 missions totaling 282 flying hours, he was rested and joined as Pilot Instructor the Belgian Training School of Snaiwell. He left the RAF in October 1946 and joined as pilot, the Belgian national carrier Sabena in May 1951. He also flew as reservist in the Belgian Air Force Auxiliary Squadron. Retreated from Sabena on January 1st, 1976. He died on 20 June 1998. 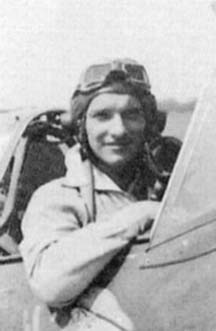