On 8 October 1943 Major General Barrett died of a cerebral hemorrhage as a result of a fall from the porch of his quarters in Nouméa. Following the war, he was reinterred in Arlington National Cemetery.

For exceptionally meritorious service to the Government of the United States in a duty of great responsibility as Assistant Commandant of the United States Marine Corps; Commanding General of the Third Marine Brigade; Commanding General of the Third Marine Division; and as Commanding General of the First Marine Amphibious Corps, prior to and during operations against enemy Japanese forces in the South Pacific Area, from 7 December 1941 to 8 October 1943. Assigned command of the Third Marine Brigade in March 1942, Major General Barrett welded this command into a superb fighting unit, advancing his forces to the shores of Western Samoa and organizing positions on Upolu and Savaili Islands. In conjunction with Naval Units stationed on the islands, he established important air and Naval facilities necessary to strengthen the chain of islands across the South Pacific and protect the vital line of communications to Australia. Returning to the United States in September 1942, to take command of the Third Marine Division, he developed a powerful striking force which was later to blast the enemy from his strongholds on Bougainville, Guam and Iwo Jima and thus pave the way for ultimate victory over the Japanese. Relieving the Commanding General of the First Marine Amphibious Corps on 15 September 1943, Major General Barrett, from his Headquarters on Noumea, New Caledonia, aided in formulating stragegical plans for the assault on Bougainville which was to end enemy opposition to the important development of the Empress Augusta Bay Area as an Allied Airbase and to advance United States control nearer to the shores of the Japanese Homeland. Serving in this capacity until his death on 8 October 1943, Major General Barrett instilled in the officers and men under his command his own spirit of determination and, by his sharp military acumen, his forceful leadership and his indomitable courage, served as an inspiration to his gallant Marines in carrying the fight to the enemy. His conduct throughout reflects the highest credit on the United States Naval Service. He gallantly gave his life in the service of his country.
Awarded posthumously. 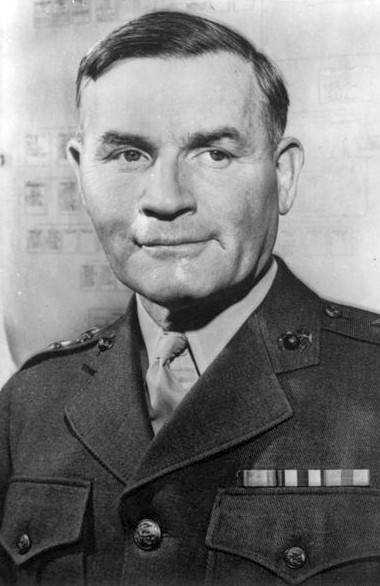