Citation:
On the afternoon of 4 September 1944, two troops of "B" Squadron 9 Canadian Armoured Regiment, were given the task of supporting two companies of infantry to clear and consolidate the high ground Northwest of MISANO. the objective was strongly held by infantry in dug-in positions and the advance was held up by machine-gun and mortar fire.
Lieutenant Looney realised that if the objective was to be captured before dark immediate action must be taken. He ordered his own troop to follow him to the objective and instructed other troop to conform. The advance was made over ground held by determined paratroops and, although the remaining tanks of the other troop were put out of action, Lieutenant LOONEY's skilful handling of his troop enabled it to reach the crest and repelled all resistance until the infantry came up to consolidate. Under heavy small arms fire Lieutenant LOONEY dismounted from his tank, armed with a pistol and grenades, proceeded to the house which was the main centre of resistance, and single-handed killed two and captured three of the enemy.

By his outstanding bravery and initiative Lieutenant LOONEY ensured the capture of the objective that evening." 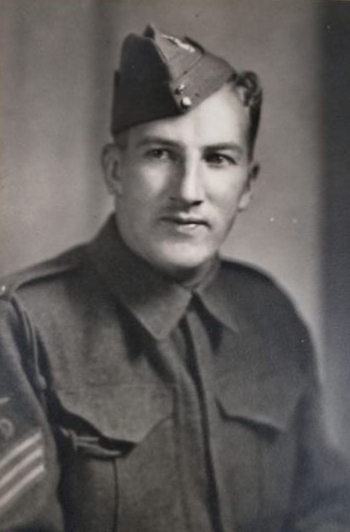