Clyde J. Shelton was born on December 13th, 1922. He joined Battery E, 2nd Battalion, 131st Field Artillerie Regiment, 36th Infantry Division of the Texas National Guard in late 1939 at the age of 16 years. The unit was mobilized on November 25th, 1940 and encamped at Fair Park, Abilene in Texas. Clyde Shelton became Private First Class as cannoneer with a guns section, 75mm gun of 2nd Battalion. The unit was detached from the 36th Infantry Division in late 1941 and was ordered to go to the Philippines.

He shipped in on the U.S.A.T. Republic in a convoy led by the U.S.S. Pensacola. The convoy was diverted to Brisbane, Australia when they were at sea between Honolulu and Manila on December 7th, 1941. From Australia the unit was attached to the 19th Bomb Squadron at Singosari Airbase in Malang, Java. When the U.S. Air Force was evacuated, the group was left behind. Clyde Shelton was taken prisoner on Madoera Island, March 10th, 1942. He was at first imprisoned in Surabaja Harbour and later transferred to a camp on Java. He was then transported to Singapore aboard the "Dai Nichi Maru" and was held in Changi Camp. After this he was shipped to Nagasaki, Japan to Slave Labor Camp Fukuoka II, to work in the Kawaminami Shipyards. After two years he was transferred to a Coal Mine Labor Prison Camp near Orio, Japan. Clyde Shelton was liberated here on September 18th, 1945 and evacuated from Nagasaki aboard the U.S.S. Haven hospital ship.

Received with clasp for "FOREIGN SERVICE".

Received with a bronze campaign star. 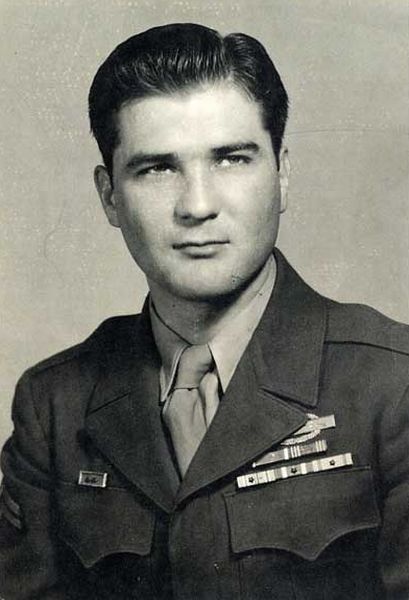