Citation:
"This officer was parachuted into France on 29th November 1944, as assistant to an organiser who was taking over the direction of an important circuit in Central France. The day after their arrival she and her chief found themselves stranded and without directions through the arrest of their contact, but ultimately reached their rendezvous by their own initiative. She worked for several months helping to train and instruct Maquis groups.
Lieutenant Wake took part in several engagements with the enemy, and showed the utmost bravery under fire. During a German attack due to the arrival by parachute of two American officers to help in the Maquis, she personally took command of a section of 10 men whose leader was demoralised. She led them to within point-blank range of the enemy, directed their fire, rescued the two American officers and withdrew in good order. She showed exceptional courage and coolness in the face of enemy fire. When the Maquis group with which she was working was broken up by large-scale German attacks and wireless contact was lost, Lieutenant Wake went along to find a wireless operator through whom she could contact London. She covered some 200 kilometres on foot and by remarkable steadfastness and perseverance succeeded in getting a message through to London. It was largely due to these efforts that the circuit was able to start work again. Lieutenant Wake's organising ability, endurance, courage and complete disregard for her own safety earned her the respect and admiration of all. The Maquis troops, most of them rough and difficult to handle, accepted orders from her, and treated her as one of their own male officers."

Citation:
"Ensign Nancy Wake, British National, FANY, for exceptionally meritorious achievement which aided the United States in the prosecution of war against the enemy in Continental Europe, from March 1944. After having been parachuted into the Allier Department of France for the purpose of co-ordinating Resistance activities she immediately assumed her duties as second-in-command to the organiser of the circuit. Despite numerous difficulties and personal danger she, through her remarkable courage, initiative and coolness succeeded in accomplishing her objective. Her daring conduct in the course of the enemy engagement safeguarded the lives of two American officers under her command. Her inspiring leadership, bravery, and exemplary devotion to duty contributed materially to the success of the war effort and merit the praise and recognition of the United States."

Companion to the Order of Australia (AC)

Citation:
"The award recognises the significant contribution and commitment of Nancy Wake, stemming from her outstanding actions in wartime, in encouraging community appreciation and understanding of the past sacrifices made by Australian men and women in times of conflict, and to a lasting legacy of peace."

Received with two bronze palmes and a silver star. 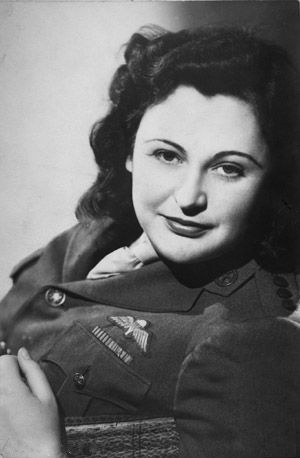