Philipp Bouhler was born September 11th, 1899, the son of Emil Bouhler, Oberst in the Bavarian army. After his training he joined the Bayerischen Kadettenkorps.
From July 16th, onwards, he served as Fanhenjunker in 1. Bayerisches Fußartillerie-Regiment where he was promoted to Leutnant. On August 8th, 1917, near Arras he was gravely injured.
After World War One he resumed his studies and went to work in a publishing firm. Philipp Bouhler joined the N.S.D.A.P. as early as July 1922, serving in various functions. From July 2nd, 1933, he was a Reichsleiter in the N.S.D.A.P.
From 1939 onwards, Bouhler was responsible for the so-called Aktion T-4, better known as the euthanasiaprogram for physically and mentally disabled persons. Beginning in 1942, Bouhlers influence in the N.S.D.A.P. started to wane. Near the end of the Second World War, he joined the followers of Hermann Göring. On April 23rd, 1945, on orders of Adolf Hitler, he was arrested in Berchtesgaden by the SS and stripped of all his functions. He was released however on May 1st, 1945 after Hitler had committed suicide. He was captured by American troops on May 9th, 1945. He committed suicide with cyanide on May 19th, in an American prisoncamp in Zell am See, when he was about to be transferred to the Internierungslager (prisoncamp) in Dachau. 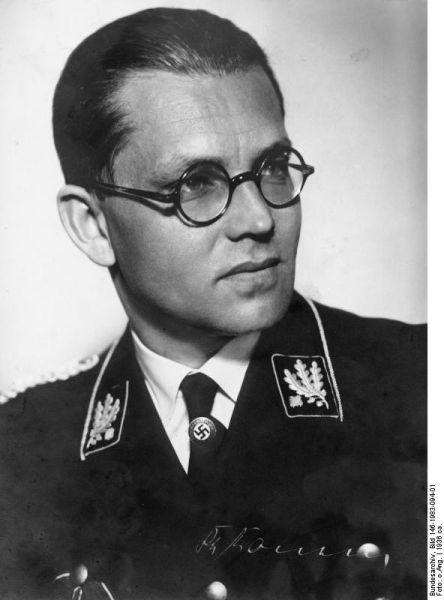