William John Spraggs was born in the Misericordia Hospital Winnipeg Manitoba Canada on the 6th June 1920. He was the son of Frank Clement Spraggs and Margaret Mary LaLonde. William had one older brother, his name was Ed.

William volunteered at 21 and joined the 2nd Battalion Algonquin Regiment as a gunner. Then one day they called for volunteers for the Signals corps, but you had to have a high School certificate. William had no certificate but he stepped forward anyway and no one checked so he was in. He was in the 1st Canadian Division G.Section Royal Canadian Corps. Signals attached to 3rd Field Regiment and they in turn where attached to the 8th Army.
They came to England on 11 May 1942 and he was here when the raid on Dieppe took place in August 1942. He was stationed on the South coast. The raid was a disaster and afterwards they had all there insignia and identification taken off them and they were not even allowed to speak to anyone in case they recognised the Canadian accent. They were then sent up to Scotland and then went overseas. He was involved in the invasion of Sicily on 10 July 1943, then across the Straits of Messina for the invasion of Italy in September 1943. He was in Italy for one year and eight months.
The most famous Battle he was involved in, was the Fourth battle for the monastery at Monte Cassino, On the night of 11 May 1944, they had to tune the radio sets on the guns to the same frequency so all the 1600 guns opened up at the same time (11pm) he said the mud was terrible and they where bogged down a lot of the time. The German shells would land in the mud and not explode.

On one occasion the convoy he was in was shelled and they had to get out of their trucks and run for a ditch in a field. He jumped in but the guy behind him was hit by machine gun fire from a German plane, he landed on top of him and was killed when they got out of the ditch. They called for a medic because William was covered in blood and they thought he was wounded, but he was fine.

There was a German soldier, that someone had buried but he was flouting up in the mud and was on the mess line so they used to stamp him down while they queued up for their meals, someone put up a sign (Hes dead but he wont lie down),

They where billeted in a stud farm and where living in the loose boxes, when one day the Royal Engineers came in. They had been clearing anti tank mines but they were made of glass so they could not be detected. Someone ran off to get an officer as one of the engineers lifted a mine from the back of the Land Rover, and dropped it, the next thing they were running around poking the bits of bodies out of the trees.

William was in a forward observation post and they were trying to direct fire from their 25 Ponders onto a German Tiger Tank that was holding up there infantry, but the Tank was well hidden in the ruins of a farm house, so they called up a spotter plane. After they sent back the coronets the next shell landed right on top of the German position, they herded the tanks engine start up and watched it move out, then a very English voice came over the radio from the plane, he said that bloody well made him move.

The convoy was pulled in under a line of trees for the night but it was the only cover for miles and they said the German artillery would come looking for them, Williams truck dug slit trenches, later on they were in the back of the truck when they heard a noise when they looked out the sky was lit up by parachute flares, so they run for their slit trenches, he could see people being blown out from under their trucks. But they were safe.
He was in Rome during the war and the troops had ordnance with the Pope at the Vatican, They moved up into Holland where they finished the War. He spent several evenings with the family Emck in the Molendijk in Ridderkerk just before V E day. He played the guitar for them which he had bought in Italy when he was first there. He loved to play the guitar and played it for the rest of his life.

After the war he went back to Canada, but shortly after that he went back to England to marry his girlfriend Annie Stephens which he had met at the beginning of the war, when he visited his English relatives. He stayed in England for the rest of his live and died in 1987 from cancer.

With clasp (the clasp if you served overseas) 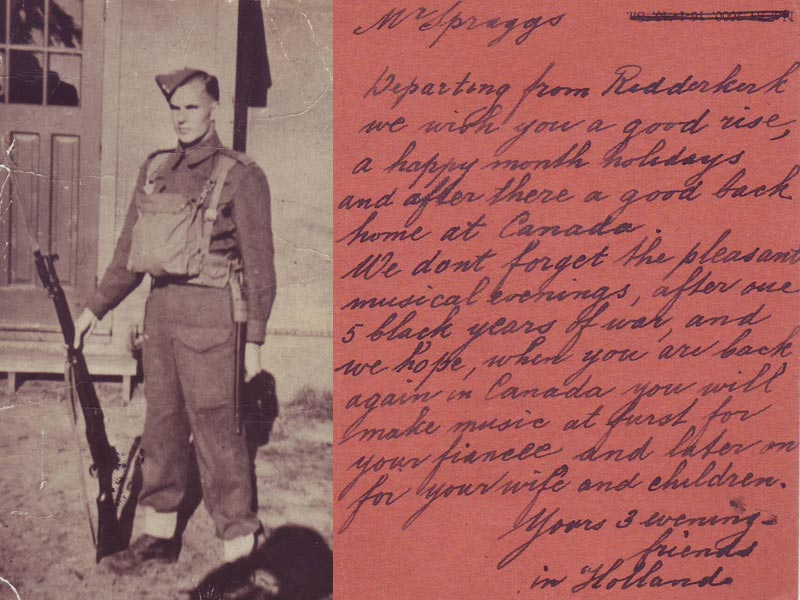