Douglas Weatherill joined the Royal Air Force Volunteer
Reserve in 1942 and following his training he was posted for operational flying as a Mid Upper Gunner to 158 Squadron which flew with Halifaxes. The squadron was partially engaged for operations with Coastal Command and Weatherill flew in his first Anti-Sub
Patrol in November 1942.
Subsequently the squadron was relocated and resumed operations with Bomber Command. Weatherill flew to Mannheim on December 6,1942.
Weatherill went on to fly another 27 operational sorties with the Squadron, including: Lorient (4), Turin, Essen (2), Nuremburg, Stuttgart (2).
On the return flight from a mision to Coubronne, in Lancaster III
ND734 TL-H, piloted by Squadron Leader Ingram DFC to mark a V1 site, the crew was shot down from 11,000 feet by a night-fighter in the vicinity of Dunkerque; both the pilot and Weatherill where killed, whilst the remaining 6 members of the crew were taken POW;
Flying Officer Weatherill was 22 years old.

Recommendation:
"On the night of the 31st August, 1943, this Officer was Mid Upper Gunner in an aircraft detailed to attack Berlin. Whilst over the target the aircraft was attacked by three enemy night fighters.
On the first attack the rear turret was rendered unserviceable. P/O Weatherill then took over fire control, gave his pilot evasive action and succeeded in avoiding the enemy's fire whilst damaging one of the attacking aircraft, which was probably destroyed.
The safe return of the aircraft was undoubtedly due to this Officer's promptitude in taking over fire control.
In addition, he has now completed 28 operational sorties against such heavily defended targets as Essen, Mannheim, Duisburg, Stettin, Nuremburg and 3 to Berlin, on which he has proved himself to be a gunner of outstanding qualities, and on many occasions his prompt and accurate fire against enemy night fighters has been responsible for the success of the sortie and the safe return of the aircraft and crew.
Remarks of Station Commander:
A particularly fine piece of work, which there can be no doubt resulted in the aircraft not only bombing its objective but returning to its Base to fight again another day.
This example typified this Officer's outstanding operational career in which he showed magnificent qualities of courage, determination and devotion to duty.
He is very strongly recommended for the Immediate Award of the Distinguished Flying Cross." 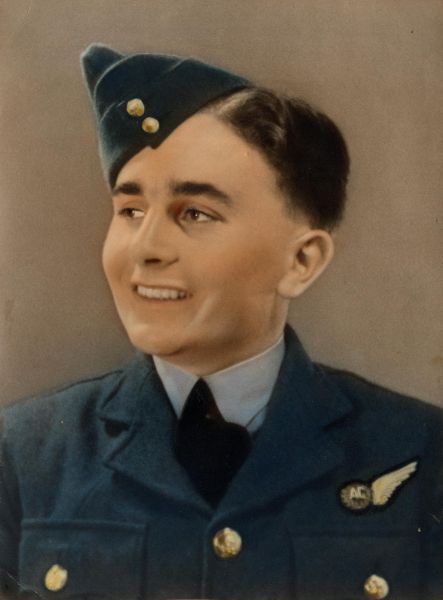