"General GRASETT joined General EISENHOWER's staff on 16 June 1944 as A.C. of S, G-5, in which capacity he has since then been charged with the duty of planning, organising and executing the Civil Affairs operations in connection with the invasion of N.E. Europe.
In addition, General GRASETT has been charged with regulating liaison betwen SHAEF and the Governments and Military Authorities of out European Allies.
General GRASETT has performed his multifarious and unprecedented duties in a manner deserving of the highest praise. His unfailing tact and cheerfulness, his ever ready wit and sympathy, his great knowledge of the world and its ways and his resourceful commonsense have enabled him to cope with any and every situation.
The successful work of G-5 throughout the campaign, with its multifarious and very largely to General GRASETT's fine leadership and example. This sphere of work at Supreme Hq. has both smoothed the path of the armies through the liberated territories and has minised the effort required to organise the rearward areas. To his credit also may be laid to a notable degre the not inconsiderable assistance being afforded by our minor Allies. In all, General GRASETT's outstanding services have been such as to render him worthy of very high reward." 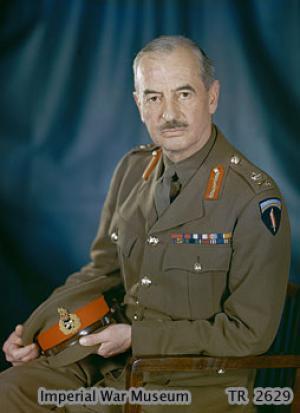