Recommendation:
Able and courageous pilot, young officer with a high level of patriotism; was taken prisoner in 1940, escaped from Belgium and reached Great Britain after having suffered in harsh prisons in France and Spain. Since June 1943 he has proved himself on operations as a Squadron Leader with a highly developed offensive mentality. Even severe injuries did not prevent him from taking part in the fight. By returning to the squadron, he set an example of someone who continuously personifies the strong will to fight. He has taken part in 259 offensive operations totalling 255 flying hours in which he has destroyed 20 vehicles, he has sunk a barge and damaged one Ju 88, 23 vehicles and seven barges. During one of his last attacks, his aircraft was so severely damaged by enemy fire, he was forced to crashland 200 yards from the front line. The squadron under his command destroyed five aircraft, over 300 enemy vehicles and destroyed three other aircraft.
Recommendation for the Bronzen Leeuw:
For courage he displayed with his squadron after having joined Belgian forces in Great Britain and having defied many dangers.

With Palme and Bronze Lion.

Recommendation:
2nd Lieutenant-pilot on active service took part in the campaign of 1940. He escaped from imprisonment and joined the R.A.F. in England after having been imprisoned in France and Spain. He immediately distinguished himself during operations and became Flight Officer in a Belgian Fightersquadron of which he subsequently took command. He has led his squadron on many successful operations, personally destroying a sizable amount of enemy targets and has damaged one enemy aircraft. His briljant conduct under fire has gained him a high British decoration, the DFC. 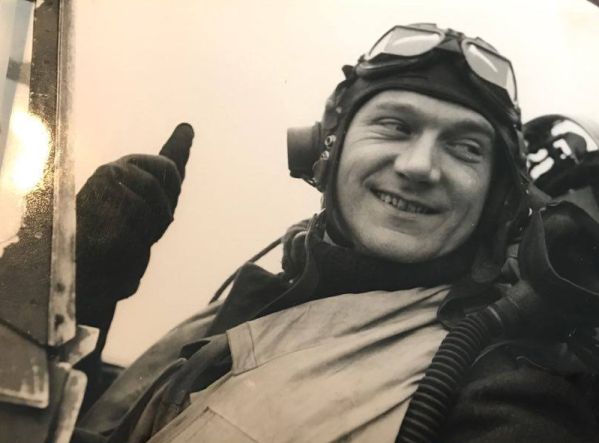