Manfred Bronny was the son of baker Adolf Bronny. The family emigrated to Canada in 1929. At that time the family lived in Karchowitz (Oberschlesien), now Karchowice (Poland). From 1926 the father had his own bakery there.

How he ended up with the Kommandokompanie 150. Panzerbrigade is unknown. His Teammates were Hans Reich, Günther Schulz and Karlheinz Weisenfeld. The team was arrested at Liège on 19.12.1944 between 9 p.m. and 10 p.m.

The circumstances of the arrest are well documented since Leutnant Schulz was used as a witness against his comrades in the Bronny, Reich and Weisenfeld trial. Schulz only received his trial later.

Manfred Bronny, Hans Reich and Karlheinz Weisenfeld were executed on 26.12.1944. According to the documents in Henri-Chapelle. It is not clear whether the same location was used for the Billing team.

Leutnant Schulz received his trial in 1945 and those documents were added to Otto Skrozeny's documents. 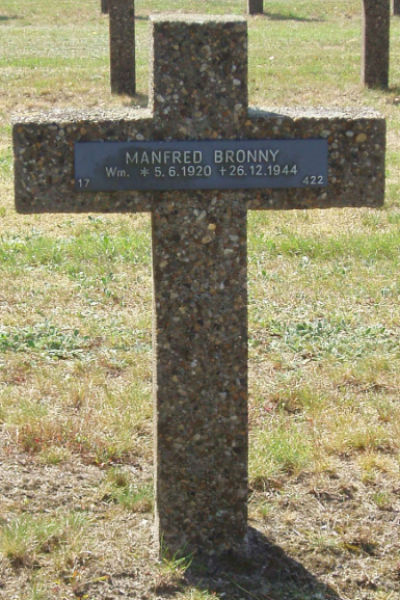