"On January 25, 1945 Nikishov's platoon was one of the first to cross Oder in the vicinity of the settlement of Rattvitz to the southeast of Breslau and took an active part in the battles for the capture and retention of the bridgehead on its western shore, repelling six German counter-attacks. In those battles Nikishov personally knocked down two enemy tanks"

He was wounded five times. 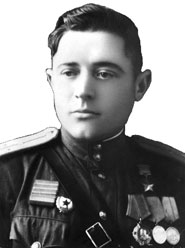