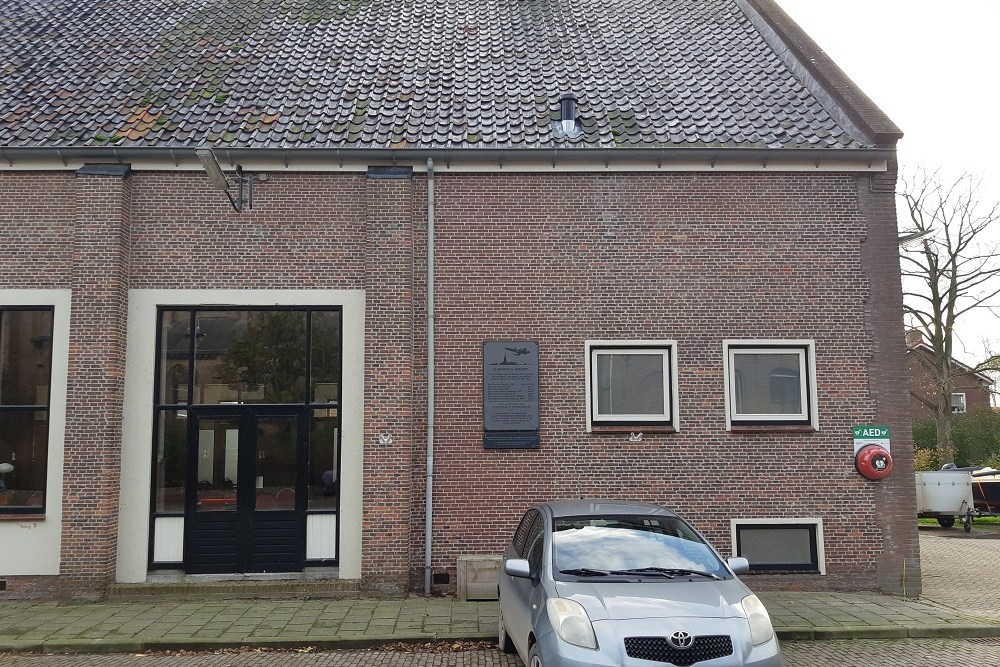 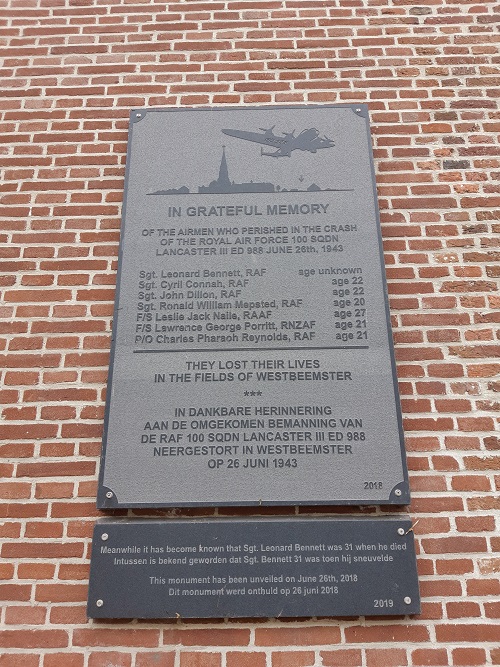 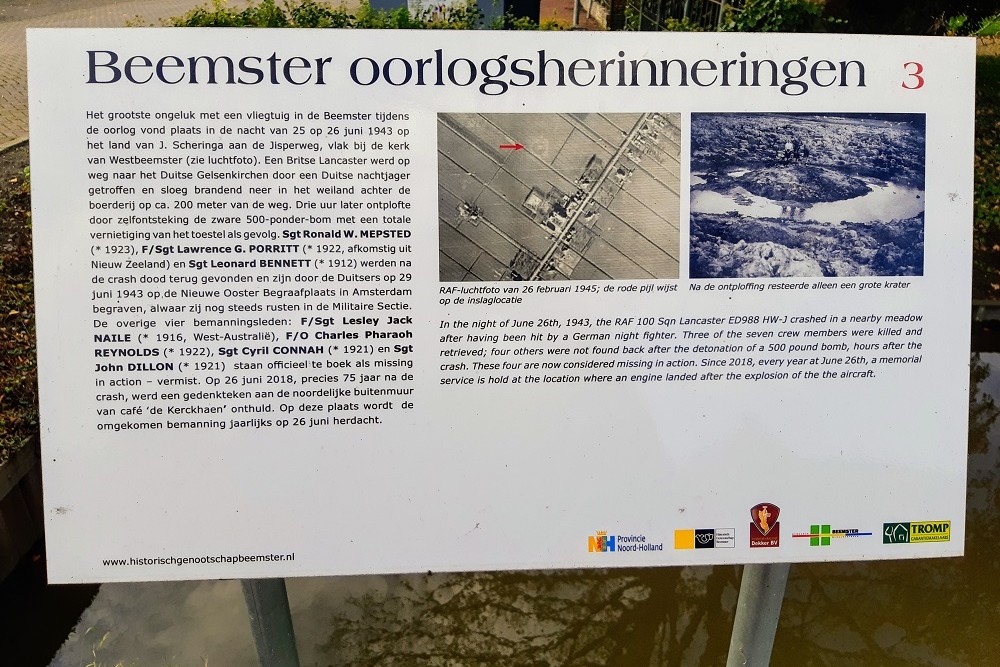 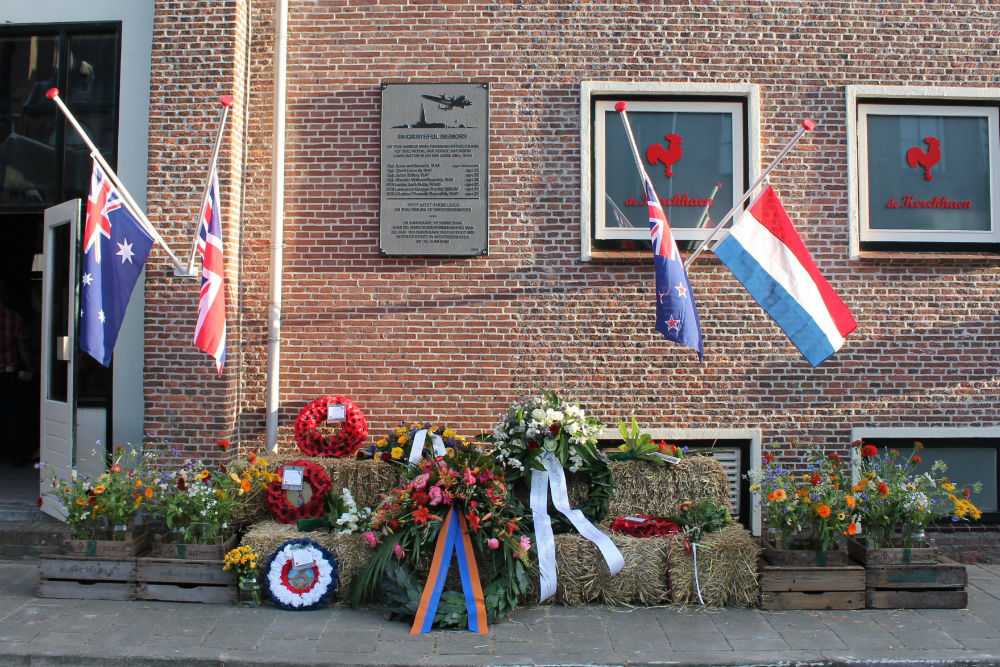 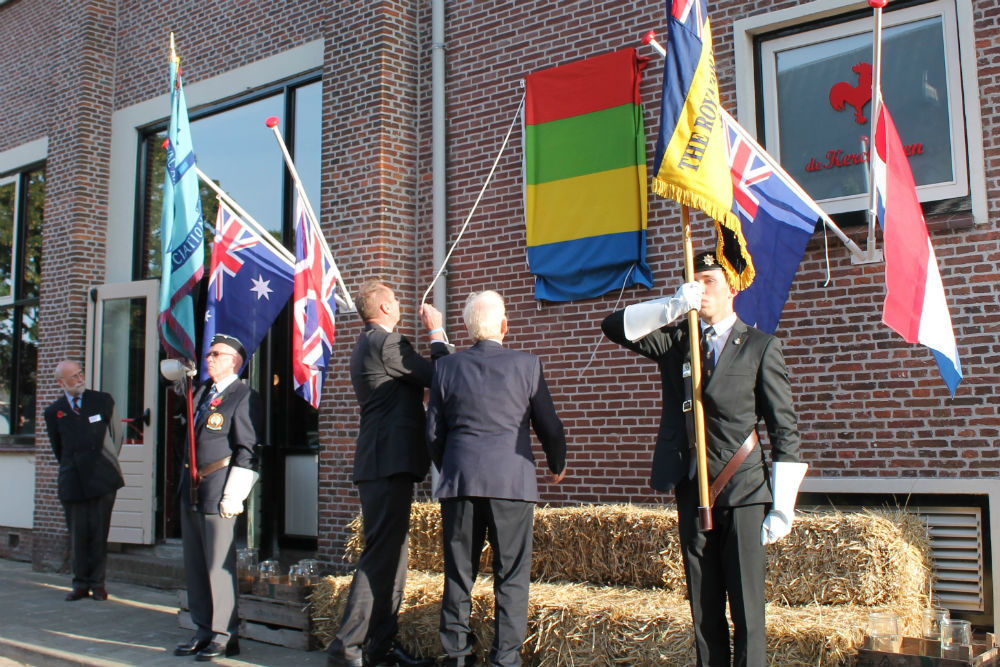 Memorial for the fallen crew of the crashed Lancaster on June 26, 1943.

After 75 years a monument to seven killed war heroes of the Lancaster bomber 988 ED
On a Tuesday evening, June 26, 2018, a memorial stone was unveiled at the Kerkplein in Westbeemster, organized by working group Monument Aircrash Westbeemster, in memory of the killed occupants of the Lancaster bomber 988 ED, who died there on the night of June 25-26. 1943 crashed into a nearby pasture.

The plane took off from the English air base Grimsby in Lincolnshire, East of England on the night of 25 to 26 June 1943. It was part of a formation with target Gelsenkirchen in the German Ruhr area. When approaching the Dutch coast near IJmuiden, the German Flak (anti-aircraft) fired. The ED 988 was hit and a fire broke out in the engines of the left wing. The plane became uncontrollable and came down in a gliding flight, in which one of the broken off engines crashed into the front of De Kerckhaen after a jump over the roof of the church. The owner of the meadow, J. Scheringa and his neighbor P. Dekker rushed to the disaster site.

According to Scheringa's statement, one or more crew members disappeared into darkness and initially this was referred to as survivors, but it can be assumed that all seven crew members did not survive the disaster.

Bennett, Mepsted and Porritt (from New Zealand) were taken from the wreck by the Germans before it exploded with enormous force about two hours later. She was buried on June 29, 1943 in the Eastern Cemetery in Amsterdam in the Allied field of war provided by the Commonwealth War Grave Commission. The names of the four missing men - Connah, Naile (from Australia), Dillon and Reynolds - are featured on the large Runnymede Air Forces Memorial, in Surrey, southern England.