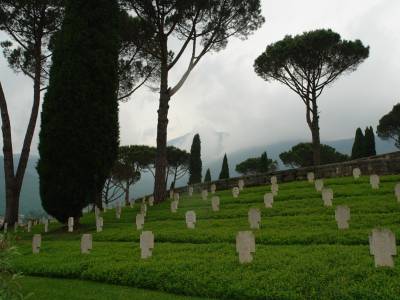 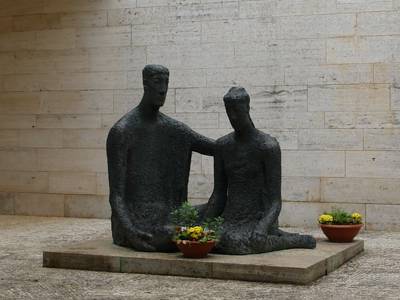 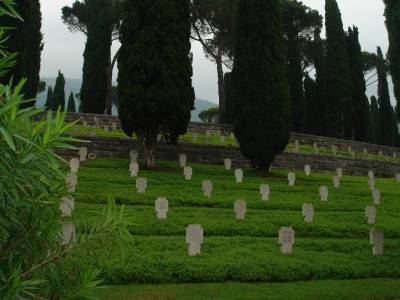 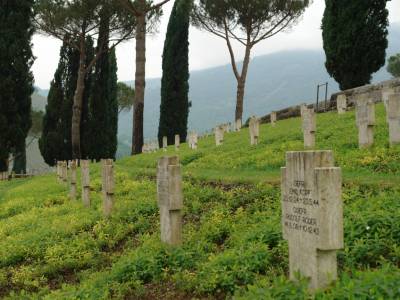 The German Cemetery (Kriegsgräberstätte) Cassino is situated in Caira at 3 kilometers north of the town of Cassino. The graveyard has been created on a hill and comprises the graves of 20.027 that fell in action. Not only those dead that were killed at the battle for Monte Cassino but also the victims that perished during the battles on the Italian countryside south of the line Pescara  Terracina have been buried here. Many were killed in the battle for the bridgehead in the Gulf of Salerno but also the dead that fell in action during the withdrawal at the Adriatic Coast (especially in the area around Ortona) as well as during the fighting in the approaches to Monte Cassino. After reaching an agreement between the German Government and the Italian authorities about this in 1955, the German Graveyard Services have reburied all those at this cemetery in the period 1959  1960.

A wide walkway up the slope, takes the visitor to the cubic entry building. Inside this building, daylight illuminates - through a large square opening - a sculpture symbolizing mourning and comfort. Leaving this building, the visitor enters a large military field of honor which consists of several elliptical terraces. Each terrace has been separated from the next by a sturdy little wall of stacked limestone. Two wide paths circumvent the round hilltop and are connected by narrow steps. The graves carry a cross of travertine in which on both sides, often up to three on each side, the names have been engraved with their dates of birth, rank and date of death. All graves are covered with St. Johns wort. On the cemetery many cypresses have been planted, providing the impression of serene guards watching over the graves.

On the hilltop a bronze cross, 11 meters high and behind it the graves of comrades whose names have been engraved on large stone plaques and who have been buried here between the unknown soldiers. Behind those graves there is a blessed lamp in an iron housing, on a stone pedestal. The lamp has been donated by His Holiness Pope Paul VI to the German cemetery. Similar blessed lamps have been donated to the other cemeteries of other nationalities in the area of Cassino. From this point, the visitor has a beautiful view of the surroundings where, in the valley as well as on the mountain heavy fighting was conducted in World War Two.

It is an impressive place which will remind the visitor of peace!