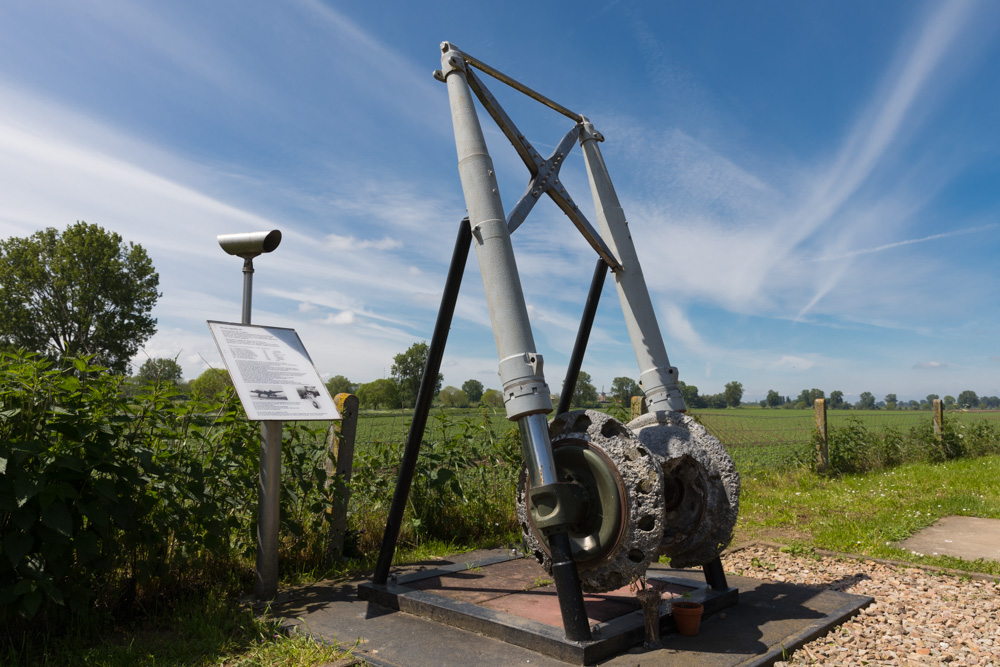 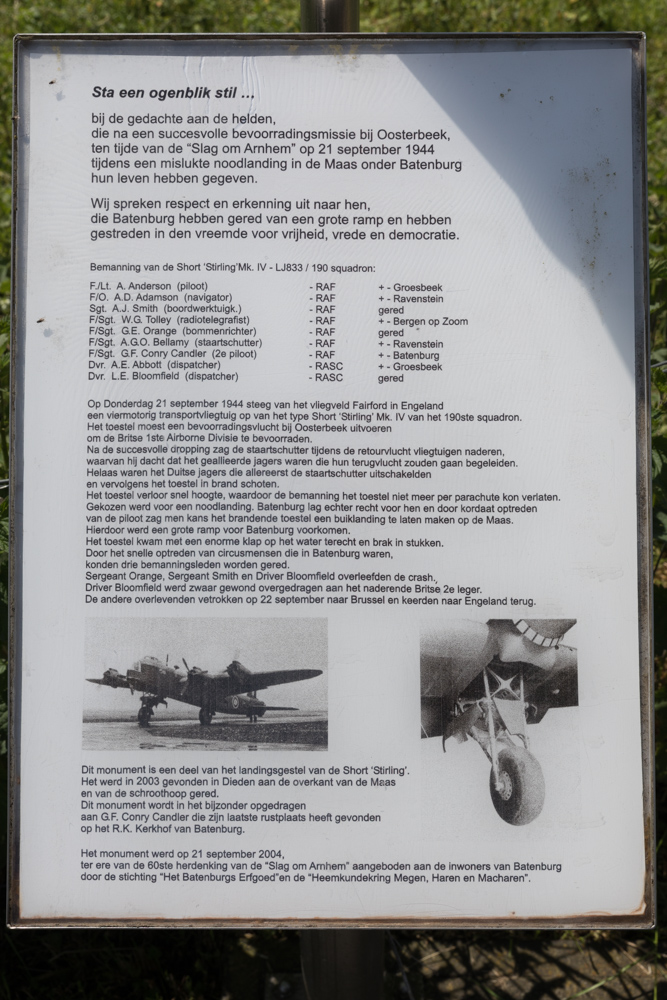 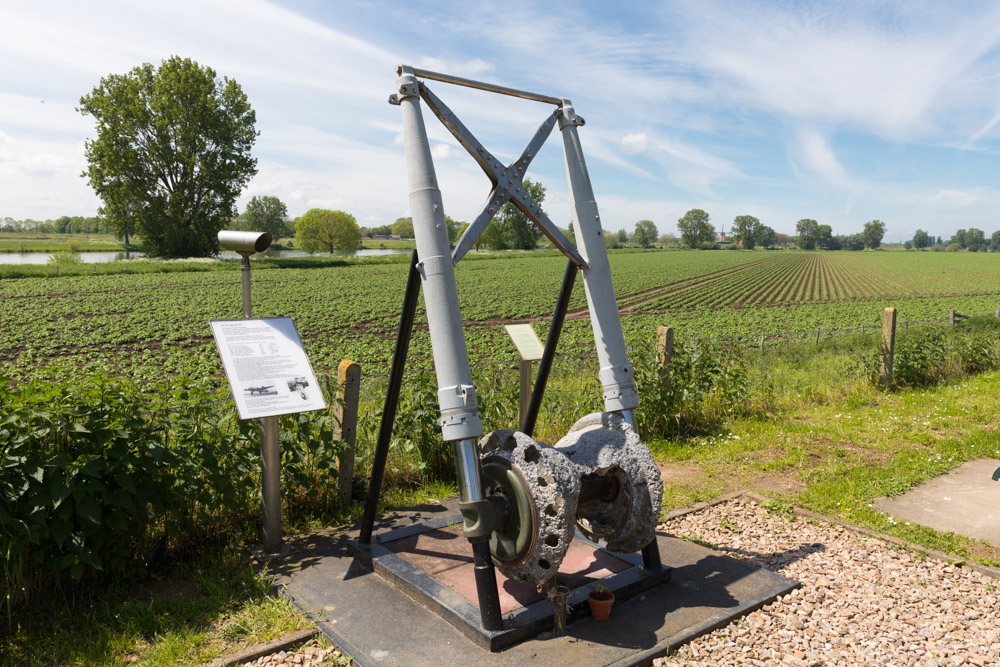 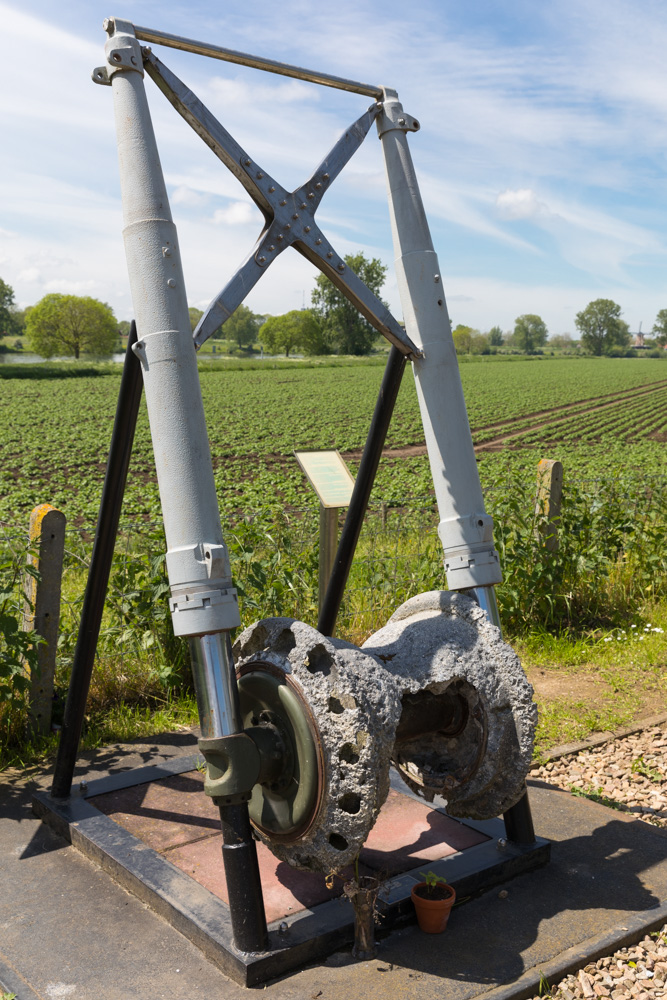 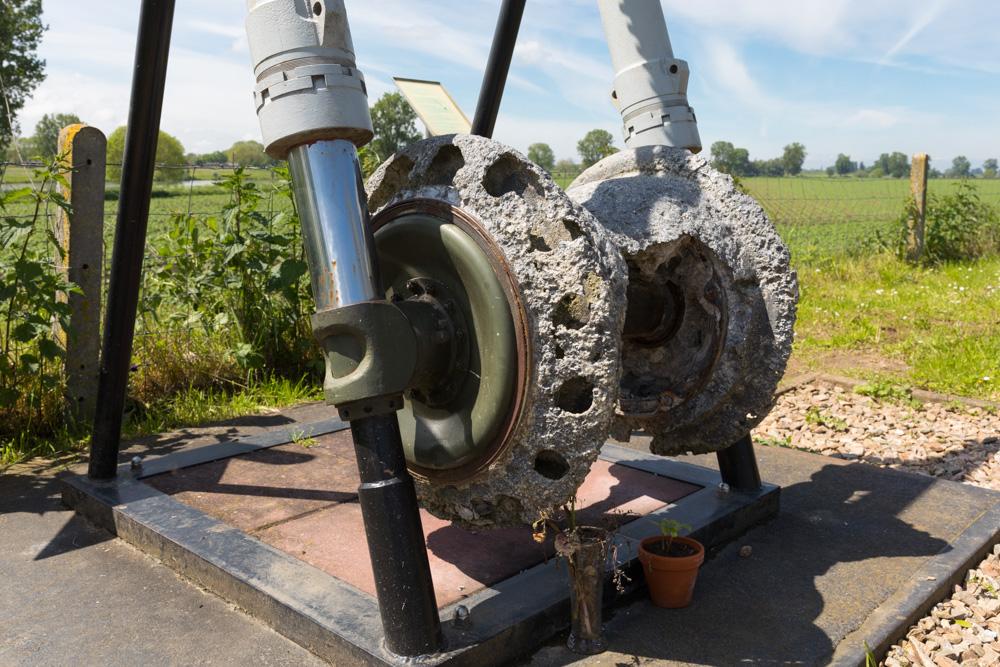 This memorial commemorates the crash of a British Stirling on September 21th 1944.
Dutch text on the sign at the memorial (translated to English):

Stand still for a moment...

at the thought of the heroes,
after a successful supply mission in Oosterbeek,
at the time of the Battle of Arnhem "on September 21, 1944
during an unsuccessful emergency landing in the river Maas under Batenburg
lost their lives.

We speak of respect and recognition to them,
who have rescued Batenburg from a major disaster and have
fought in foreign lands for freedom, peace and democracy.

On Thursday, September 21th 1944 departs from the airport Fairford in England on a four-engine transport aircraft of the type Short "Stirling" Mk. IV of the 190th squadron.
The unit had carry out a supply flight in Oosterbeek to supply the British 1st Airborne Division.
After successfully dropping, the tail gunner saw during the return flight, aircraft approaching, he thought that they were Allies who were going to accompany their return.
Unfortunately, they were German hunters who first disabled the tail gunner and then shot the plane on fire.
The plane lost altitude rapidly, not allowing the crew to leave the plane by parachute.
The crew chose for an emergency landing. However, Batenburg was right before them and due a resolute action by the pilot the burning aircraft made a belly landing on the river Maas.
This has been a major disaster prevention for Batenburg.
The plane colapsed with an enormous blow to the water and broke into pieces.
Due to the rapid actions of circus people in Batenburg, three crew members were rescued.
Sergeant Orange, Sergeant Smith and Driver Bloomfield survived the crash.
Driver Bloomfield was seriously injured and was transferred to the approaching British 2nd army.
The other survivors went to Brussels on September 22nd and returned to England.

This monument is a part of the undercarriage of the Short "Stirling".
It was found in 2003 in Dieden across the river Maas and was saved from the scrap yard.
This monument is specifically assigned to G.F. Conry Candler who has found his final resting place at the R.C. Cemetery in Batenburg.

The monument was reveiled on September 21th 2004, to commemorate the 60th anniversary of the "Battle of Arnhem" offered to the residents of Batenburg by the foundation "Het Batenburgs Erfgoed" and the "Heemkundekring Megen, Haren en Macharen"