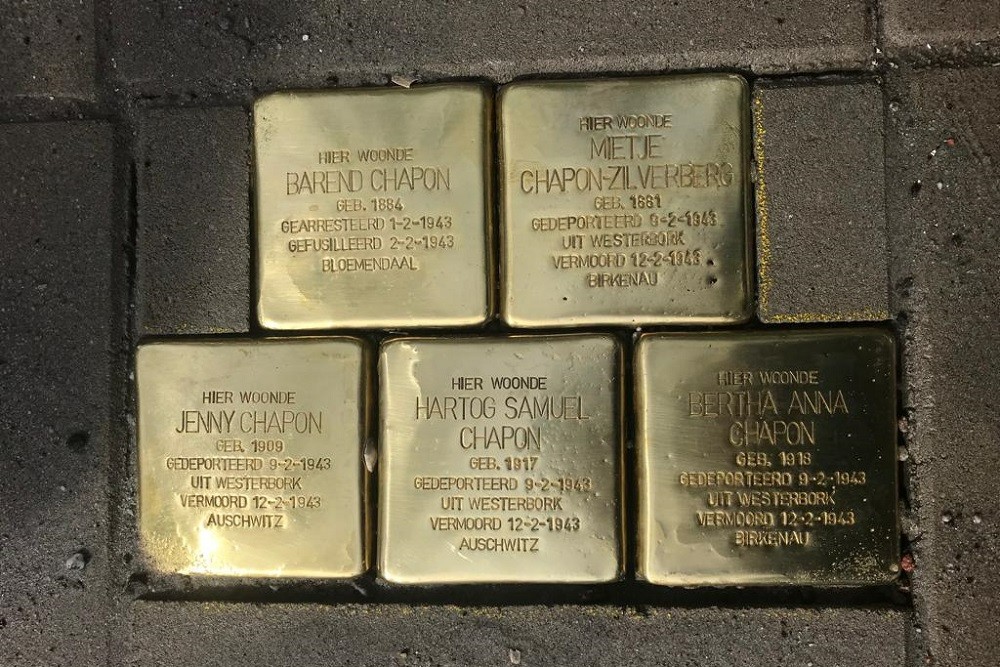 On May 19, 2022, stolper stones were placed here for Barend Chapon, his wife Mietje Chapon-Zilverberg and their children Jenny, Hartog Samuel and Bertha Anna Chapon.
Barend Chapon was an independent broker in securities. He was a councilor for the SDAP in Heemstede. For that reason he was involved in social housing in the Haarlem housing complex Tuinwijk-Zuid. Chapon played an important role in the Jewish community of Haarlem. He was chairman of the Dutch-Israeli Community of Haarlem, chairman of the Jewish Joles Hospital and chairman of the Synagogaal Ressort Noord-Holland. In the spring of 1941 he took a seat on the local Jewish Council.
On January 30, 1943, an Oberwachtmeister of the German medical service was killed. As a reprisal, one hundred hostages in and around Haarlem were captured and transferred to Vught. Ten of them were executed in the dunes of Bloemendaal. Barend Chapon was one of them.
After Barend Chapon's arrest, the police raided the house. Mietje Chapon Zilverberg and Jenny, Hartog Samuel (Hans) Bertha Anna (Zusje) were arrested and taken to the police station. There Mietje Chapon had a heart attack. Despite her bad condition, she was nevertheless taken to the Hollandsche Schouwburg. An attempt by the resistance to free her and her children fell through because Mietje was too ill and the children wanted to stay with her.
Jenny was a telephone operator at the Haarlem post office. On November 21, 1940, she was dismissed by order of the Reichskommissar because Jews were no longer allowed to hold government positions. Hartog Samuel worked as an office clerk. He was a member of HFC from Haarlem, now the Royal HFC. His name is on the club monument. Bertha Anna worked in the office of the Joles Hospital.
Two children from the family survived the war: a son was able to flee through the garden and a daughter was at work.