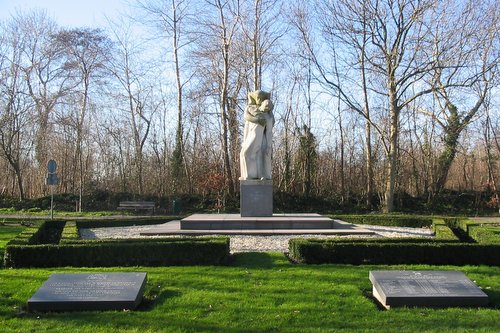 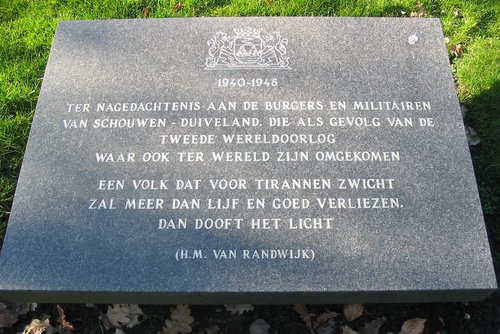 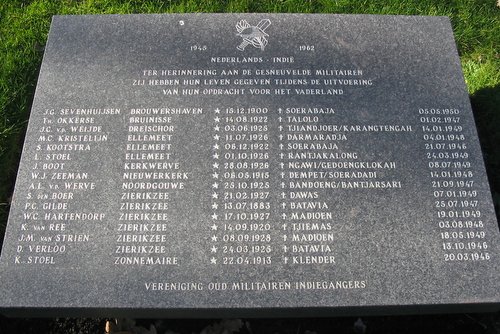 A war memorial in memory of ten members of the resistance and other victims.
The statue depicts a female figure with a Schouwse attire-headdress and who carries one of the victims.
The female figure has been placed on a square pedestal, on one of the sides of this pedestal the date of the execution can be deciphered: 10 December 1944.
On two of the other sides the names of the victims have been engraved:
J.P. Jonker
I.M. Jonker
A.M. Padmos
Joh. Oudkerk
W.M. Boot
M.K. v.d. Beek
I. M. v.d. Bijl
J.A. Verhoeff
M.P.M. v.d. Klooster
C. Lazonder

In front of the statue there are two memorial plaques:
The text on the left hand plaque can be translated as follows:
1940-1945
"In memory of the civilians and soldiers
of Schouwen-Duiveland, who have perished
as a consequence of
the Second World War
wherever in the world".

Followed by a poem of H.M. van Randwijk (which appears on numerous monuments in The Netherlands):

A people that succumbs to tyranny
will loose more than life and limbs.
Then the light is extinguished.

The text on the right hand plaque can be translated as follows:
1945-1962
Dutch East Indies
In memory of the soldiers that died in the war
they have given their lives during the carrying out of their orders
for their fatherland.

There below their names and further personalia have been engraved

The charge against the "ten of Renesse" had been made by summary justice: because of supporting the enemy and the collaboration with a group of terrorists, condemned to death by hanging. This drumhead court-martial was organized by Hauptmann Schütz who had taken over the civilian ruling on Schouwen-Duiveland and Oberstleutnant Von Alvensleben, the island commander of Goeree Overflakee.
The execution was carried out at the entrance of Slot Moermond (Castle Moermond) at December 10th, 1944.