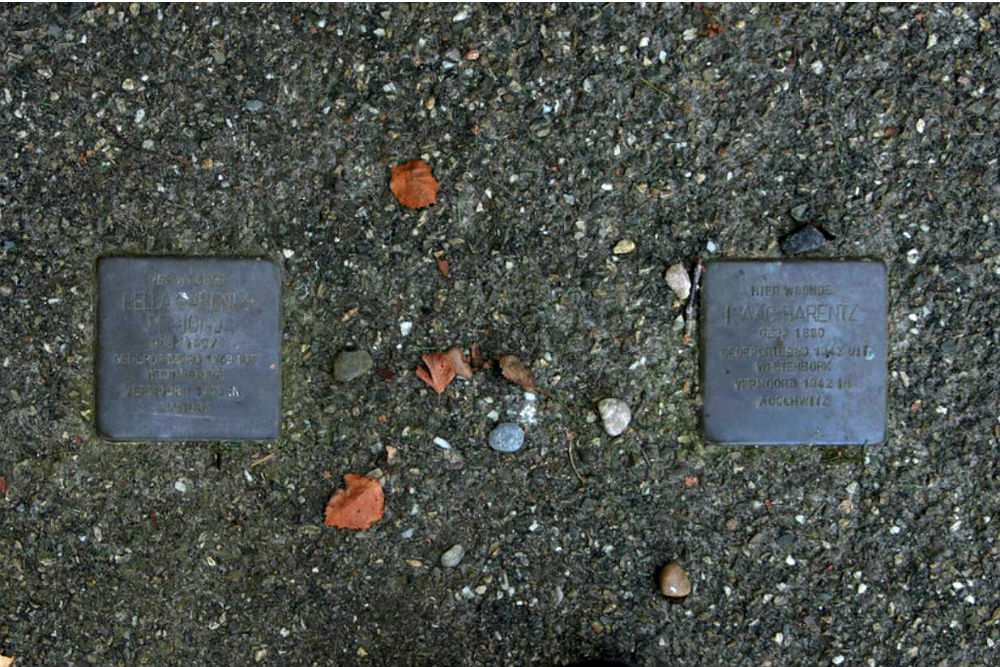 Bella de Jong married Isaäc Barentz in July 1925. He was a travelling salesman and merchant who liked to paint in his free time. He had a pleasant face and a good sense of humor. In 1937, they moved into half of a new house at this address. They were well off. Then the anti-Jewish regulations took their resources. In early July 1942 he was asked to be examined and then to register for a labor camp, and on the 10th he and 9 other men and boys from Haren were sent to Westerbork. Then on 14 July he and over 1,100 other Jews were on the first deportation train from Westerbork to Auschwitz. Isaäc Barentz was murdered in Auschwitz on 15 August 1942. He was 51.

Haren Jews not taken in July 1942 were swept up on 28 November 1942, but Bella Bella Barentz-de Jong remained in Haren  perhaps she was ill. But the following March she was taken to Westerbork, along with the blind girl, Clara van Coevorden, from the institute in Haren. On April 13, they were deported from Westerbork, arriving in Sobibor extermination camp on the 16th. They were both taken to the gas chambers and murdered. Bella was 46. Clara was 12.

A stolperstein for Clara van Coevorden is at Rijksstraatweg 61 in Haren.

The German artist Gunter Demnig started placing the first Stolpersteine in 1997 in the Berlin's Kreuzberg district. Meanwhile there are Stolpersteine in many countries. It reminds the Holocaust in World War II. A Stolperstein is a concrete stone of 10 x 10cm, with a brass plate on top, in which the name, date of birth and decease and also place of decease is punched into. The Stolperstein gets a place in the pavement in front of the former house of the victim. By doing this, Gunter Demnig gives a private memorial to each victim. His motto is: 'A HUMAN BEING IS FORGOTTEN ONLY WHEN HIS OR HER NAME IS FORGOTTEN'.