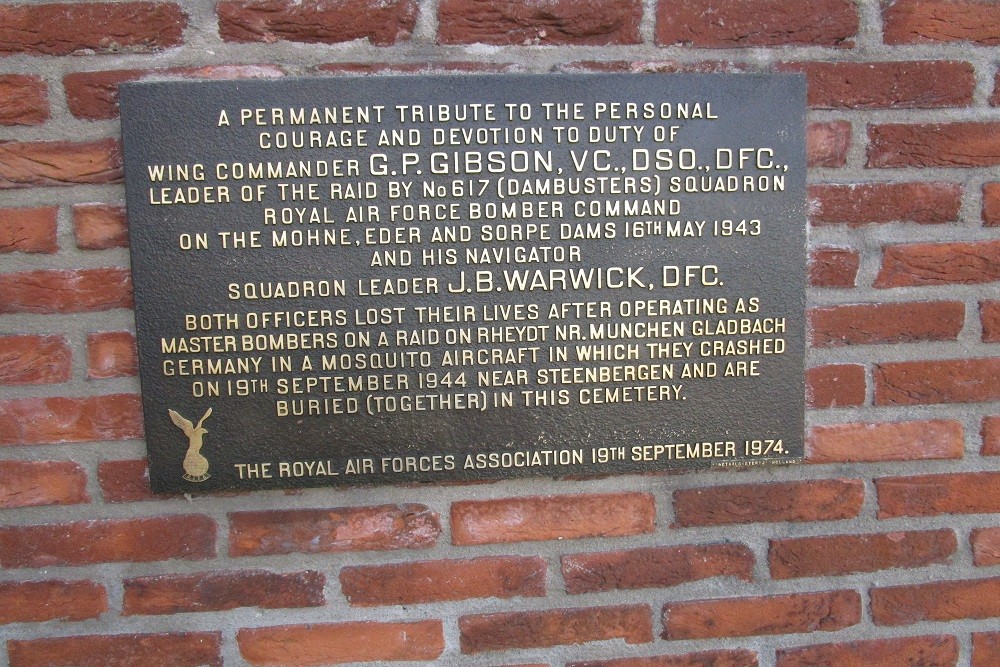 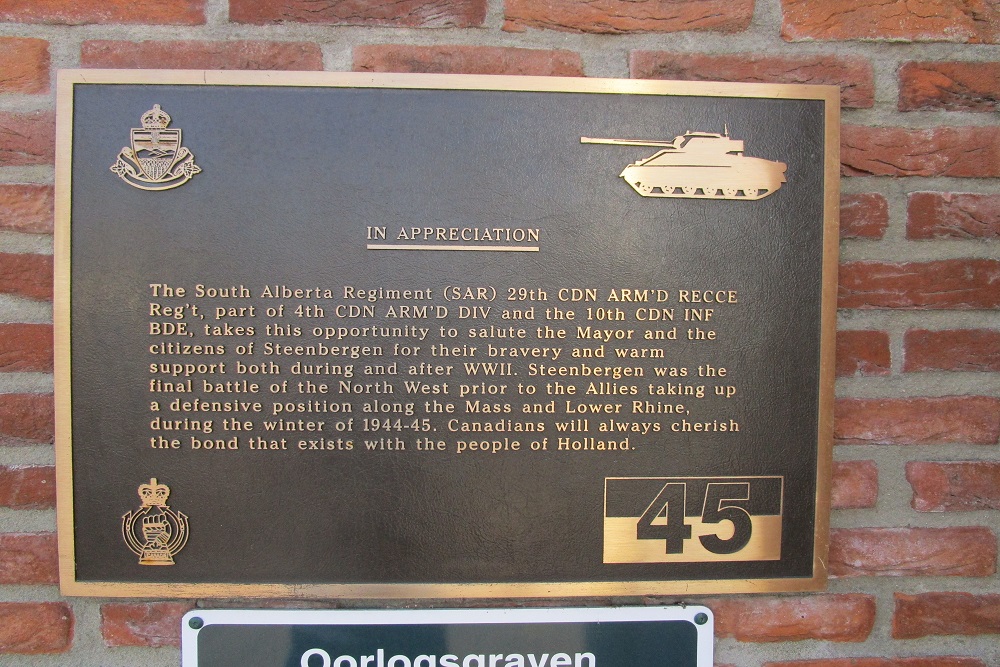 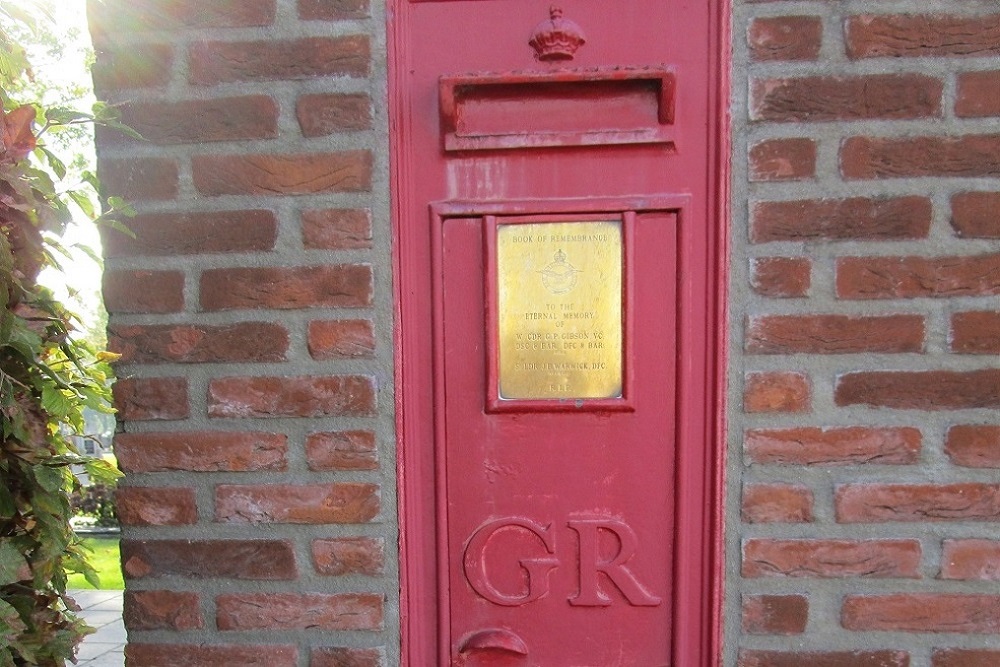 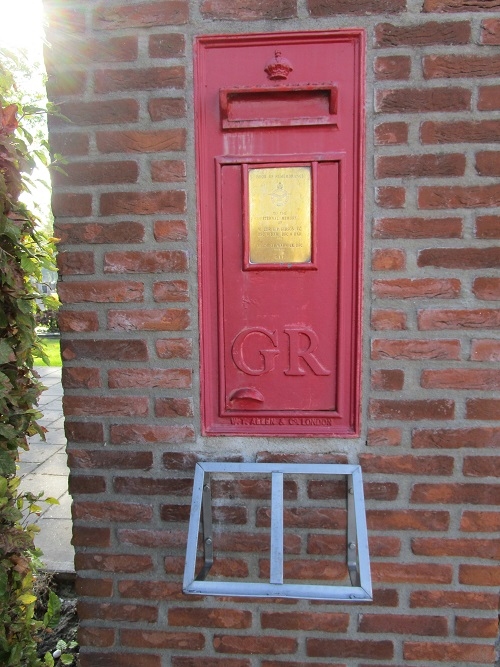 On the wall of the General Cemetery at Steenbergen is a Plaque in honor of Wing Commander G.P. Gibson and Squadron Leader J. B. Warwick.

A PERMANENT TRIBUTE TO THE PERSONEL
COURAGE AND DEVOTION TO DUTY OF
WING COMMANDER G.P. GIBSON , VC., DSO., DFC.,
LEADER OF THE RAID BY No 617 (DAMBUSTERS) SQUADRON
ON THE MOHNE, EDER AND SORPE DAMS 16th MAY 1943
AND HIS NAVIGATOR
SQUANDRON LEADER J.B. WARWICK, DFC.

BOTH OFFICERS LOST THEIR LIVES AFTER OPERATING AS
MASTERBOMBERS ON A RAID ON RHEYDT NR. MÖNCHEN GLADBACH
GERMANY IN A MOSQUITO AIRCRAFT IN WHICH THEY CRASHED
ON 19th SEPTEMBER 1944 NEAR STEENBERGEN AND ARE
BURIED (TOGETHER) IN THIS CEMETERY.

That same wall also contains a box with a book of remembrance in memory of Guy Gibson & James Warwick, both of which are buried in this cemetery.
Text on the box:

TO THE
ETERNAL MEMORY
OF

On the outside wall of the General Cemetery in Steenbergen a plaque has been placed as a thank you from the Canadians to the people of Steenbergen for their hospitality during the Second World War.

The South Alberta Regiment (SAR) 29th CDN ARM'D RECCE
Reg't, part of the 4th CDN ARM'D DIV and the 10th CDN INF
BDE, takes this opportunity to salute the Mayor and the
citizens of Steenbergen for their bravery and warm
support both during and after WWII. Steenbergen was the
final battle of the North West prior to the Allies taking up
a defensive position along the Mass and Lower Rhine,
during the winter of 1944-45. Canadians will always cherish
the bond that exists with the people of Holland. 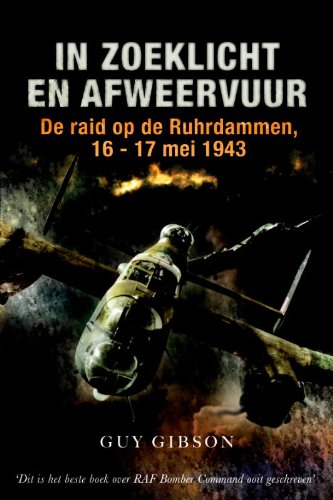 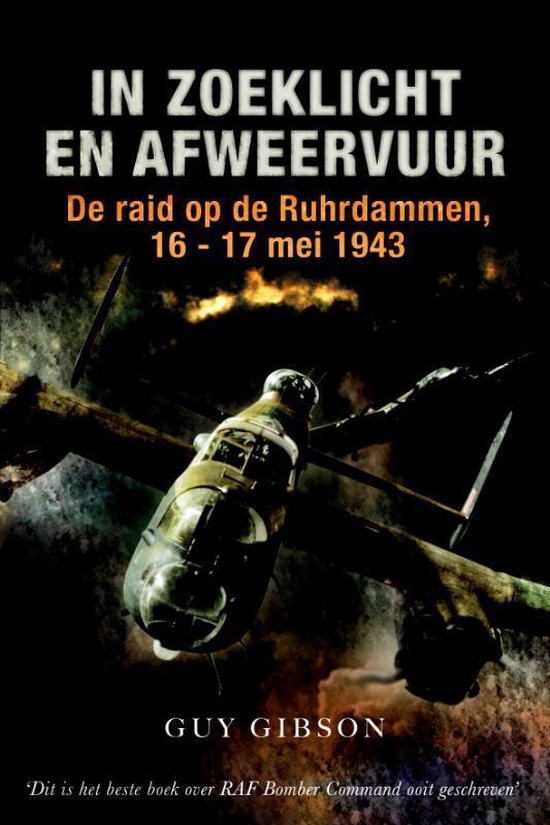