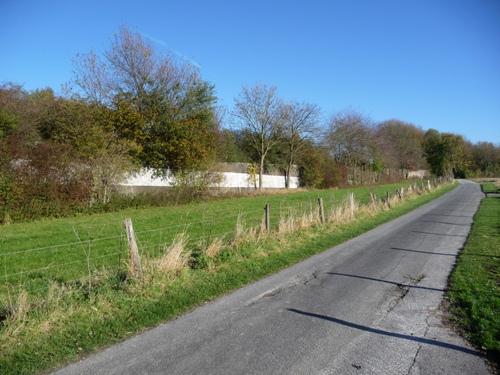 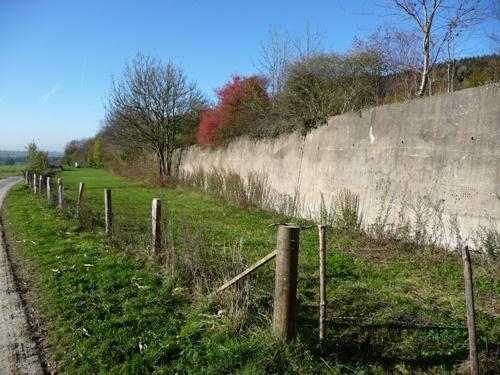 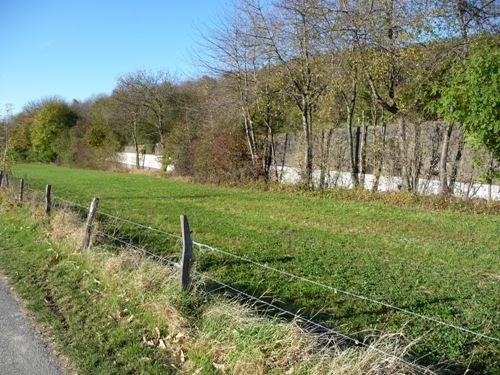 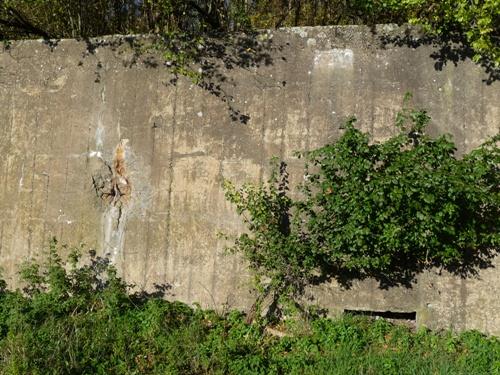 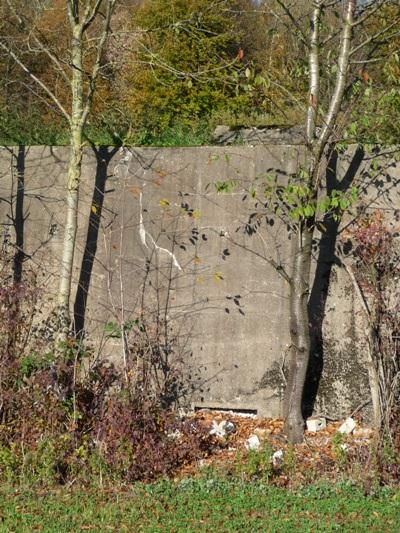 This anti-tank wall, whiach was a part of the Westwall, is still in a very good condition. The wall is about 450 meters long and contains three embrasures. Also, there is some damage of grenades.

Further background
The Schneeberg, a hill on German territory, is situated in the vicinity of Vaals and Aachen. The white and yellow limestone soil around the mountain immediately catches the eye. The white and yellow limestones date from the Late Cretaceous period, a geological era with an age of approximately 73 to 66 million years. The Schneeberg has a height of 257 meters above sea level. The Selzerbeek flows at the foot of the hill. Anti-tank obstacles were constructed on the plateau on the Schneeberg during the Second World War. From the Schneeberg German troops were able to keep a close eye on the area. Between 1938 and 1939 a fortified defensive wall was built, part of the Westwall, on the Schneeberg. This wall runs parallel to the '' Schneebergweg ''. The Germans used concrete and barbed wire in the construction. Near the Schneeberg the wall is three hundred and fifty meters long and has a height of approximately 3.70 meters. Several viewing windows for machine guns were installed in the wall. Today, openings for those machine guns can still be seen. There is also a bunker near the wall (Bunker type 108b). A small information board is attached to the footpath in the verge. Several concrete obstacles can be seen to the right of the wall. German units stationed in the vicinity of the Westwall near Schneeberg in 1944 included the 116th Armored Division, the Fallschirm-Jagdkommando and the Panzer-Aufklärungs-Battalion 116.

The aforementioned Westwall (or Siegfried Line), of which the wall is part, was a German defense line that was built just before and during the Second World War. The aforementioned line runs from Cleves, on the Dutch border, to the Swiss border. In total, the West Wall has a length of six hundred and thirty kilometers. Bunkers, concrete tank barriers, military gun nests, barbed wire barriers and minefields were part of the line. The Westwall was built between 1936 and 1945. Engineer Fritz Todt was in charge. The German line was a reaction to the French Maginot Line, a gigantic fortress system. At the end of the war, the Siegfried Line was largely cleared. Today, objects such as anti-tank obstacles and bunkers can still be seen in some places.