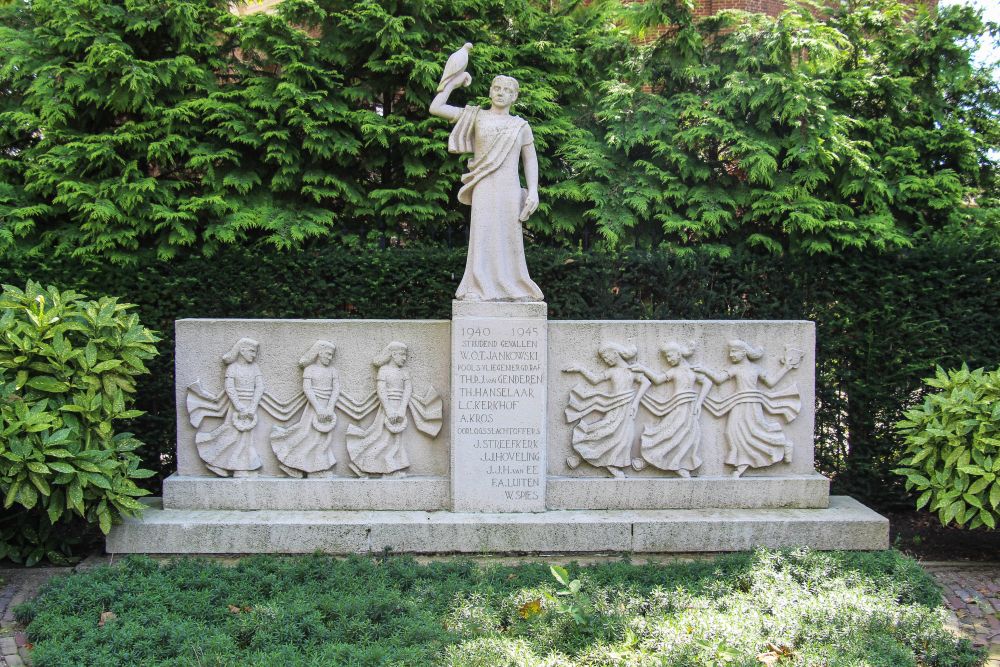 Monument for the war victims of Jutphaas.

The focus is on a female figure on a pedestal. The woman has a pigeon on her right arm. The pigeon is a symbol of peace. She is holding a book in her right hand, a symbol of justice and justice.

Theo Hanselaar, Aart Kros, Jan Streefkerk, Frans Luiten and Willem Spies died on 7 May 1945. Luiten is buried in nearby [towid] 19243, Nicolaaskerkhof [/ towid], the others in the municipal cemetery [towid] 19242 , Kerkveld [/ towid]. Johan van Ee is also buried there.

Tadeusz Jankowski crashed near Plettenburg on September 20, 1944. Jopie Hoveling was only 8 years old when he was killed by Jankowski's crashing plane. Jopie was buried in the Nicolaaskerkhof. The Polish pilot was initially also buried there, but he was reburied on the Polish plot in Breda.

Bertus Kerkhof was a soldier and was wounded on 8 May 1940 at the IJssellinie. He died three days later in Zutphen. Initially he was buried in the Nicolaaskerkhof, but he was later reburied in the Loenen Field of Honor.

Thijmen van Genderen worked as a sailor on the merchant ship s.s. Sembilan, which was torpedoed on April 17, 1943 on the Indian Ocean near Durban in South Africa. 85 people died.