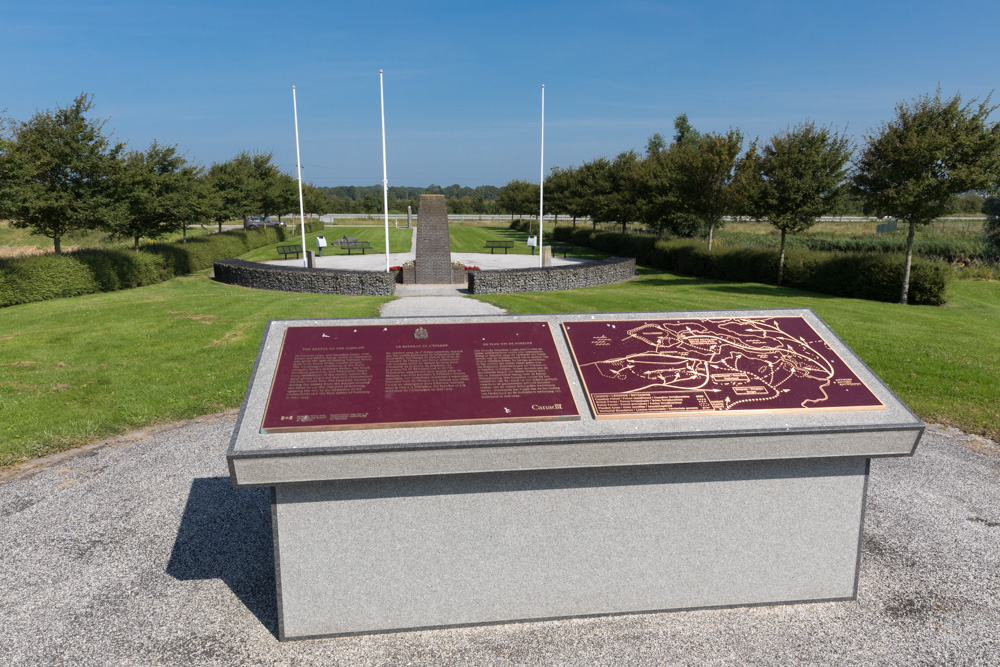 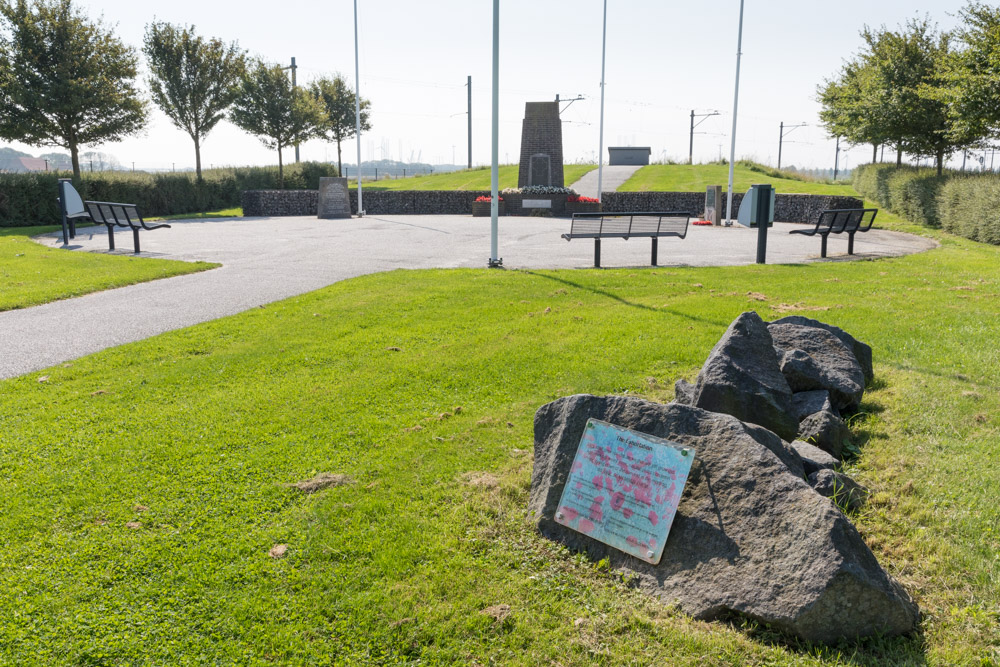 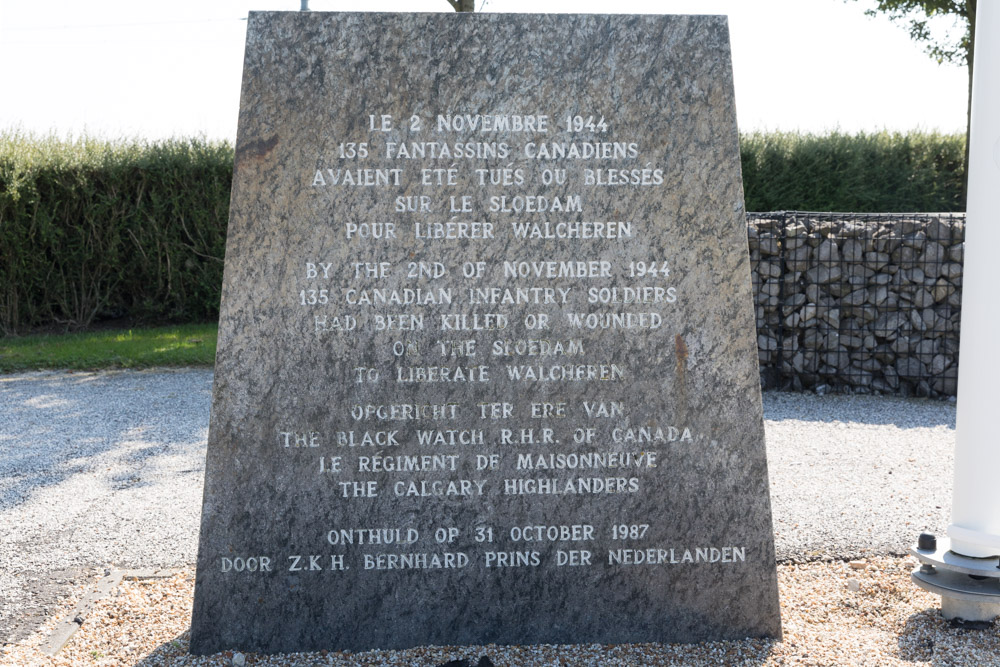 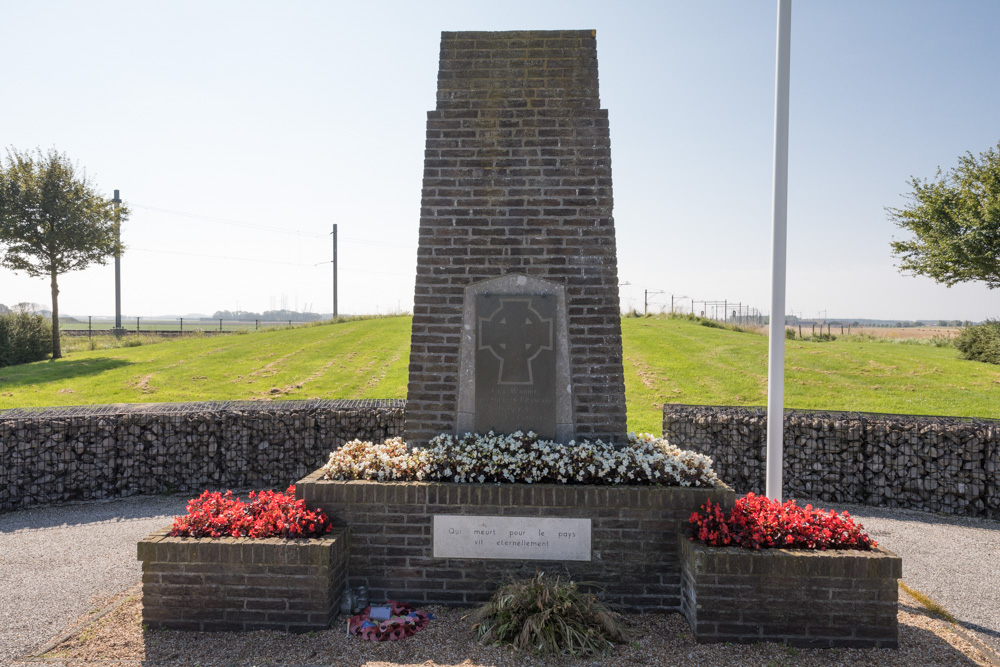 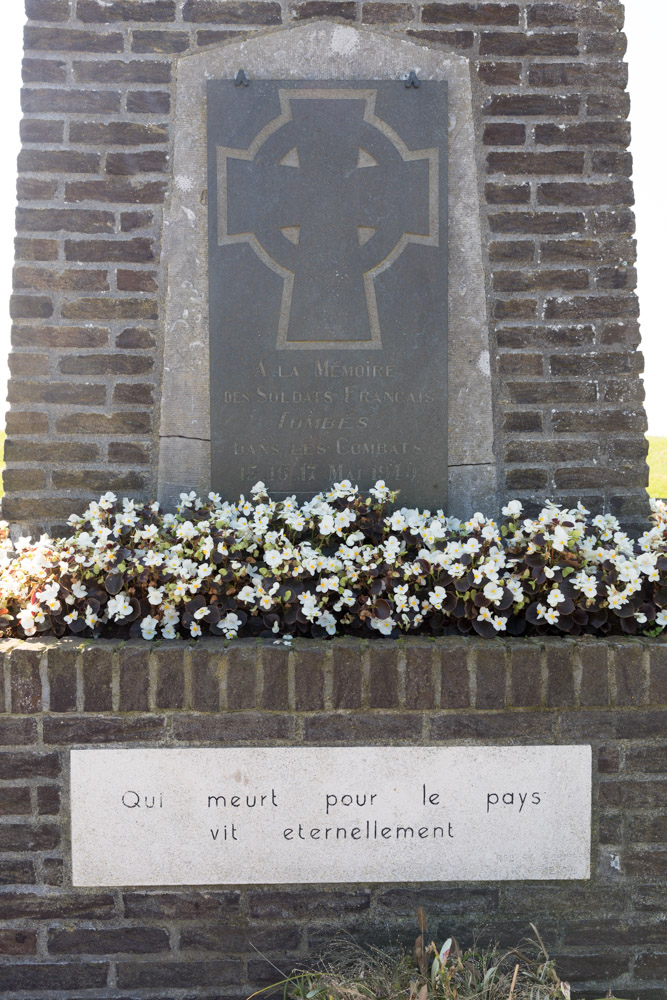 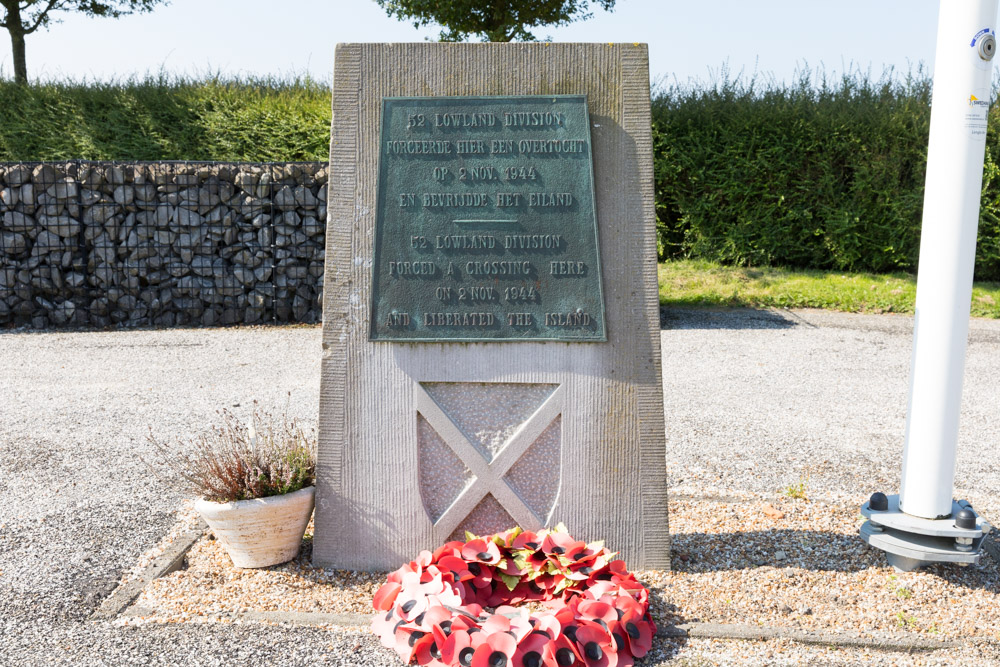 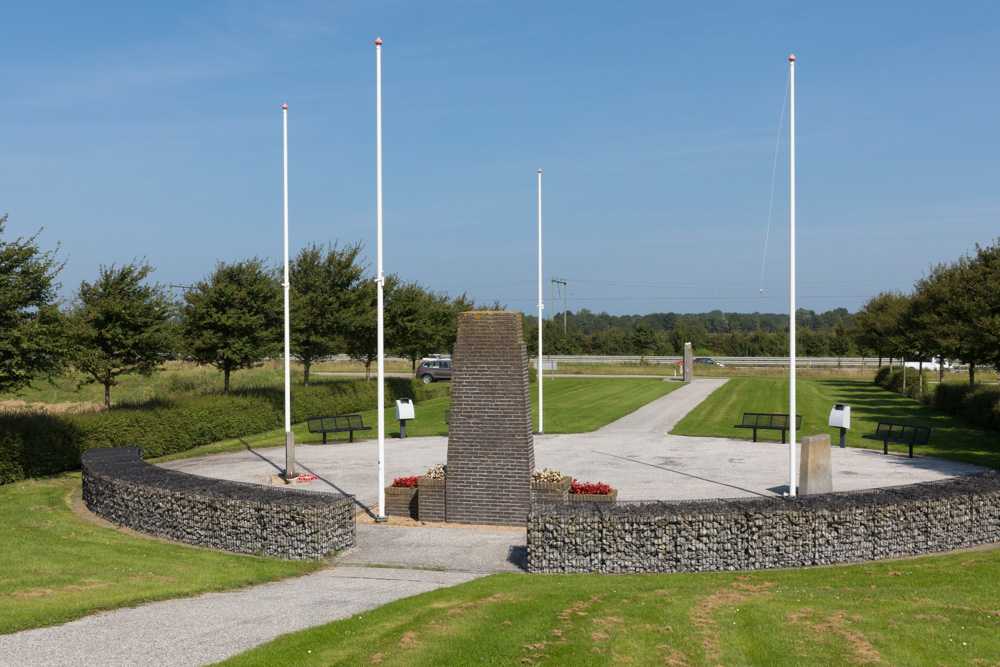 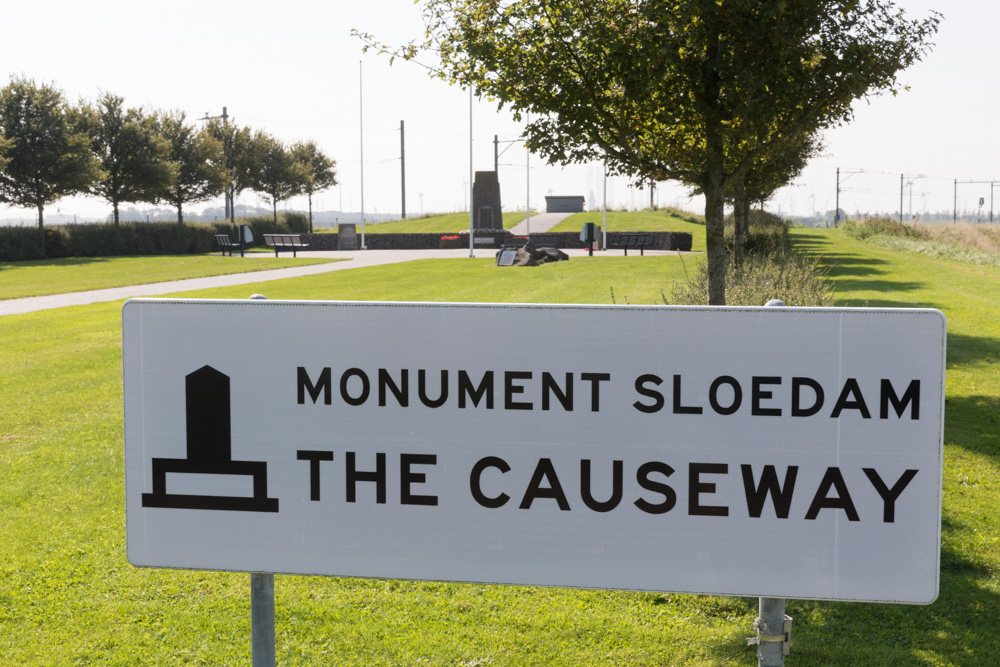 Monument Sloedam The Causeway is positioned on the right hand side of the road which leads parallel to the freeway from Vlissingen into the direction of Arnemuiden towards Leeuwendorp and Heinkeszand. Coming from Heinkeszand these monuments are on the left hand side of the road and at the exit towards the monuments you will see the sign "Postweg".

During the liberation of the Dutch province Zeeland, there were heavy fightings on the Sloedam (the dike of the Sloe) which took many lives.

On monument number four the following inscription can be read:
The battle for the Sloedam and Operation Mallard of 31 October till 5 November 1944.

In the Second World War the Sloedam was the only connection of the isle of Walcheren with the mainland peninsula Zuid Beveland (at that time a dike in the Sloe of about 1.000 yards long and only 45 yards wide).
Because of the presence of the French Forces in 1940 battle continued in Zeeland even after the capitulation of the Dutch on 14 may 1940. On the 17th of May, 1940, the 9th Company of the SS Regiment Deutschland of the SS-Verfugungs Division advancing from the east started the attack from Zuid Beveland.
The French amongst others of the 224ème Regiment dInfanterie of the 68ème Division dInfanterie resisted with force and defeated many attacks. At about 17:00 the French were forced to withdraw. That same evening the occupation of Walcheren and Zuid Beveland followed. The French counted nineteen dead, the Germans fifteen.

At the end of the war the Sloedam again was the theater of heavy fighting.
From the end of October in 1944 the allied forces had to face the German occupying forces of the Isle of Walcheren. (At the entrance of the river Scheldt, leading to the port of Antwerp). That battle started with an attack on 31 October, 1944, overland on the dike of the Sloedam by the Canadian forces of the 2nd Canadian Infantry Division the Black Watch of Canada (HRH), the Calgary Highlanders and Le Régiment de Maisonneuve of the 5th Canadian Infantry Brigade who carried out four frontal attacks successively.
The first captured bridgehead on Walcheren could only be held for a few hours. They had to withdraw. On November 2nd , the attack was taken over by the 1st Bn of the Glasgow Highlanders of the 52nd Lowland Infantry Division, Operation Magnetise.
In the afternoon of November 3rd, 1944, the Sloedam could be captured definitively. During the battle for the Sloedam which lasted from the 31st of October up till and including the 5th of November, 1944, 45 Canadians and nineteen British troops were killed. An important contribution to the capturing of the Sloedam was the flanking maneuver called Operation Mallard.
From the small harbor South Kraayert near Nieuwdorp in the night of 2 to 3 November an amphibious landing was carried out across the Sloe onto Walcheren by the 6th Bn The Cameronians (SR) in order to crush the German defenses at the Sloedam by a circumventing movement. The operation succeeded. Eastern Walcheren was liberated on 5th November, 1944, also because of this movement. In Operation Mallard nineteen British soldiers lost their lives. During the battle for the Sloedam hard fighting took place.

The three monuments that have been placed here are to honor the brave allied troops that here as well as around the Sloedam and the Sloe offered their lives for our freedom.

Text on the 52nd Lowland Division monument:
52 Lowland division
Forced A Crossing Here
On 2 Nov. 1944
And Liberated the Island

The French monument recalls the French soldiers who were killed in May 1940, during the battle of Zeeland at the Sloedam Causeway.
Before and during World War II the Causeway was a dike with a length of a kilometer and only 45 meters wide. At the dike were the Post Road and the railway line from Flushing to Bergen op Zoom and so on in the country. On either side was the Sloe. A muddy area. The Causeway was the only link of Walcheren to South Beveland and further inland. After the capitulation of the Netherlands on May 14, 1940, the battle in Zeeland continued for a few days thanks to the aid of the French troops who helped. On May 11, French infantry with artillery landed in Flushing and in both west and east Zeeuws-Vlaanderen a French infantry division led by Maj. Gen. Deslaurens and Beau Frere appeared. The objective of the French was the security of the Scheldt estuary and the creation of connections with the Allied front in Belgium.
On May 17 the French withdrew from the Causeway fighting back to the Westerschelde in Flushing to get to Belgium through France and continue the fights.

The Foundation for Support Liberators has campaigned for a plaque to place at the stones in the foreground, visible at the photo of the Memorial. The plaque has an English text along with a French and Dutch translation. The plaque is intended as a tribute to all the troops who have celebrated their comrades here since the battle of the Causeway in 1940, the occupation and the liberation of our country, during all those years .

The English text of The Exhortation.
They shall grow not old, as we that are left grow old.
Age shall not weary them, not the years condemn.
At the going down of the sun and in the morning,
WE WILL REMEMBER THEM.

On May 6th 2010 a new memorial with two plaques has been unveiled at the Sloedam by the "Historic Sites and Monuments Board of Canada". Herewith the total of monuments at the Sloedam has now been completed. The new monument has been placed on the view point over the Sloegebied (Sloe area) which can be seen on the overview picture behind the French monument.
The text on the left hand plaque has been written in three languages: English French and Dutch.

The Dutch part can be translated as follows:
The Battle for the River Scheldt.
In October 1944 the Canadian 2nd Corps received the orders, with British and Polish forces under its command, to clear both banks of the estuary of German troops. The heavy fighting on the flooded grounds at the Breskens Pocket, the peninsula of Zuid-beveland and the Isle of Walcheren reminded people of the battles for a few yards of muddy terrain during the First World War. Thanks to the efforts of the Canadian Forces the enemy was driven away from the banks of the river Scheldt and consequently the allied forces gained access to the port of Antwerp. Herewith the road to the liberation of The Netherlands and the siege over Germany in May 1945 was opened.
Historic Sites and
Monuments Board
of Canada
On the right hand side plaque you will find a legend in the three aforementioned languages explaining how the battle developed and which units have been where on Zuid Beveland and Walcheren en where these units originated from. 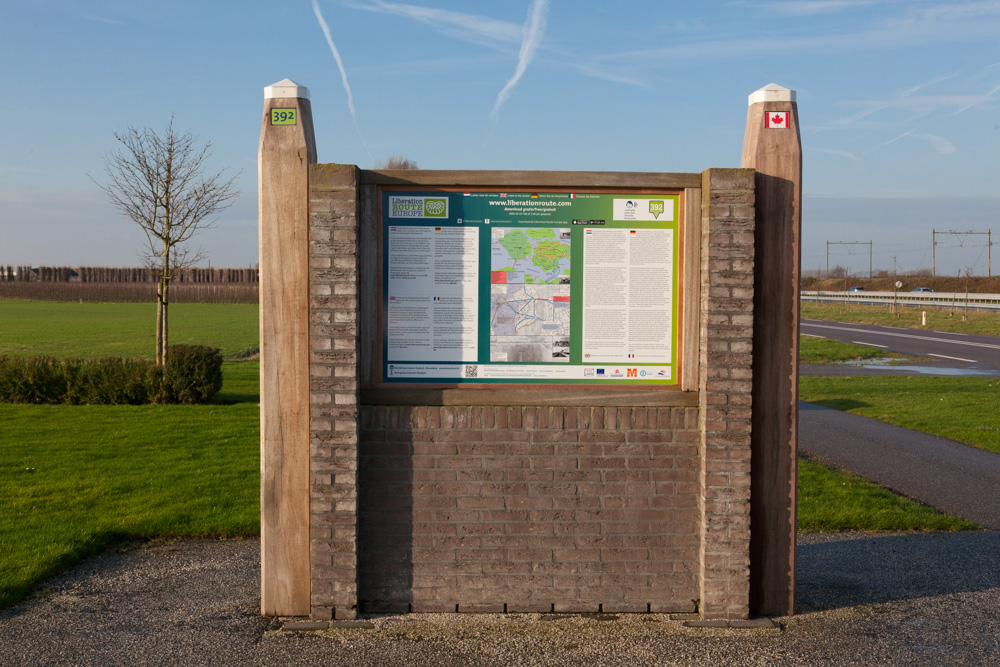