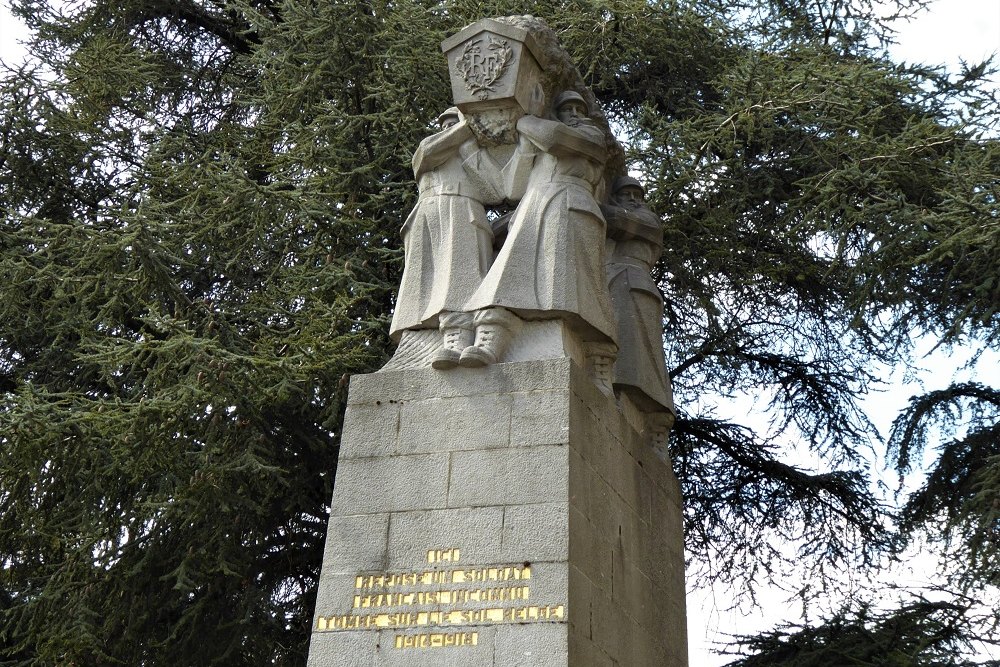 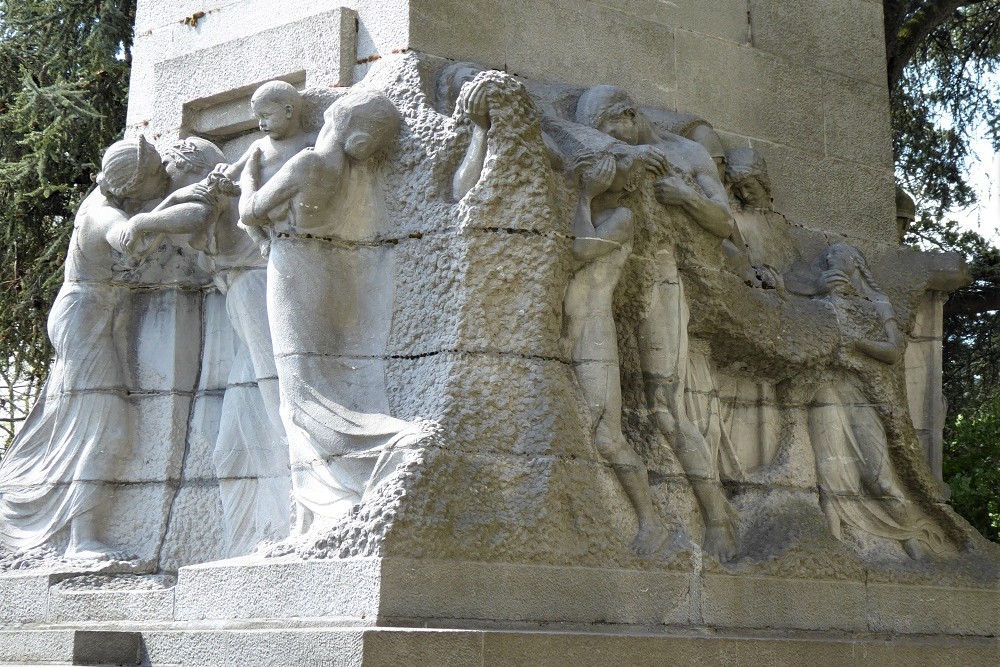 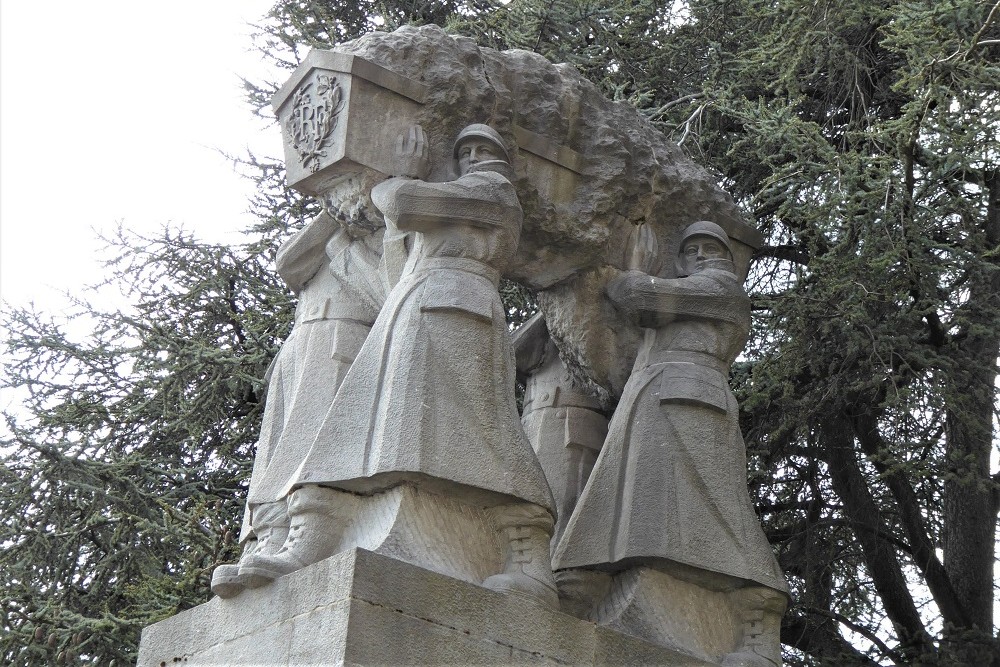 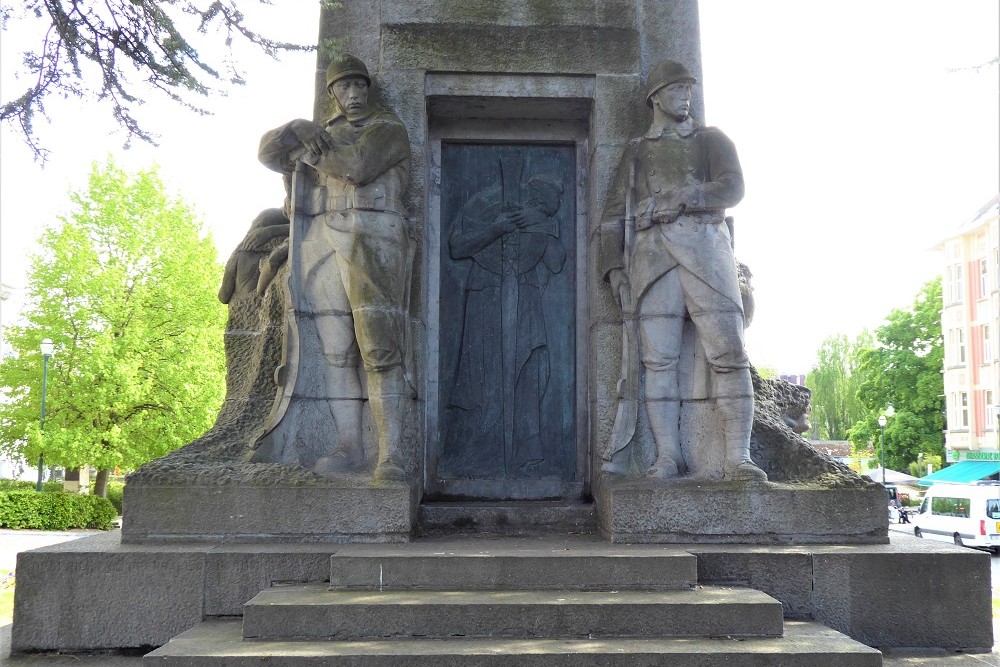 Monument designed in 1925 by sculptor Desmaré and architect Malfait, executed by sculptor Ernest Salu II and watering can Verbeyst and inaugurated on 17.07.1927.
It stands on a small hill which is accessed by stairs.
The monument is roughly hewn from massive bluestone blocks and has the shape of a high trapezoidal pylon. The pylon is crowned with four Belgian soldiers dressed in heavy army coats carrying a laurel-wreathed coffin bearing the monogram "RF". Highly elevated sculptures have been placed on either side of the broad base.
A procession of mourning men, women and children, facing the front, lay wreaths of flowers.
Still in the front, two female figures, representing Belgium and France, exchange the sister's kiss. Front and back, evocations of tomb gates. To the rear, left and right, two French soldiers stand guard at the bronze gate that closes off the crypt. On the bronze plate is a statue of the mourning Marianne.
Later, a bronze reservoir was constructed in front of the monument, with the same monogram and with swords pointing towards the memorial flame. On the left is also a small memorial plaque:
"Falling to the French Soldiers in North Africa  1952-1982"

On the pylon is the inscription (in French at the front, in Dutch at the back):
"Here rests an unknown French soldier who fell on Belgian soil
1914  1918"
During the construction of a military training area in Lombardsijde, a trench was found in 1923 with the remains of 42 French soldiers. The repatriation commission managed to identify 34 victims. Their corpses were placed at the disposal of the families or buried in the French honorary court in Ypres.
On July 15, 1927, the remains of the eight unknown French soldiers were transferred from the military cemetery of Ypres to Bruges. A blind former soldier pointed out the coffin intended for the mausoleum that had been erected in Laeken in the station of Bruges.
This unknown French soldier lies in the crypt below the monument. He symbolizes all those who have fallen to regain our own freedom.