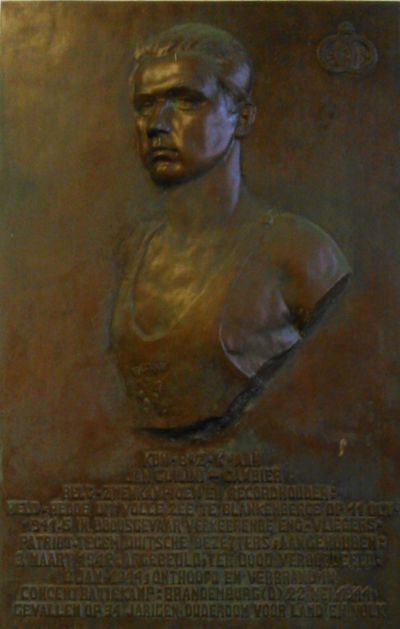 Jan Guilini was one of the best Belgian swimmers in the 1930s and during the Second World War he was a resistance fighter.

As a swimmer, he captured some Belgian swimming records. His talent would play a role during the rescue of 5 RAF pilots in the autumn of 1941. He saved the lives of 5 pilots who crashed in the Northsea. The BBC reported his courageous act and the Belgian government in exile honoured him with the National Trophy of Sports.

After saving the pilots he joined the 'Légion Belge' and the 'National Party' who were active as resistance movements. During his time as resistance fighter, he transferred information about the German forces in Bruges and the Coast to London. His actions didn't last for long: the Germans captured him in February 1942 and deported him to East-Europe.

On 22. May 1944, after more than 2 years as prisoner, he had been executed and burned in Brandenburg (Sachsenhausen, Germany). He died at the age of 34.

The plaque can be found near the cash register of the swimming pool. At the cemetery of Bruges a monument can be found in the plot for the Political Prisoners and the Deported from Bruges.