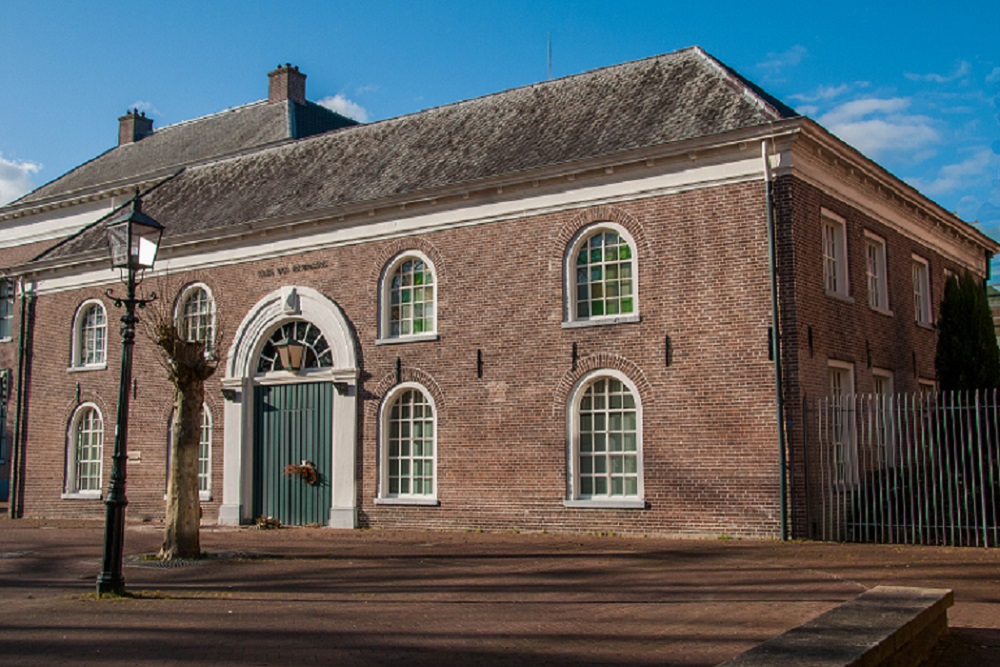 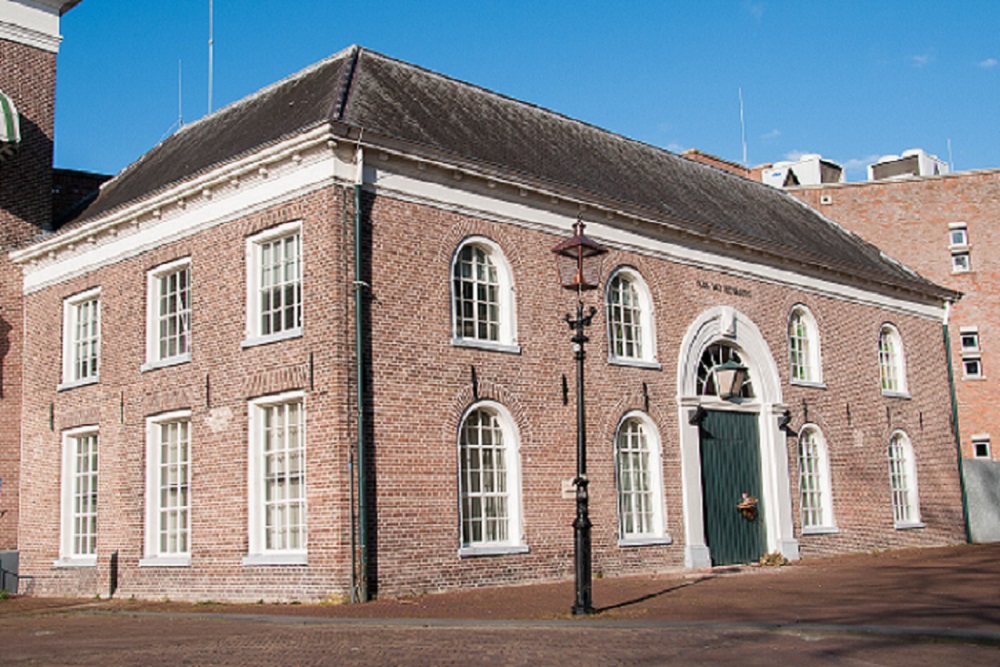 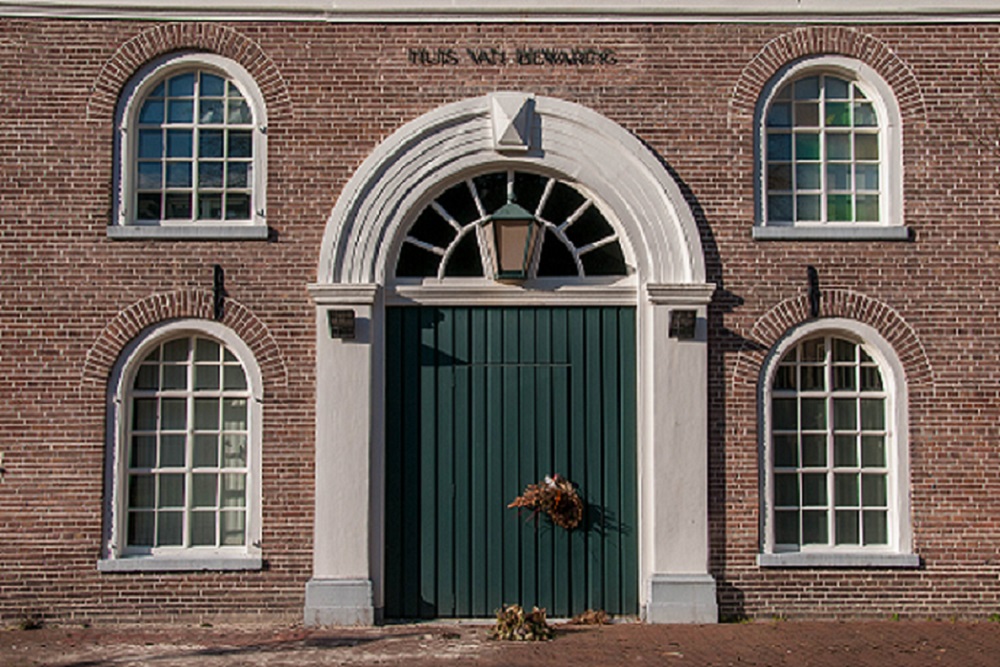 This building, at the Brink in Assen, was built in 1840. It lies next to the Palace of Justice, the local courthouse. This building used to be a county jail, where people were held in custody. A lot of people that were involved in the Dutch resistance during the Second World War, were held captive here by the Germans.

The Knokploeg Noord Drenthe, or: Assault Group of Northern Drenthe (literally translated as "brawl crew" or "goon squad") conducted a raid on this county jail on December 11th 1944. Their goal was to set free a group of resistance members, who, as was believed, were to be executed by the Germans. The intelligence of the Assault Group turned out to be right: the imprisoned resistance members were scheduled to be shot on December 12th 1944: the raid to free them was organized in the nick of time.

Prior to the raid The Knokploeg received inside information from a guard called Henk Geerts. He informed them that the Sicherheitsdienst (SD) members on night shift would leave the county jail at 7 a.m, while the day shift members of the SD would not arrive until 07:50 a.m. During those 50 minutes only Dutch employees would occupy the building, which seemed the most opportune time to conduct the raid.

Resistance member Marie Zandvliet-Bulthuis (her pseudonym: "Greet") checked whether the information from guard Geerts was valid and accurate: she went out a couple of times early in the morning to check inconspicuously whether the change of night- to day shift of the Sicherheitsdienst happened at the times he stated it did.

On the morning of the raid "Greet" notices that the German SD has left the premises in accordance with the intel and her observations. She fetches the six men from her parents house, and they hide in the bushes on the right side of the entrance by the county jail.
The men see at 7:25 a.m how the county jail door is opened by a Dutch guard. He is apparently there to relieve night shift of their duty. Freek and Jelle instantly overwhelm the guard and five men of The Knokploeg invade the building. The sixth man, Henk, stays behind at the entrance with two Colt .45 pistols and two hand grenades, to use in case the German SD day shift arrives earlier than expected.

Inside the county jail the five men check their list of captives and lose no time to gather up as many resistance members who are held captive by the Germans.
In the meantime Greet cycles to the Zuidersingelkerk, where she notifies an additional five resistance members to drive up to the county jail. These members are: Kees Veldman, Geert Griek Veldman ("Piet), Ype Mulder ("Frans"), Jacobus Wilhelmus Zomer ("Zwarte Jan") and Luitzen van der Wal ("Mieke").
These men are part of the Transportation Group. They have two vehicles at their disposal, which the group has altered to have them resemble German Army trucks. They also wear German uniforms, to make sure the incident looks like a regular German prison transport, instead of a resistance-lead raid.

When both the trucks arrive at the county jail the rescued prisoners are ushered in the trucks as quickly as possible. One truck has given the group problems before to the point where they had to fix it. This morning the engine stalls and one of the men needs to crank it to get the engine going again. Member "Mieke" loses his pistol while doing so.
Both vehicles leave the premises at 7:45 a.m.
One drives towards Beilen en Westerbork, the other truck reaches Friesland through Veenhuizen.

Mr. S. Schoon, the writer of the book De Knokploeg van Noord Drenthe (Assault Group of Northern Drenthe), written in 1970, claims that 29 members of the resistance were freed during this particular raid. More recent accounts mention that at least 31 people were brought to freedom, and all of them survived the war.

The Assault Group of Northern Drenthe calls themselves Gideons Gang, and they retreat in the woods of Appelscha, on the border of the counties Drenthe and Friesland. In the woods they have a hideout, which they call Prince Bernhards Base, after Prince Bernhard of Lippe-Biesterfeld, the spouse of Queen Juliana of The Netherlands. They keep crossing the German occupiers by arranging acts of resistance for the remainder of the Second World War. But not without having to make some significant sacrifices: on December 30th 1944 Freerk Datema lost his life during a fight with a German reconnaissance patrol group. Jacob Zomer died in April 1945, a mere month until the Netherlands officially signed the surrender with Germany.

This particular raid, to free the members of the resistance movement from the County Jail in Assen, was a major success.
The Dutch government-in-exile in London, had indicated to Gideons Gang, through the means of secret agent Bob Michels, that the raid would be prohibited, due to it being too dangerous and because of the fear of severe retaliations that the Germans would unleash upon civilians. This, however did not deter Gideons Gang to go ahead with their plan, with the successful outcome we know of today.
The fear of the occupier taking revenge on Dutch citizens never came to fruition: the Germans never did retaliate.