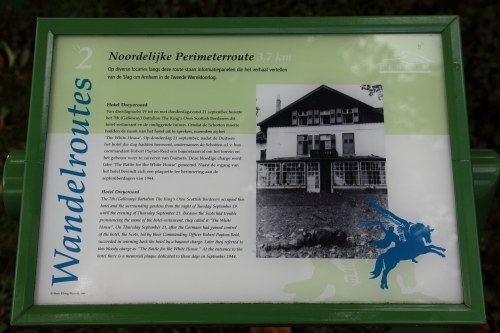 Hotel Dreyeroord
The 7th (Galloway) Battalion The King's Own Scottish Borderers occupied this hotel and the surrouding gardens from the night of Tuesday September 19 until the evening of Thursday September 21. Because the Scots had trouble pronouncing the name of the hotel-restaurant, they called it 'The White House'. On Thursday September 21, after the Germans had gained control of the hotel, the Scots, led by their Commanding Officer Robert Payton-Reid, succeeded in winning back the hotel by a bayonet charge. Later they referred to this bloody charge as "The Battle for the White House", At the entrance to the hotel is a memorial plaque dedicated to those days in September 1944.