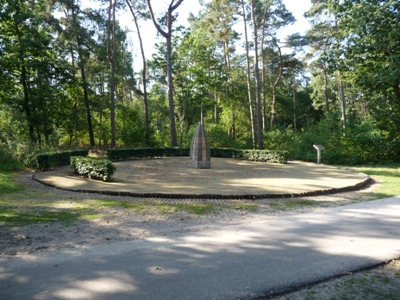 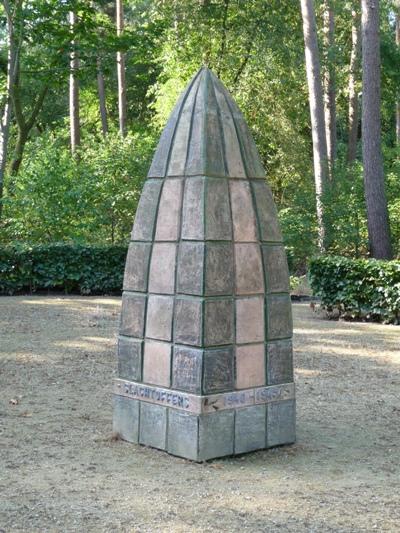 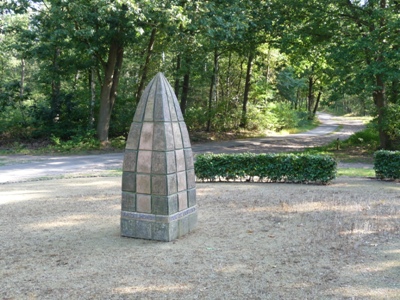 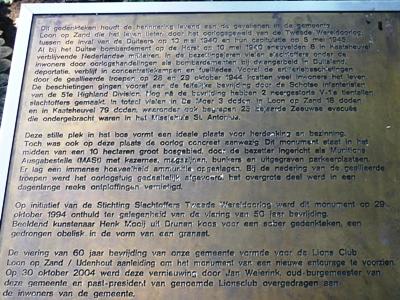 This monument is located in the woods between Loon op Zand and Kaatsheuvel.

Text on the monument:
This memorial keeps the memory alive of the fallen in the municipality of Loon op Zand who lost their lives as a result of the violence of the Second World War between the invasion of the Germans on May 10, 1940 and their capitulation on May 5, 1945.
Already in the German bombardment of the Horst on May 10, 1940, 8 Dutch soldiers staying in Kaatsheuvel were killed. During the occupation, victims fell among the inhabitants due to acts of war such as bombing during forced labor in Germany, deportation, stay in concentration camps and executions. Especially the artillery bombardments by the Allied troops on 28 and 29 October 1944 killed many residents. The shelling preceded the actual liberation by the Scottish infantrymen of the 51st Highland Division. Even after the liberation, 2 crashed V-1s left dozens of victims. A total of 3 people were killed in De Moer, 18 people in Loon op Zand and 79 in Kaatsheuvel, including 25 elderly Zeeland evacuees who were housed in the Mission House St. Antonius.

This quiet place in the forest is an ideal place for commemoration and reflection. Nevertheless, the war was also clearly present at this place. This monument stands in the middle of a 10-hectare forest area, converted by the occupying forces as Munitions Ausgabestelle (MAST) with barracks, warehouses, bunkers and excavated parking spaces. An immense amount of ammunition was stored. As the Allied troops approached, some of the weapons of war were removed, but the vast majority were destroyed in a series of explosions lasting several days.