Description:
The Newfoundland Volunteer Service Medal was introduced on November 6th, 1981 in order to honor the inhabitants of New Foundland and Labrador who had served in the British armed forces outside this province, on the condition that recipients had not been awarded any other decoration for services during the war and had served between September 3rd, 1939 and September 2nd, 1945.
Eligible are those having served in the Imperial Forces, the Newfoundland Forestry Unit, the Merchant Navy, the Newfoundland Regiment or any other unit approved by the incumbent Lieutenant Governor.
The circular decoration was created in bronze and measures 1.41 inch in diameter. On the obverse the text: NEWFOUNDLAND VOLUNTEER SERVICE MEDAL 1939-45 is engraved around the crown and the initials of King George VI, adorned with a Newfoundland caribou. The reverse depicts two lions with the goddess Brittania in between, holding a javelin in her right hand and with sunrays behind her back.
The decoration is suspended from the ribbon by a styled claw on top of the medal. The ribbon, 1.41 inch wide, has seven coloured bands in the sequence red, white, blue, maroon, blue, white and red. 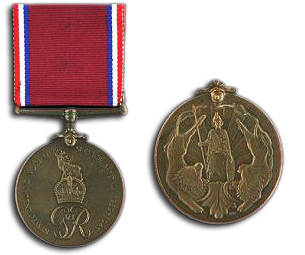