The Minesweepers, Sub-chasers and Escort vessel badge (Kriegsabzeichen für Minensuch-, Ubootsjagd- und Sicherungsverbände) better know as the Minesweepers badge (Minesuch abzeichen) was instituted on 31-08-1940 by the Commander in Chief of the Kriegsmarine (German Navy) Grossadmiral (Grand Admiral) Erich Raeder. He directed Otto Placzek to create a special badge for the mine sweepers of the Kriegsmarine. This in order to reward the sailors and officers of the Kriegsmarine and the Merchant Marine employed in its service. After 1943, this award was also conferred upon members of the Luftwaffe Marine-Sicherungs-Verbände.
The award consists of an gold oak leaf wreath, with in its center a silver water sprout rising from the waves of the sea below. The waves and the sea are dark silver/black. The idée for the water sprout was inspired by a propaganda photo, which was published in the militairy magaziene "Fahrten und Flüge gegen England" in the summer of 1940. De wreath is made up of 7 bunches of 2 oak leaves on each side with a single leaf at the top, partly covered by the eagle that is positioned at the top. Each crossing of the bunches is punctuated by a pair of acorns. The eagle has his wings spread and is clutching a swastika in its claws. The bottom has a tie that is formed by 3 raised lines, with an acorn at each corner. The height of the award measures, from the bottom towards to top of the eagles head 2.1" (54 mm) and the width is 1,7" (43,5 mm). The width of the wreath is 0,29" (7,5 mm) and the eagles wingspan is 1,1" (28mm). There are also versions that measure 2,2" (56 mm) in height, 1,7" (45mm) in width, a wreath width of 0,3" (8 mm) and with a wingspan of 1,18" (30mm). The reverse has usually a large flat pin mounted vertically but there are also versions with a shorter pin mounted horizontally. This version also has a hook mounted on the back of the eagles head. Most badges show the mintmark on the reverse and have a silver finish with a silver backing while others are gilded. These are mostly of a later production. The quality of these badges can range from poor to very high. The specimens of the highest quality are made of brass, these are finely detailed with a segmented swastika. The wreath is also finely gilded, the water sprout is silver-plated and in some examples even the waves. In these specimens the waves are chemically blued or blackened. The lesser quality examples are made of zinc, pot or monkey metal. These are poorly struck with a very inferior finish. The principal manufacturer was Schwerin from Berlin. (FEC. OTTO PLACZEK AUSF. SCHWERIN BERLIN); others: F.W. Assmann & Sohn from Lüdenscheid, (A) Adolf Scholze from Grunwald ad N., (A.S. or A.S) Rudolf Karnet & Sohn from Gablonz ad N., (R.K.) Aurich from Dresden, (LM) Rudolf Souval from Vienna, (R.S.) Wilhelm Deumer from Lüdenscheid, (L/11) Steinhauer & Luck from Lüdenscheid, (L/16) B.H. Mayer from Pforzheim, (L/18) and Hymmen & Co from Lüdenscheid. (L/53)

The Minesweeper badge was presented in a paper bag with an image of the award printed on it in black. The paper bag could have many different colours. It could also be presented in a blue box with a navy blue velvet base and a white silk lid. In both cases it was presented with a standard citation. The award was worn on the lower left breast pocket, underneath the Iron Cross First Class, or equivalent.

- Completion of 3 operational sorties,
- the recipient had been wounded during an operational sortie,
- the ship was sunk due to enemy action,
- for exemplary conduct in the execution of his duties over a 6 month period,
- the completion of a specially dangerous mission in a mined area,
- escort duty for 25 days or more,
- a specific mission had been successfully completed. 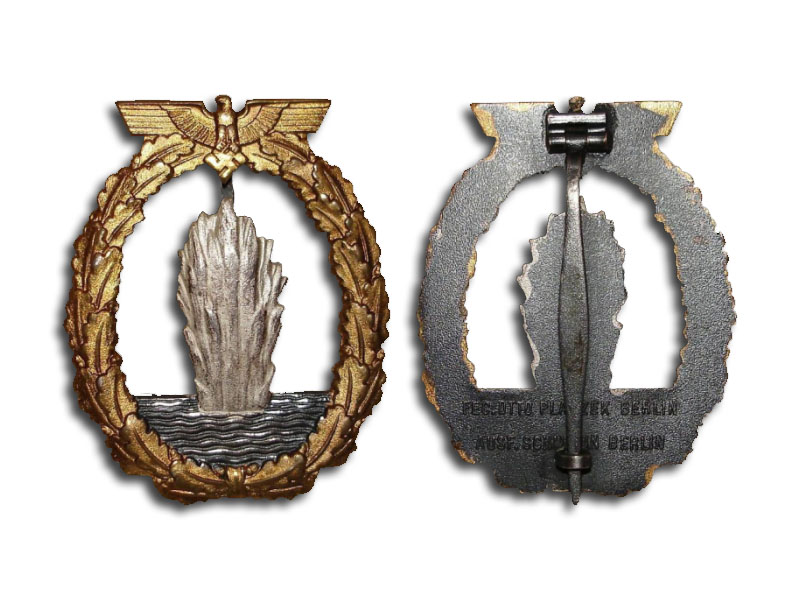