The decoration was designes by Thomas Hudson Jones of the United States Army Institute of Heraldry. The obverse of the golden, oval shaped decoration shows an eagle with elevated wings and measures two and one-sixteenths inches in width and two and five-eighths inches in height. The eagle holds two olive branches in its claws that extend upward and terminate at the eagle's wings. The soaring eagle symbolises the spirit of the government in whose service the Four Chaplains gave their lives. The olive branches symbolizes spiritual peace and renascence. The reverse show an open book with the four names of the Four Chaplains. Above the left side of the book a cross is shown and above the right side are shown the Tablets of Moses and a star of David, symbolising the four faiths of the Roud Chaplains. An olive wreath extends upward from the base of the medal.
The ribbon has for a basic color the same color as the Medal of Honor to represent courage courage above and beyond the call of duty. The black edge stripes symbolize the "last full measure of devotion" rendered by the Four Chaplains.

The decoration has only been awarded porthumously to the next of kin of the four chaplains on 18th January 1961 by Secretary of the Army Wilber M. Bricker. Its regulations however have been set up in a way that Congress could award it to others. 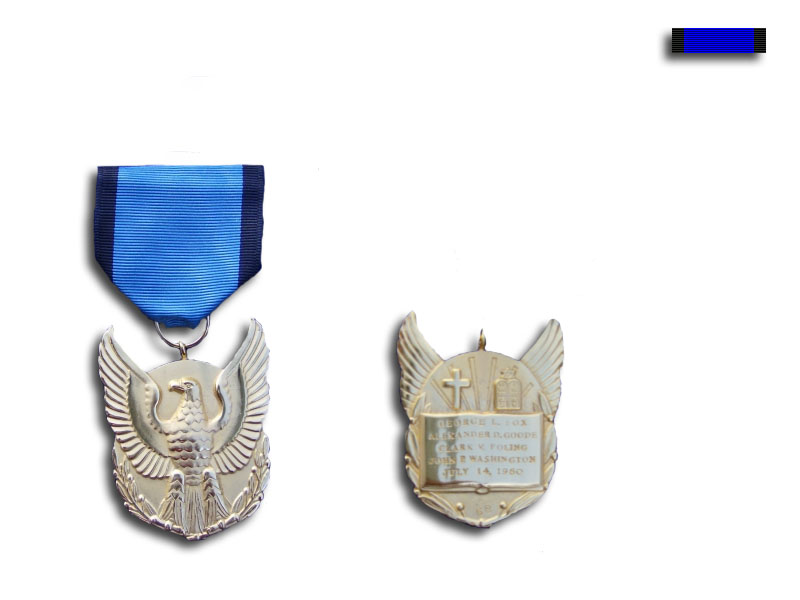