George L. Fox was born on in Lewistown, Pensylvania on 15th March 1900 as one of five children. At the age of 17 he joined the U.S. Army and fought as a Medical Orderly on the Western Front, earning the Silver Star, Purple Heart and French Croix de Guerre. After the war he finished High School and worked for a trust company. Following he went studying at the Moody Bible Institute and at the Illinois Wesleyan University. In 1923 he got married an became father in 1924. He graduated in 1931. After his graduation he became a Methodist preacher in Downs, Illinois and later Rye, New Hampshire. After joining the Boston University School of Theology he becam an ordained minister in 1934. Following this he took on a church in Waits River, Vermont, and for a second time became a father. He remained in Vermont, moving church twice and becoming the state chaplain and historian for the American Legion.

When the Second World War broke out, Fox joined the Army again in 1942. On the same day his oldest child (son Wyatt Ray) joined the Marine Corps. Late 1942 he was transferred to Camp Myles Standish in Taunton, Massachusetts and attended Chaplains School at Harvard University, England. There he met fellow chaplains Alexander D. Goode, Clark V. Poling and John P. Washington. In January 1943, the chaplains embarked on board the U.S.A.T. Dorchester for a journey with 900 military to Greenland. On 2nd February 1943 the ship was torpedoed by U-223. George L. Fox stayed, together with the other three chaplains with the men that could not leave the ship and died.

Synopsis:
"For extraordinary heroism in connection with military operations against an armed enemy in action against enemy forces on 3 February 1943. Chaplain Fox was one of four Army Chaplains aboard the U.S.A.T. Dorchester which was torpedoed in the North Atlantic. He and his comrades bravely brought order to panicked soldiers as the ship was sinking and, when no more life jackets were available, he gave up his own life jacket to another man. Chaplain Fox's intrepid actions, personal bravery and zealous devotion to duty at the cost of his life, exemplify the highest traditions of the military forces of the United States and reflect great credit upon himself, his unit, and the United States Army."
War Department, General Orders No. 93 (1944).
Awarded Posthumously.

Awarded posthumously for brave conduct, beyond the call of duty, during the sinking of the U.S.A.T. Dorchester.
On 2nd February 1943 the U 223 spotted a convoy. The U boat closed in and fired a torpedo which struck the Dorchester shortly after midnight. Hundreds of men packed the decks of the rapidly sinking ship and scrambled for the lifeboats. Several of the lifeboats had been damaged and the four chaplains, Methodist Reverent George L. Fox, Rabbi Alexander D. Goode, Reformed Reverent Clark V. Poling and roman Church Fryer John P. Washington, began to organize frightened soldiers. They distributed life jackets from a locker and when the supply of life jackets ran out, each of the chaplains gave theirs to other soldiers. When the last lifeboats were away, the chaplains prayed with those unable to escape the sinking ship. 27 Minutes after the torpedo struck, the Dorchester disappeared below the waves with 672 men still aboard. The last anyone saw of the four chaplains, they were standing on the deck, arms linked and praying together.

Second Purple Heart awarded posthumously as an oak leaf cluster for on the ribbon of the first Purple Heart. 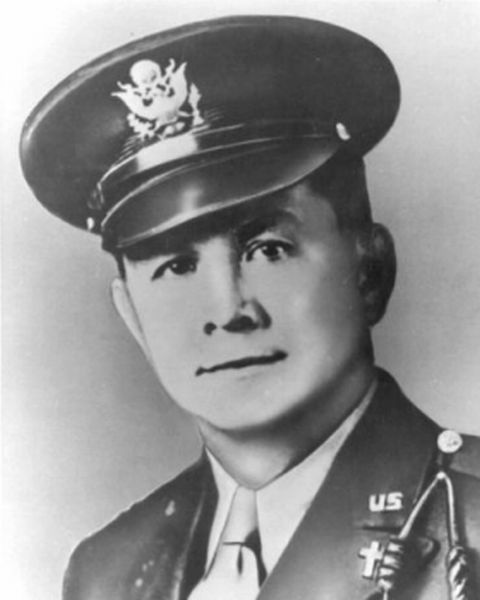