Alfred Montag entered service with the Wehrmacht on January 10th, 1939.
He served with the Bundeswehr from June 11th, 1957 until March 31st, 1974. Here he finally reached the rank of Oberstleutnant.

According to his recommendation to the Eichenlaub, the awarding for the DKiG was done on August 4th, 1943.

The Soviets launched a major attack on the 30.01.1944 in the sector of the 110. Infanterie-Division, which was positioned 50 kilometers south of Bobruisk. The assault, which was supported by armour, succeeded in breaking into the German lines at several locations. In the face of this the 2./Sturmgeschütz-Brigade 909 under the leadership of Hauptmann Montag intervened. The Sturmgeschütze along with the infantry managed to retake their old positions after heavy fighting, during which numerous enemy tanks were destroyed.

Later, on the 19.02.1944, the enemy attacked the sector of the Füsilier-Bataillon 110 after an hour-long artillery barrage. The battalion could not hold them and was forced to pull back 2 km to the second defensive line. However by around midday the Bataillon, reinforced by Montags Sturmgeschütze and the Grenadier-Regiment 255, was able to launch a counterattack that succeeded in recapturing the old main battle line.

For his contribution to the German defensive victories in these two actions, Hauptmann Montag would be decorated with the Knights Cross.

Montags recommendation for the Oakleaves reads as follows

1) On the 25.02.1945 Hauptmann Montag launched a lightning-fast counterstroke with just 4 Sturmgeschütze into the deep flank of an enemy force, the latter having had taken Katzem in an overwhelming attack from the south while continuing to penetrate to the north and northeast. In the course of this brave and extraordinary action Hauptmann Montag, who led the strike from the front in his own Sturmgeschütz, succeeded in halting this enemy attack. The result was that a decisive enemy breakthrough between the XII. SS-Korps and LXXXXI. Korps was prevented (see sketch).

2) On the 26.02.1945 the enemy attempted to encircle and take Holzweiler with overwhelming strength. Hauptmann Montag launched a counterattack into the midst of the enemy attack formation with 6 Sturmgeschütze and prevented the premature loss of Holzweiler. He executed this extraordinarily brave counterthrust despite the enemy having 60 tanks at his disposal here (see sketch).

4) On the 01.03.1945 Hauptmann Montag and 6 Sturmgeschütze penetrated through the blocking position at Erft (facing towards the east) that was held by the US 83rd Infantry Division, and thereafter drove into the flank of the bulk of the US 2nd and 5th Armored Divisions (which were moving towards the north). Despite heavy fire from the tank destroyers (M10s) sent to intercept them as well as an infantry company equipped with close combat weapons, the Brigade was still able to carry out a successful attack as a result of the brilliance of its commander. In the face of constant fighter-bomber attack Montag and his men were able to destroy 10 tanks, an artillery battery and 17 trucks. Among the destroyed enemy tanks was at least one 40.8 ton Jackson Panzer (see sketch).

5) On the 02.03.1945 the Sturmgeschütz-Brigade led by Hauptmann Montag, and supported by a Kompanie of friendly infantry, once again punched through the enemy blocking position. They then recaptured the village of Kapellen (6 km NE of Grevenbroich) and continued to thrust an additional kilometre towards the northwest. In the course of this attack, despite heavy enemy fighter bomber activity, 15 enemy tanks and numerous trucks were destroyed. 45 prisoners were also taken.

Hauptmann Montag has shown consistent extraordinary bravery during the defensive battle between the Ruhr and Erft. His tactical decisions and the execution thereof were of decisive importance in the battles on the open flank of the Korps.


The nomination was received by the Heerespersonalamt (HPAArmy Staff Office) from the troop on 28-4-1945 and approved by the Corps and by the OB West. Missing is a statement by the Army and by the Army Group (Heeresruppe). Major Joachim Domaschk decided "Oak Leaves yes" but deferred. Heeresgruppe Bthe Sturmgeschütz-Brigade had already surrendered together with the Heeresgruppe B in the Ruhr Pocket. The nomination was therefore left unfinished according to AHA 44 Ziff. 572. The nomination list of the higher grade of the Knight's Cross of the Iron Cross with Oak Leaves confirms the entry of 28-3-1945. Noted here is a comment indicating "deferred". A formal presentation has not happened. The sequential number "868" was assigned by the Association of Knight's Cross Recipients (OdR). The presentation date was assigned by Fellgiebel. Alfred Montag was a member of the OdR. 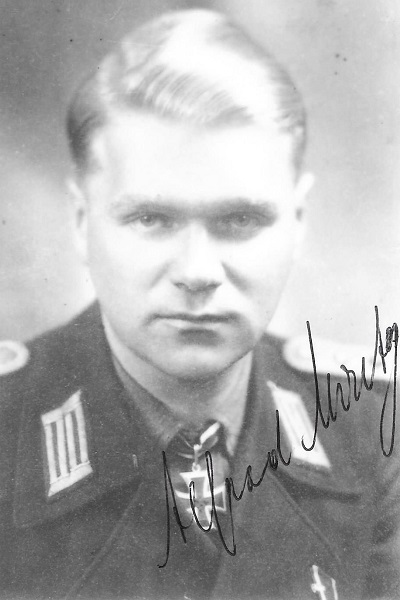