On the 14.07.1944 the English captured the heavily contested Hill 112 following hours of artillery drumfire and the liberal use of artificial smokescreens. In response SS-Oberscharführer Egger (a Zugführer in the 1./s.SS-Panzer-Abteiling 102) immediately initiated a counterthrust through the thick smoke on his own initiative with 4 Panzer VIs. Despite the dense smoke Egger skillfully led his Zug into the flank of the enemy, and in the combat which followed a total of 14 enemy tanks and 7 heavy anti-tank guns were destroyed. A pursuit thrust after this gave friendly infantry the opportunity to once again attain the old frontline. SS-Oberscharführer Egger thus had a decisive share in the immediate recapture of the tactically vital Hill 112 through his independently conducted actions.

During this action SS-Oberscharführer Egger and his crew personally destroyed 7 enemy tanks, and in doing so raised Eggers total of tanks destroyed to 68. 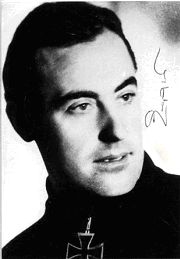