SS-Hauptsturmführer Poetschke is a Kompanie commander in the SS-Panzer-Regiment 1, and has already heavily distinguished himself through boldness and decisiveness in the fighting in Poland, France, Yugoslavia and Russia.

Already on the 05.11.1942 he was awarded the German Cross in Gold for his exemplary leadership qualities, after his Kompanie had been named in the Wehrmachtbericht.

In the heavy winter fighting of 1943/44 SS-Hauptsturmführer Poetschke was brave and firm in all crises, heavily contributing to all successes of the Regiment and being awarded the Wound Badge in Gold after receiving his third, fourth and fifth wounds.

During the breakout battle of the encircled 1. Panzerarmee in the time period 04.03.-07.04.1944, SS-Hauptsturmführer Poetschke led the armoured group of the Division. In this time, during which he personally led attacks and counterthrust with only a few vehicles at any given moment, he had a significant share in the successes of the Division in both attack and defense.

During the crossing over the Niczlawa stream the village of Dawidkowce (heavily occupied by Russian forces) formed a strong barrier to our advance. After a morning attack on the 01.04.1944 by the 19. Panzer-Division along both sides of Davidkowce-Losiacz road bogged down due to the heavy enemy resistance, strong snowstorms and the total exhaustion of the attacking Grenadiers, a renewed assault was commenced at 16:00 on the same day, this time with the support of two Kampfgruppen composed of soldiers from the two Panzergrenadier Regiments of the Division as well as the armoured group of SS-Hauptsturmführer Poetschke. With the enemy pressure from the wood to the south of the road shielded by the Kampfgruppe of the Grenadier-Regiment 1, SS-Hauptsturmführer Poetschke, along with 2 Panthers and the subordinated Kampfgruppe of the Grenadier-Regiment 2 (totalling some 40 Grenadiers) reached the eastern edge of Davidkowce in a relatively short time. After hard urban combat Poetschke and his men broke into the town, but then the attack stalled here in the face of fierce enemy resistance.

This unexpected penetration created a panic among the Russians. A such even though SS-Hauptsturmführer Poetschke was conducting the urban fight with only his Befehlspanther and 10 Grenadiers at his disposal, the enemy commenced a head-over-heels retreat from the village while leaving behind numerous materiel. After two-and-a-half hours of hard combat the village was firmly in control of the handful of Grenadiers, and was held against all counterattacks.

During the capture of Davidkowcze the following materiel was destroyed or captured:

With the capture of Davidkowcze, the groundwork for the unimpeded crossing of the 1. Panzerarmee over the Niczlawa stream to the west was created. The significance of this outstanding achievement was acknowledged in a hand-written text by the commanding general, Generalleutnant Nehring.

As a result of his continual battlefield prowess before the enemy, his extraordinary bravery (seen here especially), and the great decisiveness that he demonstrated during the seizure of Davidkowcze, SS-Hauptsturmführer Poetschke is clearly worthy of being awarded the Knights Cross to the Iron Cross.

SS-Sturmbannführer Poetschke has especially distinguished himself as commander of the I.(schw)/SS-Pz.Rgt. 1 LSSAH during numerous actions in all theatres of war. He conducted especially praiseworthy actions during the Ardennes offensive in the time period 16.-24.12.1944, where he participated in the armoured thrust to the Ambleve stream.

Over the course of numerous, ever worsening situations that demanded the utmost from every leader, he repeatedly showed himself to be a beacon of steadfastness and command over the situation.

After the thrust along the road E could no longer be carried out due to a bridge being blown up, only the road D was available for a further advance. But this road was blocked by the village of Stoumont, a village that stood as an almost intractable bulwark against tanks.

The immediately launched attack thus soon came to a halt, as the road was decisively blocked by the fire from 4 Pak-Flak and 6 heavy Pak from the village edge as well as from a few enemy tanks along the forest edge north of Stoumont. Clearly recognizing the fact that only a ruthless employment of materiel here in a head-on attack would bring success, Poetschke set himself at the head of his Panzers and inspired them forward by his example. Despite this however the attack made no headway, and a few vehicles began slowly pulling back in order to again reach safe terrain.

In this critical moment SS-Sturmbannführer Poetschke was roused to great fury. He stood up on his Panzer, grabbed a Panzerfaust and threatened to fire upon any of his Panzer crews that would roll on but a single step towards the rear.

This brutal measure was decisive. Undeterred by the murderous fire and friendly losses, the Panzers thrusted wildly into the village. There they created a great panic and were finally able to break the hard enemy resistance.

150 prisoners, 4 Pak-Flak, 5 heavy Pak, 4 Shermans and much additional war materiel and enemy dead fell into our hands. This success can be credited to the bravery of SS-Sturmbannführer Poetschke and his ruthless devotion to duty.

During the fighting in the Gran bridgehead SS-Sturmbannführer Poetschke once again was heavily involved in the success of the armoured group of the Division.

At the head of his Abteilung he led the Panzers along the path towards the destruction of the enemy bridgehead with great attacking spirit and uncommon energy, mastering numerous, critical situations through his bravery and resilience in the face of adversity. His boldness and courage were an example to, and the backbone of, the men of his Abteilung as well as all members of the armoured group.

After breaking though the enemy Pakfront near Hill 190 and southeast of Nemet-Szögyen, he launched a ruthless thrust without regard for his flanks. By this he created the necessary conditions for the crossing of the Grenadiers over the Parisz river in the face of a bitterly defending foe.

After a bridge was built on the 18.02.1945, he sent his Abteilung across and started a thrust to the south during the night. In the nocturnal combat his Panzergruppe succeeded in delivering the crushing blow against the southern defense of the enemy bridgehead. In a furious armoured drive his Panzers overran the wildly firing enemy Pak nests near KisMuzslapsz. plus those before Muzsla and Parkany. Contact was established with the southern group that was crossing the Danube in rubber boats, and the thrust was continued until it reached the Gran river, with the infantry also storming alongside.

During the fighting against the remainder of the bridgehead SS-Sturmbannführer Poetschke led his Panzergruppe in bitter night battles on the 21.02.1945 at Köhid-Gyarma and on the 24.02.1945 at Kemend, achieving outstanding victories that were decisive in the overall course of the attack.

During the fighting in the Gran bridgehead during the time period 17.-24.02.1945 his Abteilung achieved the following successes:

In recognition of his bravery and singular accomplishments, I ask that SS-Sturmbannführer Poetschke be awarded the Oakleaves to the Knights Cross of the Iron Cross. 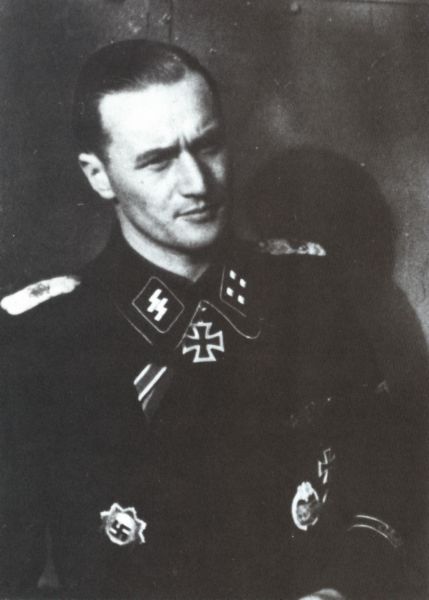