Walter Schmidt entered the NSDAP the 09.11.1934 and the III. / SS standard "Germania" in 1935.
In 1937-1938, he was sent to the SS Junkerschule Bad Tölz and then promoted to SS Untersturmführer.
As a platoon leader in the 4th company of the Germania Regiment he took part in the Polish campaign.
He then became the leader of the armored car platoon in the SS Verfügungsdivision during the Western campaign.
From June 1941 on he fought in the SS division "Wiking" in Russia.
In July 1943 he was leader of the III. / "Westland".
For the defensive successes of his battalion in the Isjum area, he was awarded the Knight's Cross on August 4, 1943.
In February 1944 it proved itself in the outbreak the Cherkassy cauldron again, for which he was awarded the oak leaves on May 14, 1944 as SS Hauptsturmführer.
In January 1945 he became a group commander at the SS Junkerschule Bad Tölz and in
March 1945 commander of the SS Panzer Grenadier Regiment 96 in the 38. SS Div. 'Nibelungen'.
After the war he was Oberstleutnant der Reserve in the Bundeswehr.

"Starting from locations on either side of Tscherwonyj Schachter, the Soviets planned to break through west of Izyum and drive on to Barwenkowo. During their attack the Soviets succeeded in gaining the village of Sawodskoje that lay south of Tschcrwonyj Schachter. Once the village was recaptured by friendly forces, the II./SS-Pz.Gren.Rgt. "Westland", under the command of SS-Hauptsturmführer Walter Schmidt. was tasked with the defense of Sawodskoje.

A critical situation developed for the defending "Westland" Regiment after enemy units had penetrated into both the eastern and western areas of Sawodskoje. Holding the village was of great importance, for it offered the last area from which observation of the enemy bridgeheads and crossings to Tscherwonyj Schachter was possible. Moreover, the Soviet's lines of communication between the eastern and western spearheads would remain severed only as long as Sawodskoje remained in German hands. Thus, significant Soviet infantry and tank forces were assembled for the capture of Sawodskoje. Every Soviet attack was thwarted throughout two days of bitter fighting and counterattacks. During the fighting on 19.07.1943, SS-Hauptsturmführer Schmidt distinguished himself after Soviet forces supported by tanks infiltrated the southeastern portion of Sawodskoje. With only a handful of men, the battalion commander launched a calculated counter attack that eliminated the enemy penetration. Following bitter close combat with the commander in the thick of the fighting the enemy was pushed out of Sawodskoje. In the process, several Soviet tanks were destroyed in close combat.

On 20.07.1943, the number of Soviet attacks became more and more frequent. Heavy artillery fire, in conjunction with several Katyusha rocket launchers, prepared the way for the coming attack. However this attack was repulsed through the personal bravery of SS-Hauptsturmführer Schmidt. Despite this success a second crisis developed in the evening on 20.07.1943. when Soviet infantry, supported by tanks, managed to infiltrate the western portion of the Sawodskoje. Once again, Schmidt counterattacked with a handful of men and ejected the Soviets altogether. SS-Hauptsturmführer Schmidt's personal bravery and exemplary initative allowed the II./SS-Pz.Gren.Rgt "Westland" to hold the village of Sawodskoje, repel every Soviet attack, and prevent the planned Soviet breakthrough. The German retention of Sawodskoje provided for artillery observation that was of utmost importance for the continuation of the fighting and the recapture of Tscherwonyj Schachter. The resupply and replacement of Soviet forces was severely hampered through the observed fire of heavy artillery. There is reason to believe that SS-Hauptstumführer Schmidt's decision to hold Sawodskoje, to the very last man, has had a tremendous impact on the overall course of the battle. Gained too was valuable time that allowed for the reorganization of the German defense in order to prevent a concerted Soviet attempt to break through towards the south in the direction of Barwenko.

SS-Hauptsturmführer Schmidt has participated in the campaigns in Poland, France, and in the East. On every occasion, Schmidt proved his worth as a brave, conscientious, and cold-blooded officer who has managed to triumph in every operational crisis. To his men he represents the epitomy of "combat ready." His achievements of the past merited recognition with the award of the Iron Cross 1st Class and the German Cross in Gold. SS-Hauptsturmführer Schmidt's achievements during the defensive battles west of Izyum justify the decoration of the Knight's Cross to the Iron Cross."

"I. In the period from 24-30.11.1943, the II./SS-Pz.Gren.Rgt. Westland (while attached to the 72. Jäger Division) was employed southeast of Cherkassy to seal off a breach there. The battalion had the order on 28.11. to attack from Smogailowka and take the brickyard area on the southeast of Cherkassy. The northwestern part of Smogailowka was ordered as the forming up location, but in the morning hours of 28.11. it turned out to be surprisingly full of strong Russian infantry forces. In the brickyard area a group of more than twenty enemy tanks was visible. Even the far-flung cornfield north of the brickyard contained strong enemy infantry forces.

The danger of the enemy renewing their attack and expanding the breach area was recognized by SS-Hauptsturmführer Schmidt. Without waiting for the arrival of supporting elements (a single heavy infantry gun platoon), he cleared the enemy from the northwest part of Smogailowka and penetrated into the northeastern part of the brickyard; the enemy was completely surprised. The battalion counted a yield of...
- 2 Guns (7.62 cm)
- 3 Anti-tank guns (4.7 cm)
- 21 Anti-tank rifles
- 18 Machine-guns
- 60 Machine-pistols
- 83 Guns

1 officer and 13 men were captured, and approximately 300 enemy dead were counted.

The battalion consisted of a fighting strength of 130 NCOs and men at the start of the attack. From the last wave of replacements seven Transylvanian recruits were added, and they experienced their first combat action. The success of our attack is therefore in a large degree due to the excellent dynamism and personal bravery of SS-Hauptsturmführer Schmidt. The danger of a renewed Russian attack after they received more heavy weapons was a strong one. Schmidt even fought in the front line with his men and as a consequence showed to be a high example of courage and bravery to them.

II. On 30.11.1943, the enemy moved over the road from Cherkassy-Smela with strong forces. Battalion Schmidt was attached to the 42. Jäger Division, and was due to move from the east and take some widely dispersed homesteads. The enemy had taken these farms and surrounding cornfields and set up defenses with stronger forces. Due to the previous heavy fighting, the battalion only had a small amount of firepower with which to defend themselves against the tenacious enemy. Since the terrain was uneven and closed-in, direct leadership of the men was not possible. In this situation, SS-Hauptsturmführer Schmidt sprang into action and, standing on a shot-up tank in the cornfield, incited his men with a loud voice to proceed farther on regardless of enemy fire. Inspired by this, his battalion managed to not only achieve the ordered attack objective, but also pushed 3 km deep into the enemy, up to the river.

Thus, once reached, this achieved the halting of the Russian attacks against the main road for three days. This permitted the establishment of a new security line west of the main road during this time.

III. In the southwest area of the Cherkassy pocket, SS-Hauptsturmführer Schmidt maintained himself to the highest degree during the very tough daily defensive fighting. His capabilities, luck, personal momentum, and outstanding bravery were appreciated in the line of battle. Although his battalion was exhausted, the enemy's failures in the battles at Buda 'Orlowezkaja, Mlejew, Skiti, Tscherepin, Derenkowez, Arbusino, and west of Korsun nonetheless came to pass on account of Schmidt's persistent and ceaseless efforts. In doing so he bought a complete success for the defense of the regiment. Also, the inexperienced infantry and attached elements of the Panzerjäger battalion and the Flak battalion were directed so they withstood the enemy onslaught in the manner of experienced infantrymen, each guided by the commander through his energy and exhilarating personality.

During the breakout of the pocket itself, SS-Hauptsturmführer Schmidt achieved a special distinction. His battalion marched at the start of the second meeting with the division, about 800 m northwest of Hill 193.3, first establishing a blocking position to the east with strong security. On the north edge of the forest to the southeast of Dshurshenzy, they captured one anti-tank and two machine gun positions, but were in turn attacked by the enemy coming from Dshurshenzy. They defended against this attack and pushed it back to the church. These measures, mainly due to SS-Hauptsturmführer Schmidt, were the basis for them first reaching the main road southeast of Hill 239.0 and later achieving the link-up that was made with our own forces outside of the pocket through the woods west of Pochapintsy.

In the intervening time, he had joined up with a large group of Heer comrades which increased the strength of the overall weak forces. Singly carried by the thought "We must get through!," Schmidt stormed forward at the head of his 300 assembled men to the forest northeast of Lysyanka. Following his example, the newly formed attack group always followed Schmidt. Therefore, SS-Hauptsturmführer Schmidt has contributed significantly to the impending breakthrough towards our own lines and did not falter in the process. 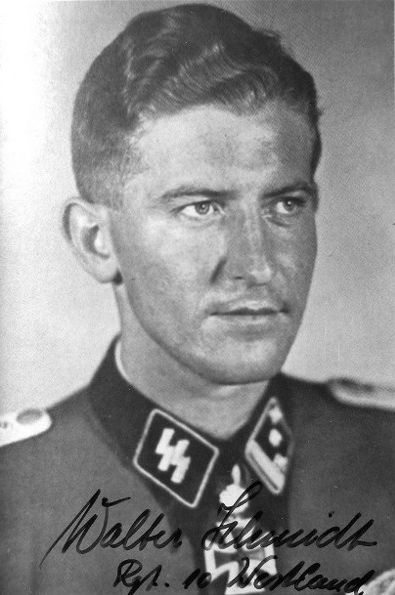 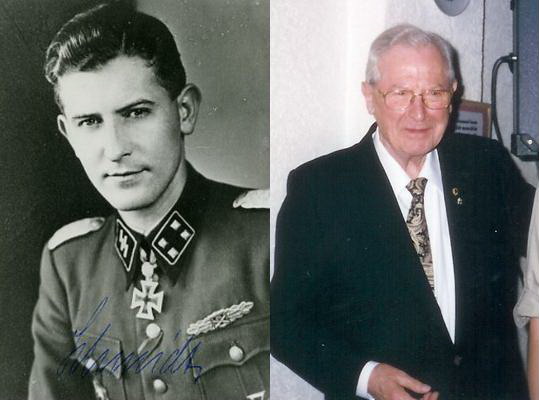