Barnbeck joined the 1st / Railway Battalion 4 in Berlin-Schöneberg in 1913 as a one-year volunteer. He was later transferred to Railway Battalion 25 and took to the field with it in 1914. In 1918 he began a company commanding course in Army Department C at the company commanding school in Briey; after completing his training, he was given the task of commanding the 9th Company. Discharged from the army in 1918 as a result of demobilization.
1936 as first lieutenant d. R. in I.R. 58 employed.
On May 13, 1937, he took over the regiment's 14th anti-tank company while being appointed active captain.
1939 Commander of the I. / I.R. 167. Used in the French campaign, he was seriously wounded there on June 9th, 1940 near Givry on the Aisne, by a shot in the stomach and a bullet in the spine, he was taken prisoner by the French and was liberated in 1940 by German troops.
In 1940 he took over command of the III. / I.R. 194 and draws with this against Russia.
In 1942 he becomes commander of the I.R. 211, takes part in the fighting for Stalingrad. His regiment fought excellently and so he received the Knight's Cross on October 29, 1942.
1943 with the command of the I.R. 883 commissioned to lead him to the Wildflecken military training area, then commander of the G.R. 211.
In 1944 he took part in the 9th division leader course in Hirschberg / Silesia and was transferred to Army Group D as a division leader from June 8, 1944.
Hermann Barnbeck died on October 25, 1944 in the Minden hospital on site.

During the fighting in Stalingrad Oberst Barnbeck established the necessary preconditions for the capture of the entire city centre by the Division through a combination of bold initiative and inspiring personal bravery.

On the 14.09.1942, as the bulk of the Division thrust towards towards the Volga in a narrow wedge through the railroad area, Oberst Barnbeck had the mission of covering the former sector of the Division and protecting its current rear and extended right flank. When a favourable offensive opportunity presented itself on the 15.09.1942, Oberst Barnbeck decided to take on the well entrenched enemy forces despite the depleted fighting strength of his own Regiment in order to improve his connection with the Division by an attack. When the assault of his Regiment threatened to stall in the deep and bitterly guarded enemy defenses, Oberst Barnbeck (fighting from the foremost line) personally rallied elements of his men and led them into the enemys defensive position. His aggressive spirit here led to a breakthrough being forced. Oberst Barnbeck was the driving force behind the attack, constantly rushing to wherever the enemys desperate defense appeared to be halting the forward momentum of his exhausted men. Ultimately, after an excruciating struggle and tough melee combat, the attack led to the destruction of the Russian rifle brigade that was threatening the flank and rear of the Division.

In the end his battalion-strength Infanterie-Regiment 211 was able to secure a victory that also resulted in bloody losses for the enemy, which included over 1200 prisoners, 8 artillery pieces, 121 MGs and 56 mortars. This was only possible on account of Oberst Barnbecks continual and inspiring leadership in the foremost ranks of his Regiment.

Oberst Barnbecks independent initiative, personal bravery and skillful leadership have thus produced important results. Within a very short time, he and his Regiment managed to fight their way through to the Division, take the inner city firmly under control and ultimately make an important contribution to the Divisions continued operations that ultimately led to the capture of the entire city centre. 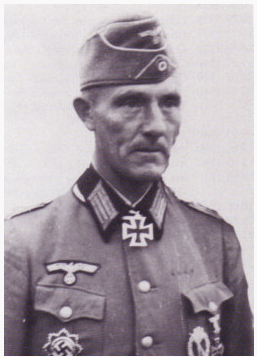