Fritz Hermann Michael Bayerlein was born on the 14th January 1899 in Würzburg, Germany. At the age of 18, he joined the 9. Bayerisches-Infanterie-Regiment (Bavarian- Infantry-Regiment) as a cadet and fought on the Western Front during World War I. In the last year of the war, he was awarded the Eisernes Kreuz 2 Klasse (Iron Cross Second Class).

After the war, Bayerlein was admitted into the Reichswehr and was promoted to Leutnant on the 1st January 1922, serving with the 21.Bayerisches Infanterie-Regiment. He held various posts in numerous units and studied at the Military Academy until the12th November 1938, when as a Major he was assigned, as the logistical officer, to the General Staff of XV. Armeekorps.

On 1st April 1939, he was named as Chief of Staff (Ia) of 10. Panzer-Division, participating in the campaigns in Poland and France. In February 1940, he became Chief of Staff (Ia) of XIX. Armeekorps of Generaloberst Heinz Guderian, from which Panzergruppe 2 was to emerge.
After participating in the initial successes in the invasion of the Soviet
Union, Oberstleutnant Bayerlein was transferred on the 5th October 1941 to North Africa, where he was named as the new Chief of Staff of the Deutsches Afrika Korps (DAK) under Generalleutnant Erwin Rommel. Rommel and Bayerlein worked well together and he managed to form a good relationship with the Italian units. For his leadership during the fighting in the Sidi Rezegh area and the retreat by the DAK from El Agheila in November 1941, he was awarded the Knight's Cross on the 26th December. Fritz Bayerlein was given temporary command of the DAK when General der Panzertruppen Walter Nehring was seriously injured during an air raid at Alam-al-Halfa.
During the Battle of El Alamein, he served under General der Panzertruppen Wilhelm Ritter von Thoma but when the latter was captured by the British on 4 November, Bayerlein again was put in temporary command. On the 7th December 1942, Bayerlein was named Chief of Staff of Panzerarmee Afrika, and as such he was promoted to Generalmajor on the 1st March 1943 and named German Chief of
Staff of the Italian 1. Armee. Shortly before the German surrender in
Tunisia on 13 May 1943, Bayerlein was evacuated to Italy as he suffered from rheumatism and jaundice.

On the 7th June 1943, Bayerlein was transferred to the Führerreserve des
Oberkommando des Heeres (Führer Reserve Supreme Army Command) and on the 6th July, he was awarded the Oakleaves to his Knight's Cross. On the 25th October, Bayerlein became commander of the Berlin-Brandenburg 3. Panzer-Division on the Eastern Front, where he led the division in the defense of Charkow, Nowo Iwanowka, Poltawa and on the River Dnjepr, as well as at Kiev and Uman. On the 10th January 1944, Bayerlein became the first commander of the Panzer-Lehr-Division, which was established in Potsdam in November 1943 and consisted of exhibition units of various tank training schools. In April, Panzer-Lehr was dispatched to Hungary and on the 1st May, Bayerlein was promoted to Generalleutnant. During that month; however, the division was recalled and sent to the Western Front in France to prepare for a counter-offensive against a possible Allied invasion. After the Allies had landed in Normandy, Panzer-Lehr, commanded by the energetic Bayerlein, was involved in the first
battles for Caen. Like so many other German armored units, the division
suffered heavy losses because of overwhelming Allied air superiority.
After the fighting around Caen and Tilly-sur-Seulles, the division was sent west in support of the German divisions around the town of St. Lo, defending the city against advancing American troops. With Panzer-Lehr, Bayerlein launched a successful attack on Port Herbert, capturing the town and holding it against numerous American counter-attacks. On the 11th July, Bayerlein launched a counter-strike in the direction of Le Dézert, deep in the characteristic Normandy bocage country. However, the attack was halted by an Allied air strike, causing the division to lose 20 tanks and forcing it to retreat across the Vire River. In the weeks that followed, the division engaged in a series of attritional battles against numerically superior Allied forces. For his achievements, Fritz Bayerlein received the Swords to his Knight's Cross on the 20th July.
A week after the Allies had taken St. Lo on the 19th July; the Americans launched Operation Cobra, the break-out of Normandy. Prior to the operation, the Allies launched a ferocious preliminary bombardment with some 2,000 aircraft. Panzer-Lehr, inching its way along the Périers-St. Lo road suffered most heavily; the division was virtually annihilated. On the 7th August, its remnants were deployed in a counter-attack in the direction of Avranches. The city was spared a recapture. Panzer-Lehr executed a fighting retreat out of Normandy and lost still more units in the Falaise pocket. When finally the heavily decimated division was pulled back across the Seine River, it was sent to Germany to rest and regroup for Operation "Wacht am Rhein" ("Watch on the Rhine", the Ardennes
offensive). Panzer-Lehr was located in the Saar region and was later
transferred to Paderborn, where it was sent into battle in the Saar region
and the Siegfried line with some 70 tanks.
In December, Bayerlein led his division in the Ardennes Offensive,
spearheading Hasso van Manteuffel's 5. Panzer-Armee. Bayerlein failed to capture Bastogne after the road leading to the town was opened by the unexpected retreat of Task Force Cherry. The better part of his armored units were sent to Margaret in the north in support of the 26.
Volks-Grenadier-Division. The division could no longer muster the necessary speed to capture Bastogne before American reinforcements arrived to secure the city. On 23 December, Bayerlein and his division took the town of St. Hubert. The division had advanced as far west as possible but ultimately, the German forces were forced to withdraw and again, Panzer-Lehr suffered heavily.
In January 1945, Bayerlein was relieved of his command and posted to the Führerreserve des Oberkommando des Heeres. On the 29th March, he was made commander of LIII. Armeekorps and was trapped in the Ruhr area, along with Army Group B of Generalfeldmarschall Walter Model. On the 15th April, after bitter fighting, Bayerlein -on his own accord- decided to enter negotiations with the Americans and surrendered his troops. The remaining German units in the Ruhr pocket surrendered a day later.

Fritz Bayerlein remained in American captivity from the16th April 1945 to the 2nd April 1947. During his imprisonment and afterwards, he wrote several books on his battle experiences during World War II and he also assisted Erwin Rommel's widow and her son Manfred in writing their book "The Rommel Papers". For a period of ten years, he also assisted the American Army Intelligence Service. In the sixties, he ran two shops selling Arabian tapestry in his hometown of Würzburg.
Fritz Bayerlein died on the 30th January 1970 at nearly 80 years of age.

Awarded for his battle-deciding leadership achievements in North Africa, particularly during the November battles around Sidi Rezegh and the withdrawal towards El Agheila. In this time he distinguished himself for both his achievements as a staff officer and a battlefield commander. After the commanding general of the Afrika-Korps had fallen out he led the Korps for over 3 weeks through very difficult situations. In this time he did a masterful job of fulfilling his missions.

Awarded for his achievements while assisting the efforts of the 1st Italian Army in holding up British forces on the southern Tunisian front. He particularly distinguished himself during a major Allied offensive against the Enfidaville Line that began on the 20.04.1943. Following hard combat, the Allies captured the commanding western part of the position at Djebel-Garci. In response Generalmajor Bayerlein personally led a counterthrust with two Kampfgruppen and succeeded in ejecting the Allies from the heights. By doing so he prolonged the time period in which the Enfidaville Line could be held onto.

"During the fighting in the area around Kirovograd, the 3rd Armored Division Brandenburg under the command of Major General Bayerlein has proved particularly successful."

"In the battle against three of the best English divisions, the Panzerlehr Division under Lieutenant General Bayerlein has proved outstanding."

Awarded for distinguishing himself with his Division during the fighting on the Normandy front. He and his men particularly distinguished themselves over the course of 3 weeks of heavy fighting in the Tilly-Hottot area. Here, particularly on the 14., 19. and 25.06.1944, Bayerlein mastered numerous crises and managed to prevent breakthroughs by British forces at the last moment. 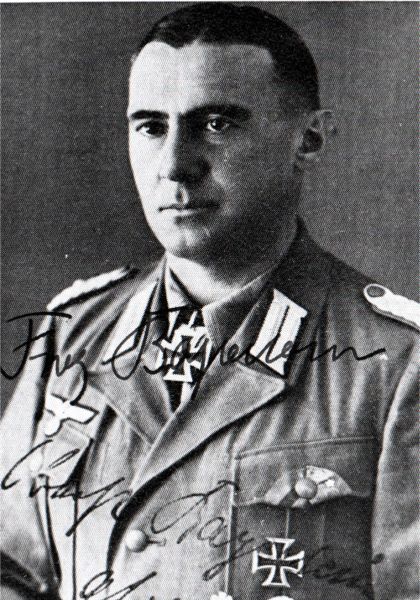