In most literature and documents his last name has been is being written as Meierdrass. According by himself written documents however, his name should be Hubert-Erwin Meierdrees.

for bravery during the Polish campaign

On 15 January 1942, the Soviets launched a major attack which threatened to sever the main highway at the town of Bjakowo. Meierdress, seeing the threat, formed an ad-hoc Kampfgruppe (battle group) from his StuG battery (down to less than 100 men) and assorted engineers, SS-police troopers and Artillery reconnaissance troops which were located in and around the town. With his kampfgruppe, Meierdrees held the town against repeated assaults by much larger forces.

The Knights Cross recommendation of Erwin Meierdrees reads as follows

SS-Obersturmführer Meierdrees, commander of the Sturmgeschütz-Batterie / SS-Totenkopf-Division, has participated in the Polish campaign, the western campaign and the campaign against the Soviet Union. On the 15.11.1939 he was decorated with the Iron Cross Second Class, and on the 15.01.1942 with the Iron Cross First Class.

Meierdrees was serving as part of Kampfgruppe Bochmann when the Russians penetrated friendly lines south of Staraya Russa at the beginning of January 1942, and in response to this development Meierdrees was initially deployed northeast and southeast of the city. His numerous bold attacks brought valuable relief to the hard-pressed Heer units in this area, and heavy losses were inflicted on the foe in the process. After the Kampfgruppe commander became a casualty SS-Obersturmführer Meierdrees rallied the remnants of the Gruppe and proceeded to conduct a determined defense of the village of Bjakowa (located on the Staraya RussaDemyansk road).

Since the end of January Meierdrees has held this village in a heroic struggle against overwhelming enemy attacks despite being encircled from all sides. Whenever the Russians fought their way into the village with strong tank and aircraft support they were always forced to retreat from their gains in the face of the bravely fighting troops under the bold and skillful leadership of SS-Obersturmführer Meierdrees.

The defenders of Bjakowa continue to stand their ground under the guidance of their heroic commander.

The holding of this village is of critical importance for the integrity of Fortress Demyansk, as the capture of this village would place another section of the road into enemy hands and bring them one step closer to linking up with those Russian forces pushing southwards from Gortschizy.

I ask that SS-Obersturmführer Meierdrees be awarded the Knights Cross to the Iron Cross on account of his heroic struggle and the success he has achieved.

The Oakleaves recommendation of Erwin Meierdrees reads as follows

1.) During the attack against the Uljanowka agricultural estate on the 01.03.1943 our Panzers were unable to advance due to the threat from a strong Pakfront. SS-Hauptsturmführer Meierdrees bypassed this Pakfront with his Panzer and attacked it from the flank with magnificent spirit. He personally crushed 4 heavy anti-tank guns beneath his tracks, and his brave deed opened up the enemys front for a pursuit thrust by our forces.

2.) During the early morning hours of the 03.03.1943 Meierdrees and his Panzer-Abteilung had a surprise encounter with a Russian column stretching 7 km in length (consisting of mostly artillery and anti-tank guns) whilst advancing towards Schljachowaja. SS-Hauptsturmführer Meierdrees immediately attacked this column on his own initiative, and by driving at the very spearhead of the attack he gave his troops the highest example of dutifulness and personal bravery.

The success was total. Several artillery detachments, over 40 anti-tank guns and several hundred trucks together with abundant quantities of assorted war materiel were destroyed or captured.

The 15 T-34s that were escorting the Russian column were all destroyed in the process.

3.) On the 07.07.1943 the enemy commenced their anticipated flanking thrust from Ternowka towards the RadinSchopino road with strong infantry and tank forces. In response SS-Hauptsturmführer Meierdrees engaged the attackers as the first friendly unit to do so (they therefore did not even have infantry support at first). Whilst driving amongst his point Kompanie he identified a large assembly of about a regiments worth of Russian infantry in the Dolshik ravine. These were presumably awaiting the arrival of their own armoured forces, which were located about 1.5 km to the east at the time.

SS-Hauptsturmführer Meierdrees immediately ordered his light Kompanie to attack these infantry. He personally led the Kompanie into the opposing ranks, and the foe was routed with heavy losses. After this he led both of his medium Kompanien in an attack against the hostile armoured forces. By skillfully inserting his forces into battle it was possible to destroy 5 tanks in a very short time (of which he personally took out 3). The remaining tanks pulled back to the east at top speed. This determined and energetic intervention by SS-Hauptsturmführer Meierdrees prevented the Russians from blocking the road.

4.) SS-Hauptsturmführer Meierdrees and his Abteilung repeatedly distinguished themselves during the seizure and defense of the Psel bridgehead. During the attack against the hutment near Kljutschi on the 12.07.1943 his Abteilung assailed a strongly fortified Russian defensive system which was occupied by infantry forces that were quite ready for defense against armour. As the rest of the Abteilung rolled over the trenches and proceeded to engage the enemy infantry further in the rear, the Panzer of SS-Hauptsturmführer Meierdrees was immobilized. He proceeded to bail out, rally the other bailed out crews of his Abteilung and then clear out the hostile positions in man-to-man close combat.

5.) During the attack against Hill 213.9 (on the Mius) Meierdrees and his Abteilung were amongst those in the first wave. He led his men forwards with indefatigable aggressiveness, and did not waver from even the strongest defensive fire. During this fighting his Panzer was knocked out twice, forcing him to bail out and engage in infantry combat with his crew. On the 01.08.1943 he rolled out with his Abteilung for the fifth time, and finally he and his men managed to circumvent the hostile anti-tank/artillery fire and take control of the hill. Strong infantry counterthrusts that were supported by tanks were repulsed.

6.) During the establishment of the Kolontajew bridgehead on the 19./20.08.1943 SS-Hauptsturmführer Meierdrees and his Abteilung distinguished themselves once again. Disregarding the strong enemy artillery and anti-tank fire that was falling on the village, he drove through the hostile gunfire, captured Hill 167.5 (located NE of the village) and held it against the strongest of opposing pressure. Here SS-Hauptsturmführer Meierdrees was wounded for the fifth time.

Awarded after his fifth serious wound late September 1943 at the Dniepr line in the Ukraine. Exact date unknown. 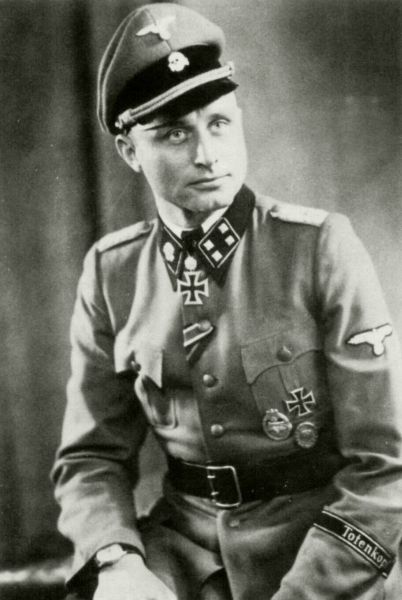