"One-two-three" Schulz was born on 11 February 1911 at Treptow on the Riga in the
Greifenberg region of Pommern.
He joined the Luftwaffe in 1934 and served for many years as an instructor.
On 3 January 1940, Schulz was transferred to 4./JG 27. He participated in the French campaign and the Battle of Britain. He recorded his first victory on 31 August
1940, when he shot down a RAF Spitfire fighter near Dover. By the end of 1940, he had four victories to his credit.
In April 1941, Schulz participated in the Balkans invasion. He recorded two victories over Greece, including a Greek PZL fighter shot down over the airfield at Larissa on 15 April and a RAF Hurricane fighter shot down near Megara on 20 April.
Schulz participated in the invasion of Russia. He claimed three victories during
June 1941, before the unit was transferred to the Mediterranean theatre in September.
Operating over the deserts of North Africa, Schulz was to be particularly successful. On each of the days 6 October 1941, 20 October and 28 November, he recorded three victories. Schulz shot down two RAF P-40 fighters on 30 November to record his 23rd and 24th victories. Both were piloted by notable Allied pilots: Australian, Sergeant Alan "Tiny" Cameron (6.5 confirmed, 1 probable and 7 damaged victories) of 3 Sqn, RAAF, who crash-landed and British pilot Pilot Officer Neville Duke (26.833 confirmed, 1 probable and 6 damaged victories) of 112 Sqn, RAF.
He claimed another notable RAF pilot on 15 December (30), when he shot down and killed Pilot Officer Geoffrey Ranger (5.3 confirmed, 1 probable and 1 damaged victories) of 250 Sqn, RAF.
It is also thought that Schulz was the victor, when he shot down a Curtiss P-40 flown by the Australian ace, Flying Officer Andrew "Nicky" Barr (11 confirmed, 3 probable and 8 damaged victories) of 3 Sqn, RAAF , who crash-landed in the Agedabia-El Brega area, wounded on 11 January.
He shot down five Curtiss P-40 fighters in 10 minutes on 15 February 1942 (40-44), including another British ace, S/L Ernest "Imshi" Mason (15.4 confirmed and 3.6 damaged victories) of 94 Sqn, RAF, who was killed in this engagement.

Oberfeldwebel Schulz was awarded the Ritterkreuz on 22 February and was promoted to the rank of Leutnant in April. On 31 May, Schulz recorded another Curtiss P-40 victory (49), flown by yet another notable Allied ace, South African Major Andrew Duncan (5.5 confirmed and 1 probable victories) of 5 Sqn, SAAF, who was killed in the engagement.
On 17 June 1942, Schulz was shot down and killed in aerial combat. He had shot down an RAF Hurricane fighter, flown by Canadian ace Flight Lieutenant Walter "Wally" Conrad (6.5 confirmed, 3 probable and 11 damaged victories) of 274 Sqn, RAF, who suffered wounds in the engagement, for his 51st, and last, victory. However, Schulz was then shot down in Bf 109 F-4 (W.Nr. 102 71) by a RAF Curtiss P-40 in the Sidi Rezegh area.
It is thought his victor was Canadian ace Flight Sergeant James "Eddie" Edwards (16 confirmed, 8.5 probable and 13 damaged victories) of 260 Sqn, RAF.
Otto Schulz was credited with 51 victories in approximately 400 missions. He recorded three victories over the Eastern front and 48 victories over the Western front.

Awarded following his achievement of 44 aerial victories and 332 sorties.

Posthumously awarded by the Italian Minister of Aerial Flight 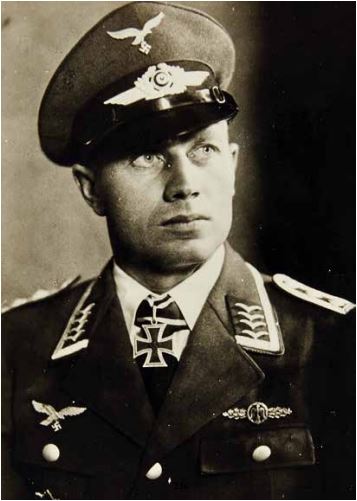