James Edwards was born in Nokomis, Saskatchewan but grew up in Battleford on Saskatchewan's Great Plains, Saskatchewan, during the Great Depression. As a youth, he worked on his uncle's farm, enjoyed hunting and excelled at high school hockey at St. Thomas College. When war came to Europe and Canada's mother countries, he sacrificed a scholarship to Gonzaga University, Spokane, and a tryout with Chicago's Blackhawks hockey team to enlist in October 1940 in the Royal Canadian Air Force (RCAF) and completed flight training in early 1941. By July he found himself at No. 55 OTU near Newcastle in the North of England undergoing fighter pilot training. In January 1942 Edwards was posted to 94 Squadron in Egypt as a Flight Sergeant. The squadron was flying Kittyhawks and became operational in March. On his first operational mission, escorting Boston's to the well defended Martuba airfield, he made his victory with the destruction of a Me 109F of Jagdgeschwader 27. By May, 94 Squadron had suffered heavy losses and was withdrawn from front line activity. Edwards was posted to 260 Squadron. On his first mission with 260 he damaged an Me 109 and on his second mission he destroyed another.
After being rested as a gunnery instructor with 203 Group at El Ballah, Edwards was promoted to Squadron Leader and joined 417 Squadron in Italy in November flying Spitfire Mk VIIIs. He was transferred to 92 Squadron in December as a flight commander also flying the Spitfire VIII. Eddie continued to add to his score with this unit in early 1944. By March he was posted to take command of 274 Squadron in England which was just re-equipping Spitfire Mk. IXs. Operations began in May and included patrols over the Normandy beaches and bomber escorts. In August the unit began conversion to Tempests for "anti-diver" (V1) sorties. Shortly afterwards, Squadron Leader Edward's second tour ended and he returned to Canada on leave.
After a few brief postings, he returned overseas in March 1945 becoming the Wing Commander Flying of 127 Wing. He managed to make three more claims before the war ended in Europe and he returned to Canada in August. His final tally at the end of World War II was 15 and 3 shared destroyed and 13 damaged. He was the third highest scoring pilot of the Royal Canadian Air Force. James Edwards remained with the R.C.A.F. after World War II. He commanded RCAF Centralia until March 1947. He served with a Search and Rescue unit in 1949 and at a recruiting center in 1950-51. In November 1951, he formed and commanded 430 Squadron which was the first Canadian unit to be equipped with F-86 Sabres. Edwards attended staff college in September 1955 and then he served at the USAF Air Defence HQ in Colorado Springs for four years. When Edwards returned to Canada in 1959 he went on a conversion course for the CF-100 "Canuck" All-Weather Fighter. In September 1962, he became Deputy Operations Officer of the 41st Air Division then in July 1966 he returned to Colorado Springs as a Plans Officer with NORAD. Under the Canadian Forces unification program, the Wing Commander became Lieutenant-Colonel Edwards and his final posting was as the OC Canadian Forces Station Badly Hughes. He retired in 1972 and took up residence in British Columbia.
The autobiography "Kittyhawk Pilot: Wing Cdr. J.F. (Stocky) Edwards" was written in collaboration with J.P.A. Michel Lavigne and is highly recommended reading for anyone interested in learning more about Stocky's wartime experiences or the desert air war in general.

Citation:
"Flight Sergeant Edwards is an extremely capable soldier and a superbly gallant fighter pilot. Since October 1942, he has destroyed six enemy aircraft while participating in numerous sorties over enemy territory. He has displayed outstanding coolness and courage in the face of opposition while his cheerful and imperturbable spirit has been an inspiration to the squadron."

Citation:
"In December 1942, Flight Lieutenant Edwards was commander of a formation engaged in patrol duties over our forward troops. During the flight ten enemy aircraft were encountered and Flight Lieutenant Edwards destroyed one of five which were shot down. Two days later he destroyed another hostile aircraft bringing his total victories to eight. This officer has invariably displayed outstanding gallantry and devotion to duty."

Citation:
"This officer has successfully completed a very large number of operational flights and has destroyed thirteen enemy aircraft. He is a keen and courageous pilot whose example and leadership have been most inspiring." 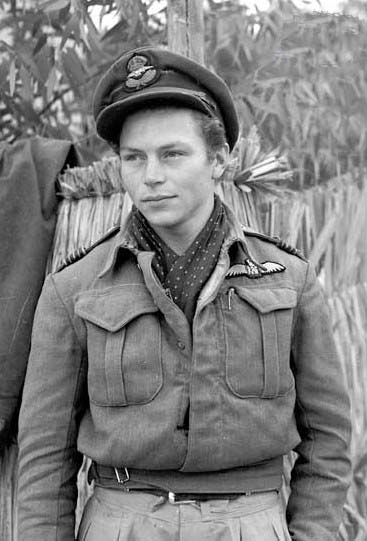