1.) Thrust from the village of Krassno Konstantinowka towards the southeast against Points 168.4 and 173.1 in order to enable the infantry to occupy a blocking position there.

2.) From there thrust eastwards against Hill 151.6. Through this counterthrust he was to throw back the broken-in enemy infantry and once again restore the old frontline for the right neighbour.

SS-Hauptsturmführer Biermeier fulfilled the first part of his mission. But as his armoured group was standing by on Point 173.1 a strong enemy tank formation to the west launched a southward thrust against the village of Myschelowka, within which was the firing position of the I./SS-Art.Rgt. 3.

SS-Hauptsturmführer Biermeier attacked the enemy tanks on his own initiative. In the fighting which followed he succeeded in completely destroying this hostile group between Myschelowka and Luganka after a bitter tank battle.

38 T-34s were destroyed without any total losses on our side. At the same time of our friendly armoured thrust a group of about 800 enemy infantry were launching their own attack from the northeast and east. However this enemy group was also smashed with heavy losses for the foe, and only a few survivors managed to pull back to the east. The result of this action was the thwarting of the enemys aim to roll up our positions towards the south and enter into the rear of the neighbouring division from the same point.

Just before nightfall SS-Hauptsturmführer Biermeier also managed to thrust eastwards towards Hill 151.6 and complete the original second part of his mission.

He personally destroyed 6 T-34s on this day.

SS-Hauptsturmführer Biermeier has proven himself to be an outstandingly brave and prudent leader during all the major offensive and defensive battles in the spring, summer and fall of 1943. So far, since March 1943, he has personally destroyed 31 enemy tanks.

2415th Award.
Submitted on December 6th 1943.
Preliminary document dated on December 17th 1943.
Awarding date of December 14th, 1943 according to his Personalakte, Bundesarchiv and not December 10th as in many sources is mentioned.

At around 22:30 on the 02.08.1944 a message was received that reported enemy infantry were moving from Trzebucze towards Grebkow via Stawiska. A further message at 03:00 on the 03.08.1944 reported that further enemy forces were assembling around Trzebucze and Sinoteka as well as in the forest southeast of Közki. By orders of SS-Sturmbannführer Biermeier the handful of available men were alerted and dispatched to take up security along the southern edge of Grebkow. At around 10:30 the 9./SS-Pz.Gren.Rgt. Theodor Eicke was ejected from its positions by much larger enemy infantry forces, and the enemy was thus able to continue their advance towards Grebkow.

SS-Sturmbannführer Biermeier resolved to launch an immediate counterthrust at the head of his Pionier-Zug, the still available messengers of his Abteilung and 2 Sturmgeschütze. Following bitter close-quarter combat the old frontline was once again restored at 12:45.

During this counterthrust the enemy lost:

The enemy infantry sustained bloody losses. The decisiveness of SS-Sturmbannführer Biermeier thus prevented a rolling up of the Divisions left wing.

On the 19.08.1944 the enemy commenced a major assault to the east and northeast of Sitki with strong infantry and tank forces together with overwhelming ground-attack aircraft support. Our own infantry took heavy losses from the powerful hostile drumfire, and the enemy was consequently able to achieve a breakthrough of our position. In this situation SS-Sturmbannführer immediately gathered up those Panzers of his Abteilung in the MichalowKlembow area on his own initiative. With these he immediately launched a counterthrust along with minor support from friendly Grenadiers of the Aufkl.Abt.

The enemy was thrown back, and the existing frontline gap was once again closed with weak friendly infantry forces. All the further enemy attacks that took place during the remainder of the day were repulsed by the Panzers. Although the enemy already had significant forces in his rear Biermeier continued to hold the old position with his Panzers in an almost hopeless situation. By doing so he enabled reserves to be brought up and ensured that the frontline ultimately remained in friendly hands.

The enemy suffered the following losses on this day during both the energetically conducted counterthrust and the subsequent defensive fighting:

The enemy losses in infantry were very high.

SS-Sturmbannführer Biermeier was under no illusions as to the magnitude of the situation, and initially dispatched 2 Panzer IVs to secure the RoszczepKraszew road at Point 99. After the enemy had also penetrated the line near Klembow and were advancing towards the Kraszew road, SS-Sturmbannführer Biermeier sent in a Panzer IV that had just come from the repair shop to Point 103 in order to provide security to the south. This vehicle could overwatch the entire streambed. After the friendly infantry had pulled back, and the order to retreat had likewise come through, the Panzers of II. Abteilung under the command of SS-Sturmbannführer Biermeier also pulled back slowly but surely. At this stage the enemy attempted to disrupt our withdrawal movements from the west and thrust into the rear with armoured forces. In these circumstances it was once again SS-Sturmbannführer Biermeier who fearlessly mounted up onto the nearest armoured vehicle and led the still available Panzers in a counterthrust. In the process he personally destroyed 2 KV-85s from very close range, and the enemy were prevented from achieving their aim.

While this combat was ongoing the enemy moved out of the forest 1 km northeast of Rasztow with tanks and infantry. They headed southwards in an attempt to prevent our forces from crossing over the Rzadza river. Realizing this threatening predicament, SS-Sturmbannführer Biermeier once again set out towards the enemy with 2 Panzers and inflicted a crushing blow upon the foe.

Biermeiers personal courage and iron will ensured that the withdrawal movement by the left wing of the Division could be carried out according to plan. The enemy lost:

The enemy losses in infantry were extremely high.

During the early morning hours of the 02.09.1944 the enemy commenced a westward attack with 40 tanks from the area north of Duza. They succeeded in ejecting the friendly infantry from the eastern part of Nadma. After this they swing around to the south in order to cut off the right flank of the Division. In this situation SS-Sturmbannführer Biermeier once again distinguished himself as a determined and ruthless commander. He launched a counterthrust with 4 Panzer IVs on his own initiative from Brzozowka towards Nadma, sealed off the penetration and restored contact with those friendly forces still fighting in the western part of Nadma. With this the enemy assault wedge was cut off, and the encirclement of the Divisions right wing was prevented. The following was destroyed over the course of ferocious combat:

The enemy personnel losses were high.

On the 13.09.1944 the enemy tried to thrust from the southeast against Siwki and Mari so as to interdict the StrugaPraga road. Their first night attack at 02:00 had to be broken off due to high losses, but they relaunched their efforts at 05:30. To achieve their objective they sent in a large number of tanks and infantry. SS-Sturmbannführer Biermeier led his 5. Kompanie with unshakeable courage and extreme bravery, once again contesting the enemys success. Over the course of the day the enemy attacked Marki 5 times, however every time they were repulsed due to the steadfastness of the commander of the II. Abteilung and his 5. Kompanie. He only ordered his Panzers to conduct a fighting withdrawal after the friendly infantry had occupied their ordered position during the evening. Over the course of harsh combat the enemy infantry sustained bloody losses, and the following weaponry was also destroyed:

SS-Sturmbannführer Biermeier has consistently distinguished himself as an outstanding leader with great tactical abilities and utter ruthlessness during all the operations of his Abteilung, and often with only a minimal number of Panzers. These major successes are above all attributable to his personal courage, ever-present decisiveness and exemplary steadfastness. 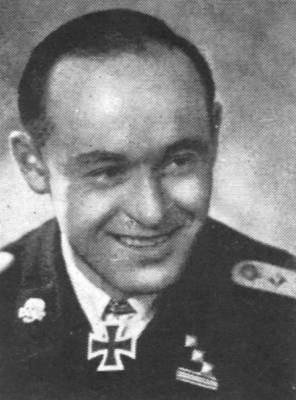