For the fifth silver.

Awarding according his own saying was September 15th, 1944.

Recommendation:
Following a bitter struggle, on the morning of the 11.03.1945 the enemy succeeded in capturing the homestead Meiri (located east of Frauenburg) with a strong armoured group. This was a particularly noteworthy enemy achievement, as Meiri was atop of a commanding height. From this key position it was possible to dominate both the railroad Frauenburg-Doblen as well as the road. The capture of this hill was also synonymous with a breakthrough and rolling up of the front up to Frauenburg, something which could not be prevented. Leutnant Egghardt and another 5 Sturmgeschützen had the mission of creating a blocking position north of Meiri. As he was well aware of the gravity of the situation, he decided to commence a counterattack on his own initiative. The attack was carried out with great spirit and determined resolve, and Leutnant Egghardt did not hesitate to lead from the front. After a short but intense battle the enemy was pushed back off the hill. In this decisive engagement the main gun of Egghardts vehicle become inoperable due to a mechanical failure. To make matters worse, the Russian command tank was fighting from a very good firing position between two farm buildings, and from here the Sturmgeschützen were unable to effectively combat it. But at the same time the attack could not be allowed to fail under any circumstances.
Thus Leutnant Egghardt jumped out of his Sturmgeschütz when it was relatively close to this tank. Armed with a Panzerfaust, he went to ground while defying the MG fire all around him. He destroyed this enemy tank from a 20 metre range, and in doing so destroyed his 6th tank in close combat.
Leutnant Egghardt is a model of a good fighter, and he has distinguished himself through his bravery in all operations. As a lone fighter he belongs to one of the few such soldiers whose boldness is unquestionable on account of their repeated and ruthless commitment to combat. The destruction of his 6th tank in close combat places him as among the best of our bravest soldiers. Over the course of this battle his Batterie destroyed 15 enemy tanks. Egghardts personal share would ultimately amount to 7 after his main gun was once again brought back online. His total of destroyed armour has thus risen to over 30 tanks.
Egghardts determined and brave action eliminated the enemys attacking spearhead. It also prevented a hostile penetration and breakthrough to the railway and road, which no doubt represent the lifeline of Fortress Courland. I therefore hold Leutnant Egghardt as particularly worthy of being awarded the Knights Cross to the Iron Cross. He has exhibited nothing but dutiful bravery, boldness and decisiveness time and again. 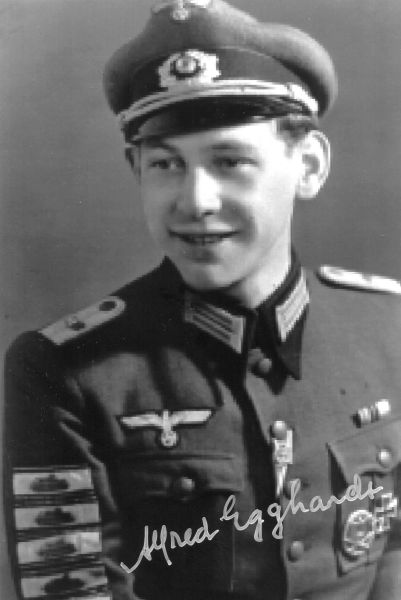