He was a graduate of Andrew Jackson High School, St. Albans, New York, and Roosevelt University, Chicago, Illinois, where he was awarded a Bachelor of Science degree in Business Administration. He received his Master's Degree in International Affairs from George Washington University, Washington, DC.
He enlisted in the US Naval Reserve on 19 August 1942. As an Aviation Cadet (V-5), he had instruction at the University of North Carolina at Chapel Hill and the Naval Air Stations, Olathe, Kansas and Corpus Christi, Texas, until July 1943. He was commissioned Ensign in the US Naval Reserve on 21 July 1943 and designated Naval Aviator.
He was Assistant Engineering Officer of Torpedo Squadron ONE HUNDRED FIFTY during the period November 1944 to August 1945 and on 12 September, that year was released from active duty. While a member of the Inactive Reserve, he was attached to Attack Squadron EIGHTY-SIX-E, New York, New York.
Returning to active duty on 15 July 1948, he joined Attack Squadron ONE-L as Aviator and Assistant Administrative Officer and in August 1949 transferred to Air Development Squadron THREE to serve as Assistant Maintenance Officer and Project Pilot until January 1950. After a period of indoctrination at the Naval Communication Station, Washington, DC, he had duty from June 1950 to March 1951 at the Armed Forces Security Agency, Washington, DC. Completing three months' instruction at the Naval Air Station, Pensacola, Florida, he became a Flight Instructor at the Naval Auxiliary Air Station, Whiting Field, Milton, Florida, in June 1951.

Following instruction at the Naval War College, Newport, Rhode Island, August 1968-June 1969, he reported as Head of the Budget Analysis and Appropriation Coordination Branch in the Office of the Chief of Naval Operations, Navy Department, Washington, DC. For meritorious service while attached to the Office of the Chief of Naval Operations, he was awarded the Navy Commendation Medal. In December 1970 he became Deputy Chief of Naval Air Reserve Training, Naval Air Station, Glenview, Illinois and in January 1972 reported as Deputy Commander Naval Air Reserve with additional duty as Chief of Staff and Aide to the Commander Naval Air Reserve, Naval Air Station, Glenview.
He subsequently advanced in rank to that of Rear Admiral, to date from 1 July 1972.

The President of the United States of America takes pleasure in presenting the Navy Cross to Ensign Richard Gustaf Altmann (NSN: 0-299545), United States Naval Reserve, for extraordinary heroism in operations against the enemy while serving as Pilot of a carrier-based Navy Combat Plane in Composite Squadron THREE (VC-3), attached to the U.S.S. KALININ BAY (CVE-68), in aerial flight against major Japanese Fleet Units in the Battle of Samar Island on 25 October 1944. Ensign Altmann made a bombing attack on a Japanese battleship obtaining one hit and a near miss. Upon firing his rockets at the same ship he obtained four hits amidships causing an explosion. Continuing his attack he strafed and fired his remaining rockets at an enemy cruiser scoring two hits. Realizing the urgency for inflicting further damage to the enemy he landed at Tacloban airfield on Leyte Island, re-armed and returned to the battle obtaining two direct bomb hits on a Japanese heavy cruiser. He made these repeated attacks in the face of devastating anti-aircraft fire inflicting damage on the enemy and at the same time diverted anti-aircraft fire from other planes that were attacking, thus materially assisting in saving our own forces from destruction. His conduct throughout was in keeping with the highest traditions of the United States Naval Service.

The President of the United States of America takes pleasure in presenting the Distinguished Flying Cross to Lieutenant, Junior Grade Richard Gustaf Altmann (NSN: 0-299545), United States Naval Reserve, for heroism and extraordinary achievement while participating in aerial flight as Pilot of a Torpedo Bomber Plane in Composite Squadron ONE (VC-1), during operations against enemy Japanese forces in the Palau Islands from 16 to 20 September 1944. Completing his twentieth mission during this period, Lieutenant, Junior Grade, Altmann carried out observation flights with a Marine Observer over Peleliu and pressed home effective strafing, rocket and bombing attacks against hostile artillery and mortar emplacements, thereby contributing materially to the success of his plane in the infliction of damage on the enemy. His skilled airmanship and courageous devotion to duty in the face of anti-aircraft fire which damaged his plane on one observation flight, were in keeping with the highest traditions of the United States Naval Service.

with 4 gold stars
for completing thirty missions against the enemy in the Marianas Islands, Palau Islands and Philippine Islands during the period 16 June to 24 October 1944

The President of the United States of America takes pleasure in presenting the Legion of Merit to Captain Richard Gustaf Altmann (NSN: 0-299545), United States Naval Reserve, for exceptionally meritorious conduct in the performance of outstanding services to the Government of the United States as Deputy Commander Naval Air Reserve and Deputy Commander Naval Air Reserve Force from January 1971 to February 1973. Throughout this period, Captain Altmann contributed significantly to the increased readiness, efficiency and mobilization potential of the Naval Air Reserve Force. Largely as a result of his untiring effort, perseverance and exceptional knowledge of financial management, the Naval Air Reserve was upgraded to major claimancy status. Captain Altmann provided the overall guidance and direction for development and implementation of a comprehensive plan for upgrading the Fleet support program. Further, he has provided continuous and enthusiastic support of the Navy's public affairs program by representing the Navy at national, regional and local conferences of military-oriented, civic, and fraternal organizations, thereby contributing significantly to the emergence of a fuller understanding of the importance of Seapower. Captain Altman was directly responsible for the smooth and expeditious implementation of the consolidation of the Naval Air Reserve and Naval Surface Reserve. By his consistently sound judgment and inspiring devotion to duty throughout, he upheld the highest traditions of the United States Naval Service.

The President of the United States of America takes pleasure in presenting a Gold Star in lieu of a Second Award of the Legion of Merit to Rear Admiral Richard Gustaf Altmann (NSN: 0-299545), United States Naval Reserve, for exceptionally meritorious conduct in the performance of outstanding services to the Government of the United States while serving in the Office of the Chief of Naval Operations and Deputy Director of Naval Reserve from March 1973 through August 1975. During his tenure, Rear Admiral Altmann made direct and significant contributions to the Naval Reserve and the U.S. Navy. Utilizing a superb understanding of the organization, functions, and capabilities of the navy Department, he applied flawless judgment in planning, coordinating, and directing the consolidation of the two major field organizations of the Naval Reserve, and concurrently established the office of the Director of Naval Reserve as a major staff office under the Chief of Naval Operations. An extremely competent, dynamic, and resourceful leader, Rear Admiral Altmann demonstrated exceptional knowledge of all facets of planning, programming, and budgeting functions supporting the Naval Reserve. Responsible for a wide variety of programs vital to the Naval Reserve, he relentlessly kept abreast of all significant details in order to render forthright, convincing advice to the Secretary of Defense and Congress. By his peerless performance, brilliant leadership, and steadfast devotion to duty, Rear Admiral Altmann reflected great credit upon himself and upheld the highest traditions of the United States Naval Service 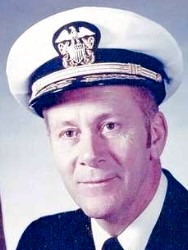