He was part of the 91st bomb group (Heavy), 8th Air Force division, US Army Air Forces in WWII.
Harry flew 25 missions in the B17, and was shot down (Europe).
He returned for a second tour in the B24 and was again shot down.
He was reported a prisoner of was but actually evaded capture using the Belgium underground.
His awards include 2 Purple Hearts, 2 DFC (Distinguished Flying Cross) and 8 Air Medals.

Citation:
"For extraordinary achievement and heroism while serving as Co-navigator of the leading airplane of his Group on a bombing raid over Germany, 21 May 1943. Just before reaching the target, Captain Ackerman was seriously and painfully wounded by an exploding 20 MM cannon shell. With complete disregard for his wounds, Captain Ackerman bravely continued firing the nose guns and skillfully fought off fierce frontal attacks by enemy fighter planes. When the attacks ceased, Captain Ackerman collaborated with the group-navigator, who was also wounded, in returning the formation to its home base. The bravery, skill and devotion to duty displayed by Captain Ackerman on this occasion reflect the highest credit upon himself and the Armed Forces of the United States." 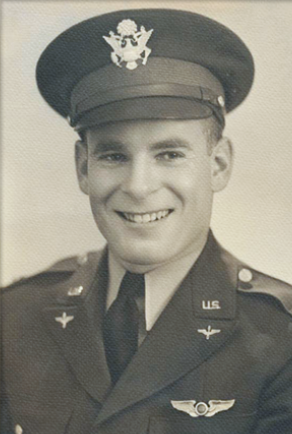