Sergei Biryuzov was killed on October 19th, 1964, together with 32 others, when their Ilyushin Il-18 crashed against mount Avala near Belgrade. 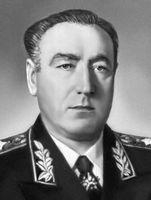