Jan Willem Zijlstra was both son and grandson to KNIL Infantry Officers. He started his education in Java and completed Highschool in the Netherlands in 1929. As family tradition he entered the Dutch Royal Military Academy and was commissioned as 2nd Lieutenant, Infantry on July 31st 1932. He was directly placed in the KNIL in the Dutch East Indies (Koninklijk Nederlands-Indisch Leger, Royal Dutch Indies Army - KNIL Army No. 102417002).
When war broke out he was on leave in the Netherlands and directly recalled to Java. During the next months he was promoted to 1st Lieutenant (July 31st 1941). December 15th he arrived on expedition to Koepang in Dutch Timor as part of the Australian "Sparrow Force". As a part of an agreement with the Dutch-British-Australian governments, he was sent with a small detachment to the Portuguese side of the Island. After the Japanese invasion the troops were forced to withdraw in the jungle and surrounding mountains and organised a guerrilla campaign. With a force of about 600 men they kept the Japanese busy, now and then with the help of the native population. Finally the Japanese stationed over 30.000 men to try and drive them out. After the capitulation on Java, the Timor force was the only Allied force still engaging the Japanese for most part of 1942.
Finally the force had to be evacuated and Zijlstra went to Australia, where he attended the Australian Army Intelligence School in Victoria and the Jungle Warfare Training Centre in Queensland. On May 27th 1943 he was promoted to Captain. He arrived on Dutch soil again when he arrived with the No. 3 (Timor) Company at Merauke, Dutch New Guinea. The unit was attached to the Australian 11th Brigade and for a short time to the United States 8th Army on Biak Island. Between January and April 1945, the Dutch No.3 Company accounted for more of the enemy losses than the whole United States Forces in the area. In April they went to Morotai and took part in the building up of the amphibian forces for the assault on Tarakan, British North Borneo and the liberation of the oil fields round Balikpapan on the Dutch side of the Island. Jan Zijlstra landed as commander of the 1st Company KNIL at Balikpapan, together with the Australian 7th Division.
After the Japanese capitulation, the 1st Company KNIL was one of the first Dutch troops to arrive on Java to liberate the POWs and set up the organisation of the renewal of the Dutch Government. From the first moment of arrival they had to deal with rebelling Indonesian Nationalists.
Shortly after Jan Zijlstra was reunited with his wife and children who survived the Japanese imprisonment camps.

After the War, Jan served with the Dutch military and when the KNIL was demobilized in 1950, he chose to immigrate with his family to Australia.

Citation:
"As commander of his section on September 16th 1942 near Ossu (Portugese Timor) by excellent choice, and determined actions in ambush, inflicted losses to an overwhelming Japanese section of 24 dead enemies and some enemy vehicles." 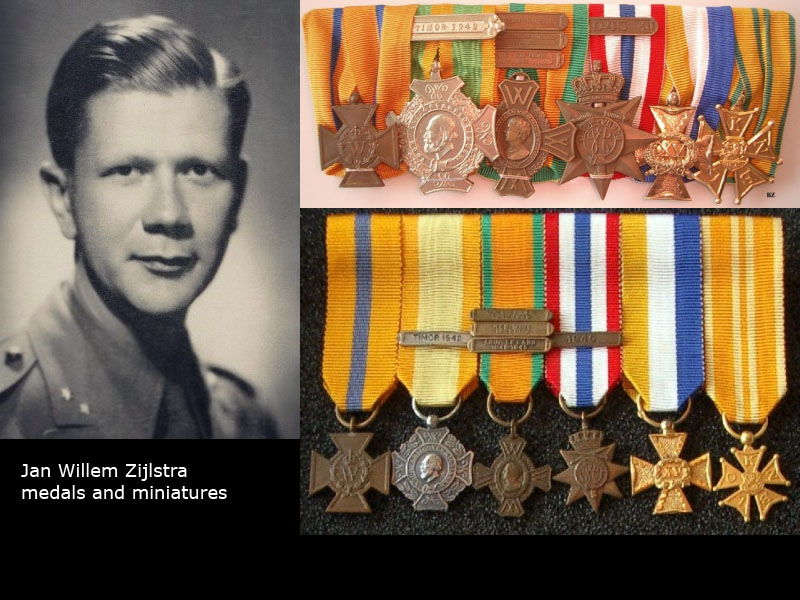