On the 06.11.1944 Leutnant Lutz received the order to participate in a large-scale counterattack, in which his role was to take his Zug and capture the village of Vossenack from the south. The neighbouring formations were to attack it from the north and east. Despite the heaviest defensive fire from all weapons, including direct fire by enemy tanks, Lutz and his men succeeded in taking their assigned portion of the village.

After breaking into the village he was able to grasp the overall situation: The attacks of the other German forces had bogged down in heavy defense fire, and only Lutz and his Zug had managed to get as far as the village. All connection to neighbouring units had been lost. The enemy tanks and APCs had bypassed him to the rear and were currently pushing in the direction of the Mestringer mill. Their obvious goal was to catch the Panzer-Aufklärungs-Abteilung employed there in a flank attack and prevent the imminent encirclement of their American comrades at Kommerscheidt.

In light of this situation, Leutnant Lutz made the independent decision to thwart this enemy move to the best of his abilities. At the very least he would try to throw the enemy into confusion close a the frontline gap by drawing closer to the rest of his Kompanie. And so, without hesitating on account of the inferiority of his force against tanks and APCs, he attacked the much larger enemy group with his Zug. At the head of his men he personally destroyed 2 fully-manned American APCs and 1 armoured command vehicle in the first attack with Panzerfausts. As the AT weapons of his Zug were thereby expended, he and his Zug were attacked by enemy tanks while still being deployed on open ground. In order to save his men he gathered everyone together and charged the enemy tanks while firing with all their weapons, personally shooting off his machine-pistol and inspiring his men by his example. With a loud Hurra they approached the enemy tanks, who were intimidated by this fierce attack and forced to fall back.

Through this action Lutz succeeded in resupplying his men after rejoining the Kompanie and closing the existing frontline gap. His attack also managed to confuse the enemy as planned, and the Americans halted their attack on the Mestringer mill in order to reform in a secure area.

After this was completed 5 enemy tanks drove towards Lutzs position, making a new attempt to break through to the mill. Immediately Leutnant Lutz hurried into action, procuring 2 Panzerfausts and some hand grenades, and worked his way to within a few metres of the tanks. With the 2 Panzerfausts he destroyed one enemy tank at very close range and set a second one on fire with hand grenades. At the same time the other enemy tanks were destroyed with Panzerfausts by an Oberfeldwebel from the left neighbouring formation. With this the attempted enemy armoured breakthrough to Mestringer mill was once again stopped in its tracks.

Leutnant Lutz (who was still suffering from the effects of an old wound) was once again wounded twice while leading a forcefully conducted attack on Würselen, however stayed with his men by his own wish. He is the model of an experienced and outstandingly brave frontline officer, who demands the utmost of himself. Through this superbly led operation he prevented a dangerous breakthrough by a much superior combat force against the Mestringer mill, while removing a great danger to the flank of the Panzer-Aufklärungs-Abteilung. He thus made a major contribution to the later encirclement of strong enemy forces south of Mühle, near Kommerscheidt.

Following this action Leutnant Lutz was once again heavily wounded by a shell splinter on the 08.11.1944. 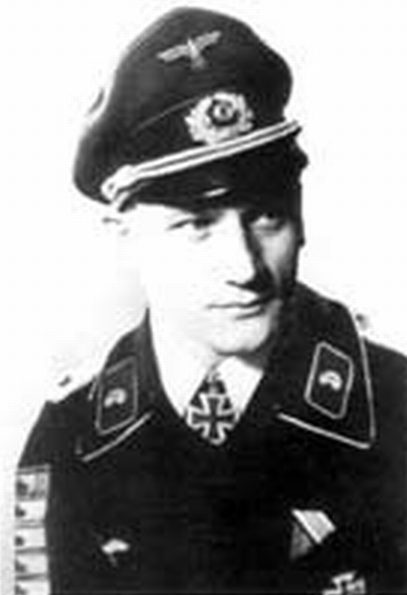